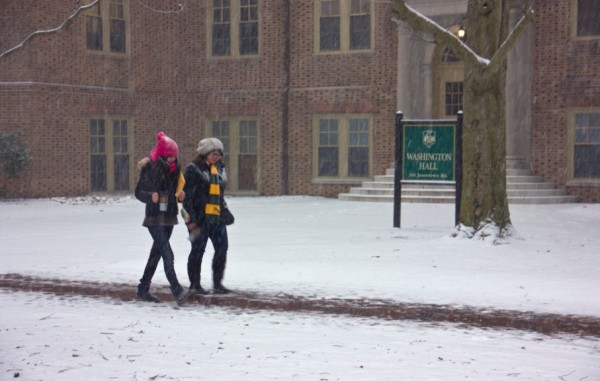 It’s fairly easy to dismiss students’ complaints about the College of William and Mary’s characteristic reluctance to close in the case of inclement weather. No one wants to go to their 8 a.m. classes, after all; everyone would rather stay warm in their beds for a few more hours, and so most complaints can be dismissed as the whines of students who just don’t want to have to bundle up. Some complaints, however, should be recognized as legitimate, like the ones about the College’s decision to not only not close but also to not even give students a delay two weeks ago during the Feb. 15 snowstorm.

It started snowing around midnight on Valentine’s Day. Walking back from Earl Gregg Swem Library around 1 a.m., my friends and I rejoiced in the falling snow. We were absolutely certain there wouldn’t be any classes the next day and so, like fools, stayed up obscenely late. I’m sure you can imagine my horror the next morning when 9 a.m. rolled around and my inbox remained terribly, terribly empty.

Watching people attempt to navigate the sidewalks would have been amusing if it wasn’t so mildly horrifying. Students shuffled by, taking tiny, half-inch steps so that they wouldn’t lose traction on the half-inch of ice slicking the walkways.

Yes, I was sleep-deprived and grumpy when I headed out to my 10 a.m. class that morning, but I am able to step back and look at this from an objective standpoint; classes should not have been held. It was dangerous for fully able-bodied students to get there, let alone students with disabilities. Getting to class in a wheelchair, for example, would have been absolutely out of the question. Watching people attempt to navigate the sidewalks would have been amusing if it wasn’t so mildly horrifying. Students shuffled by, taking tiny, half-inch steps so that they wouldn’t lose traction on the half-inch of ice slicking the walkways. It was safer to walk in the grass, through the slush and snow, than on the actual bricks. The stairs by Millington Hall were very near impossible to ascend; the steps by the Terrace were absolutely treacherous. The temperature was not above freezing, the paths hadn’t been salted, and I watched several students completely wipe out trying to climb steps.

One student, attempting to make their way to class on an icy day in 2000, slipped and broke her leg, resulting in months of recovery; 16 years later, the College has still barely wavered in their stringent closing policy.

As someone who had classes beginning in the morning and going through the afternoon that day, I agree that by midday the temperatures had begun to rise and the ice was beginning to turn to slush, which, while admittedly nasty, wasn’t as dangerous as the earlier ice slicks had been. This only started to happen after noon, however. Delaying school that day until noon would have been the smart answer. Starting school on time was, with the condition of the walkways around the school, frankly ridiculous. This doesn’t even address the conditions of the roads that commuters and off-campus students would have had to face, which were doubtless as bad or worse than the walkways.

The College has a history with their reluctance to close school. One student, attempting to make their way to class on an icy day in 2000, slipped and broke her leg, resulting in months of recovery; 16 years later, the College has still barely wavered in their stringent closing policy. The admonition to stay home if you don’t feel safe coming to class doesn’t cut it when professors take attendance, you can’t make up the material or you have an exam in class that day.

It is my firm belief that, on days when the paths are iced over early in the morning and temperatures aren’t predicted to rise above freezing before noon, the College should be more amiable to a noon delay at the very least. I say this not as a student trying to get out of class (my 10 a.m. lecture is a delight, I promise) but as a student genuinely concerned about early-morning injuries that could easily be avoided if the ice was given more time to melt.