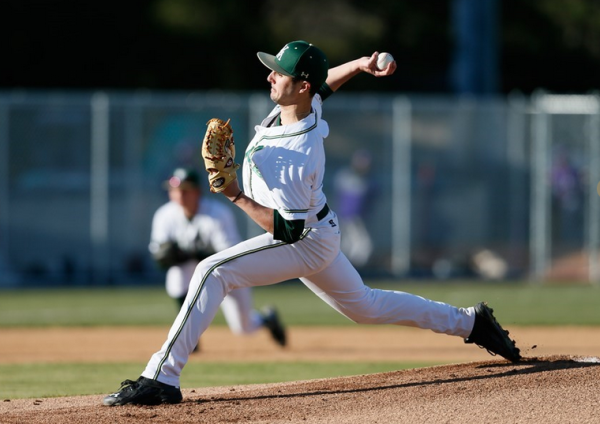 William and Mary hosted Holy Cross at Plumeri Park in a three-game series this past weekend, sweeping the Crusaders to move to 5-2 in the season, recovering from the 8-4 loss to Liberty last week. Throughout the Holy Cross series, the Tribe showed its resiliency, coming from behind to win each game. The College won 8-5 Friday, and the Tribe proceeded to take Saturday by a 6-5 score and Sunday with a 12-11 finish.

On Friday, the Tribe (5-2, 0-0 Colonial Athletic Association) got off to a fast start.  After Holy Cross (1-5, 0-0 Patriot League) hit a solo home run in the top of the first, sophomore infielder Ryan Hall responded with his own solo shot to knot the score at 1 apiece.  Also in the bottom of the first, junior pitcher Charles Ameer delivered a three-run homer after a walk and a base hit put two runners on for the Tribe.  In the bottom of the second inning, sophomore infielder Cullen Large doubled to drive in two more runs, leaving the score at a 6-2 Tribe advantage after two innings. In the top of the third, Holy Cross drove in three runs to tighten the margin to 6-5, but William and Mary responded in the bottom of the inning with a home run from junior infielder Ryder Miconi and a sacrifice fly from freshman catcher Hunter Smith to push the lead to 8-5, where it would remain for the rest of the game.

On Saturday, the Tribe didn’t start nearly as strong as they did the previous day. In the top of the third inning, Holy Cross widened its lead to 3-0 and was showing few signs of slowing down the pace.  Senior centerfielder Josh Smith responded with an RBI single in the bottom of the third, and freshman third baseman Zach Pearson drove home a run with a sacrifice fly in the bottom of the fourth, cutting the Tribe deficit to just one, 3-2 reading on the scoreboard.

However, Holy Cross scored twice more to leave the score 5-2 going into the seventh inning.  A wild seventh inning resulted in three unearned runs for the Tribe following an errant pitch and an error in the field, tying the score at 5.

The score remained tied at 5 as the game entered the bottom of the ninth inning.  Smith hit a sacrifice fly to drive home redshirt freshman infielder Kyle Wrighte. The Tribe won in fashion, walking off for a 6-5 victory.

The Sunday game between the two teams was quite an offensive performance, with a total of 29 hits and 23 runs for the two teams.  The Tribe again found themselves in a deficit, trailing 9-6 after the top of the sixth inning.  In the bottom of the sixth, Miconi hit a 2-RBI double as part of three runs driven in the inning for the Tribe.  After the inning, the score was knotted at 9.

After Holy Cross scored a run in the top of the seventh, Large blasted a deep three-run homer to put the Tribe ahead for the first time all afternoon, 12-9. One more Holy Cross run couldn’t stop the Tribe, and the final score held for a 12-10 victory. Right-handed junior pitcher Aaron Fernandez improved to 1-0 in the season while Gaouette picked up another save, his third of the year.

The Tribe looks to keep their strong start rolling as they hit the road for a nine-game road trip, starting against Virginia Tuesday at 3 p.m. in Charlottesville, Va.