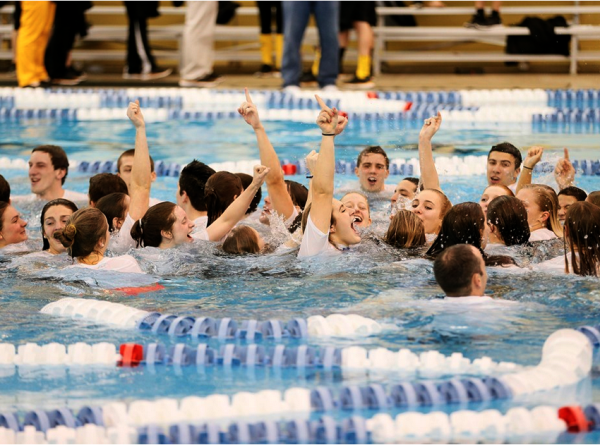 For the first time since 2006, one team will be taking home both Colonial Athletic Association Championship trophies. William and Mary stormed to victories on both the women’s and men’s side in the four-day CAA Championships in Richmond from Feb. 24-27, culminating with both teams being crowned champions Saturday night. These victories also mark the first time the College has claimed both titles since the CAA formed in 1985.

The weekend was capped by a string of individual star performances that saw four Tribe swimmers qualify for Olympic trials Sunday. Junior Jaimie Miller and her freshman sister Annie Miller both will swim the 50-yard free, while men’s seniors Will Manion (100-yard backstroke) and Jeremiah O’Donnell (100-yard and 200-yard breaststroke) also qualified.

The men’s team had a 2015 title to defend and did so in style, breaking the school points record (784.5) and CAA points record (previously held by James Madison at 832) en route to a 969.5-point demolishing of the competition. The next-closest team, Towson, trailed by almost 400 points.

The men’s team had a 2015 title to defend and did so in style, breaking the school points record (784.5) and CAA points record (previously held by James Madison at 832) en route to a 969.5-point demolishing of the competition.

The women’s team, meanwhile, was not so heavily favored. James Madison took the lead briefly after the 200-yard freestyle event Friday, and it appeared as though the championship may have slipped away. However, four William and Mary swimmers placing in the 100-yard breast, along with junior Sophie Rittenhouse blasting the CAA record in the 100-yard backstroke (53.71), opened up a 19-point gap going into the final day.

Saturday, the Tribe showed up to close the deal. Freshman Morgan Smith set a school record and freshman record, swimming the 1650-yard freestyle in 16:36.86, while Jaimie Miller won the 100-yard free. Five athletes placed in the 200-yard breaststroke to bring home the win.

Director of swimming Matt Crispino ’02 and his staff earned Men’s and Women’s Coaches of the Year honors for the first time.

For some swimmers, the season will continue next month. The NCAA Division I Championships will see Tribe swimmers travel to Atlanta, Ga., from March 23-26. Meanwhile, the Tribe’s top swimmers will have to wait until June 26 to compete in Omaha, NE in the U.S. Olympic Trials, while this year’s U.S. Open kicks off Aug. 2 in Minneapolis, MN.