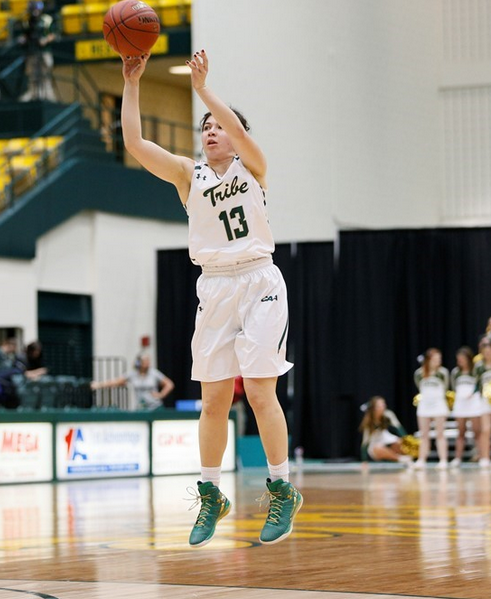 William and Mary split the final weekend of the regular season with a win over Towson on the Tribe’s senior night Friday in Williamsburg, Va., before falling to Drexel Sunday afternoon in Philadelphia. The games were mirror images of each other, as the visiting team in each instance was up in the first quarter before tightening the game with a strong mid-game run and scoring double the opponent’s points in the final quarter.

Friday’s game at Kaplan Arena ended 78-65 in favor of the Tribe (15-13, 6-11 CAA), although the Tigers looked dominant to start, holding a 21-14 lead after the first quarter. Junior guard Marlena Tremba drained a three-pointer at the buzzer, creating some momentum for the College entering the second quarter. Towson (6-21, 3-13 CAA) opened the second quarter on a 9-0 run to extend the score to 30-17 with five minutes and 57 seconds before halftime, but the College responded with a relentless run. After the 9-0 run, the Tribe scored 16 points while only giving up a lone free-throw point over the final 5:48 of the half. Sophomore forward Jeanne Gaumont gave the College its first lead of the game with a buzzer-beating layup to make the score 33-31 entering the locker room.

“Great composure I thought on the offensive end,” head coach Ed Swanson said. “If we do share the ball, and we’re moving pretty good, I think we have good enough shooters where we’re going to knock those shots down more times than not.”

The third quarter against Towson featured eight lead changes after the first half only had one, as each team fought to salvage sub-par seasons. Every time the Tribe took a lead of one or two points, the Tigers responded to claim leads of their own, the possessions moving quickly on both sides of the floor. For the third consecutive quarter, the College essentially made a buzzer-beater, this time by junior forward Alex Masaquel with a layup with a foul drawn to make a go-ahead free throw with less than one second on the clock. After 30 minutes, the Tribe was ahead 54-53.

With the game on the line in what had been a close matchup, the Tribe went off on a tear to outscore the visiting Tigers 24-12 in the final 10 minutes. The College established as much as a 16-point lead with 61 seconds remaining with the score at 78-62, eventually ending the game up 78-65.

Masaquel led the team with a career-high 28 points on 12 for 15 shooting from the floor and perfect 4 for 4 free throws. She also led the team in rebounds with four. Tremba also scored over 20 points, just missing a double-double at 22 points and a team-high seven assists, propelled by 5 for 6 from beyond the arc. The Tribe finished 29 for 53 from the floor, 9 for 15 from range, and 11 for 18 at the free throw line. Most notably, only one three-point attempt of seven attempts was missed in the second half.

“Coach had been working with us down in the post … teaching us how to finish a lot harder and I guess I brought that tonight,” Masaquel said.

The script flipped Sunday as Drexel (16-12, 12-5 CAA) pulled off almost the same feat William and Mary performed earlier in the weekend, topping the Tribe 69-53 in the final road game for the College’s season.

The Tribe began strong, holding a 20-11 lead after one quarter. After Drexel scored the first five points, the College added 17 consecutive points from the floor, range and the free-throw line. A 13-point lead established by a three-point dagger from senior guard Brooke Stewart put the Tribe ahead 20-7 with 1:38 to go in the first quarter, the momentum heavily favoring the visitors. This would prove to be the biggest lead of the game as the Dragons fought back to take the game, hoping to win back their senior day at the Daskalakis Athletic Center.

The College was held to just 10 points in the second quarter while Drexel put up 18.  After the disappointing quarter, the Tribe held just a single-point lead at 30-29 at halftime, courtesy of a Gaumont layup at the 27-second mark.  Gaumont’s score erased Drexel’s first lead of the game, which had lasted less than 20 seconds. While there wasn’t a straight run like the Tribe had in the second quarter Friday, it eerily reflected the momentum changes of that game, though the College was on the opposite side of the equation.

Coming out of the locker room, the two squads went back-and-forth, exchanging baskets as well as rebounds for several missed opportunities on both sides. At the end of the period, Drexel held its first end-of-period lead at 44-42.

Not wanting to disappoint on senior day, Drexel shut down the Tribe in the final quarter, outplaying in all aspects for the whole 10 minutes. The Dragons achieved a 15-point lead at 6:02, 4:42 and 4:13, never dropping below a 13-point lead in that time. A late College three-pointer brought it within 10 at 2:29, but it would prove not to be the start of a comeback bid but rather of desperate death throes.  The Dragons won 69-53, capping the quarter with a three-pointer for the 16-point lead with six seconds on the clock. Masaquel led the Tribe once again with 16 points and six boards.

William and Mary’s regular season finale is Wednesday night in Kaplan Arena, where the Tribe hosts Elon at 7 p.m.