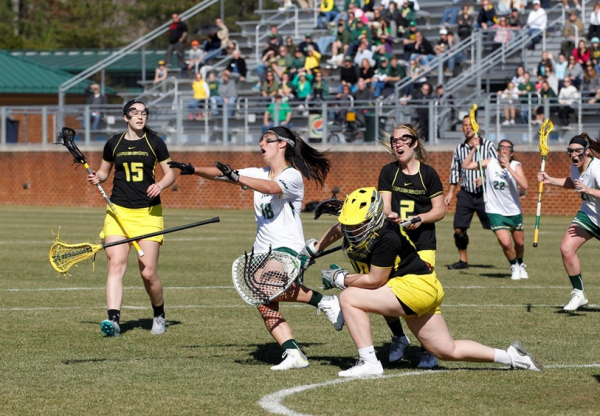 The home opener against Oregon was only the third game of the season, but William and Mary arguably landed its most important victory in years. Four years, to be precise, as the Tribe has suffered through a miniature dark age with a combined record of 18-47 over the past four seasons, never holding a winning record past the first game of the season (and even that only happened once).

Yet the College (2-1) is hoping for a renaissance, as the thrilling 15-14 victory over the visiting Oregon Ducks (2-1) Feb. 28 at Martin Family Stadium pushes the Tribe to its first winning record past week one for the first time since the 2011 season.

Sophomore midfielder McKinley Wade opened up the scoring with a free position opportunity just 88 seconds into the action. The 1-0 lead for the Tribe was short-lived, as the Ducks stitched together a 3-0 run over the next four minutes to gain the upper hand. Freshman attack Eloise Gagnon, already a major part of the College’s offense in her rookie season, earned the Tribe’s second goal at 21:05. Gagnon is the No. 3 scorer on the team with five goals. Junior midfielder Shannon Quinn found the equalizer at 19:39, knotting the score at 3-all for the first of seven ties.

Oregon worked back ahead with a goal at 15:29 and another at 13:46. Sophomore midfielder Emma MacLeod fired into the net at 13:00, with Wade following up with the tying shot at 7:23 after a five-minute period of stiff defense on both sides. A Duck yellow card provided the Tribe with a man-up opportunity, which they cashed in for its first lead with a goal by sophomore attack Abby Corkum at 6:41. The 3-0 run came to end at 5:24, as the Duck tied the score at 6-6.

In the final minutes of the first half, William and Mary outshot Oregon 4-1, but entered the locker room in a 7-7 tie after Quinn briefly put the College ahead. A defensive penalty however, allowed Oregon a free position shot, which it capitalized into the tying goal, putting the score at 7-7 for the first frame.

The first half proved to be a physical contest, as the two teams combined for 41 penalties in just 30 minutes of play, though the split was as equal as it could be (Oregon had 21 to the Tribe’s 20.) In terms of possession, the College held a slight 8-7 advantage in draw controls. Every major statistic was virtually identical, except a minor advantage in saves for the Ducks and the Tribe’s marginal lead on groundballs.

The second half reflected the same competitive intensity of the first. The College notched the first goal of the back frame before adding to the lead with goals from Quinn and sophomore attack Meghan Brophy respectively. Just one minute after Brophy’s goal, Oregon answered back at 25:36.

Reluctant to give up the two-goal lead, the Tribe reestablished the advantage at 24:53 with Gagnon’s second goal, bringing the score to 10-8. Senior attack Michele Goss added another just 80 seconds later, pushing the lead to 11-8.

After having lost the prior two contests to the College in 2010 and 2011, the Ducks fought back to regain control of the game. A 4-0 run over the next eight minutes put Oregon back in the game, ahead by a point with 18 minutes of play remaining.

A penalty by Goss put the Tribe man-down trailing 12-11, but despite the disadvantage, Corkum maneuvered around her defenders to fire in the equalizer at 12:49. Oregon added a 2-0 run over the next eight minutes of play for a 14-12 lead, but the Tribe closed out the final four minutes on a 3-0 run to seal the game. After playing down a man and scoring, Corkum capitalized on a man-up situation for the first goal at 3:42.

Following Corkum’s lead, Quinn completed a hat trick of her own with the tying score at 1:29. Senior attack Zoe Boger earned the game winner with just 38 seconds left to play, and the Tribe triumphed 15-14 on the visiting Ducks. Though the Tribe’s draw control advantage of 17-14 was far from overwhelming, the College earned the possessions that counted, including the final three draw controls.

Up next for the Tribe is a mid-week road trip to Charlottesville, Va., to face instate rival and No. 7 Virginia at 7 p.m Wednesday.