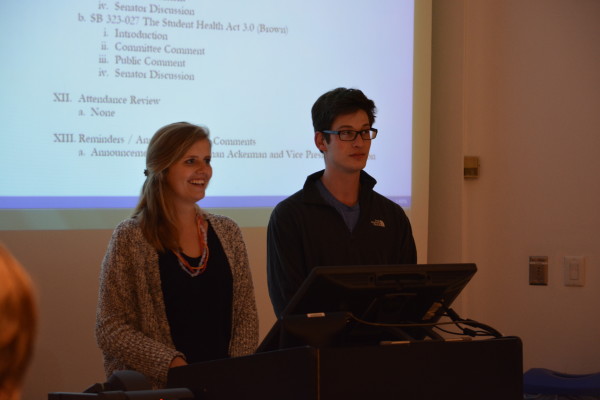 Additionally, this bill will continue to subsidize chlamydia, gonorrhea, HIV and syphilis tests, so that each will cost less than $20 for students.

This bill also charges senators with the responsibility of determining whether there are more tests that the SA could subsidize. For example, SA does not subsidize tests for pubic lice or trichomoniasis. Additionally, it tasks the SA with organizing an information session to deliver information about the new testing.

“We want to accompany this with a workshop session to inform students on what tests they are offering,” Sen. Quetzabel Benavides ’16 said. “This also gives us a chance to talk with students about what other tests or services they would like us to provide.”

During Tuesday night’s meeting Brown also presented current figures on STI tests for the year. Out of allocated funds, $4,717 remains. Since August, students have purchased a total of 567 subsidized tests. The most frequently used test is the gonorrhea test.

Discussion also emerged over whether or not the administration would eventually help SA subsidize the tests. According to Brown, the plan for the next four years is that eventually, through a combination of SA and administrative funding, the tests will be completely free for students. Additionally, she mentioned that they are working to further incorporate the Health Center’s business manager in their future plans.

Class of 2019 President Jonah Yesowitz ’19 and Sen. Danny O’Dea ’16 highlighted concerns about STI testing that might prevent some students from using it. Yesowitz mentioned that many students do not know that the tests are subsidized because the website does not provide updated information. O’Dea also highlighted that some students may not know that they can access these tests confidentially. O’Dea mentioned that some students may be concerned that the tests would show up under their charges on Banner and therefore be visible to their parents.

Brown said that the planned information session is to answer questions like this and to provide students with information and answer their questions. Sen. Olivia Camper ’17 said she believed this would help spread the word.

“I don’t think people know the opportunities they have to go to the Health Center,” Camper said. “A lot of my friends opt to go to outside doctors because they think they will be better quality, but from what I’ve heard the physicians at the Health Center have been wonderful in helping with STIs. I think this will really help change that.”