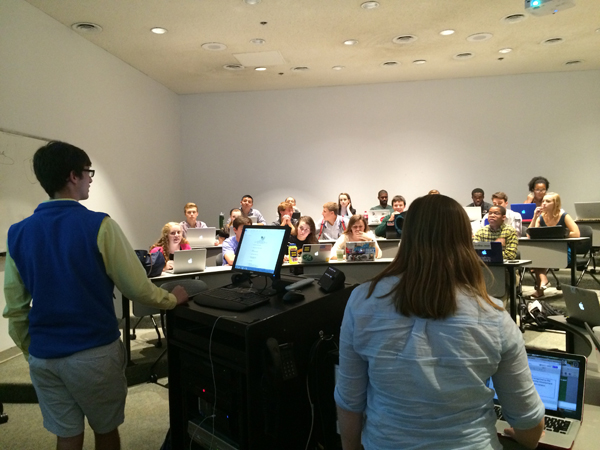 The College of William and Mary’s Student Assembly Senate began its shortest meeting of the semester with a moment of silence in honor of Veterans Day. Senators went on to pass the Dairy Vehicular Act.

The bill, introduced by Sen. Chase Jordan ’15, allocates $2,000 from the Student Activities Reserve for the SA to work with the Admissions Office to provide “sweet frozen dairy” to students on Day for Admitted Students.

According to the bill, the $2,000 will go toward costs associated with bringing the ice cream truck to the College.

“I think this is a really great bill,” Whitaker said. “It’s allowing students to fellowship with incoming students and people who are thinking about the College.”

Chairman of the Senate Daniel Ackerman ’16 clarified in his opening announcements that senators are not allowed to support bills. Members of the Executive Board and class presidents can still support bills.

Sen. Emily Thomas ’17 announced that at least two senators are going be called to the floor during the next meeting due to absences. Three absences will land a senator in front of the entire senate so the student can explain these absences.

Four bills were brought up under new business during the meeting: The Baggage Claim Act, the Dance for Kids Act, the Student Health Act 2.0 and the Signage Act.

The Baggage Claim Act, sponsored by Sen. Danny O’Dea ’18, provides for the transportation of baggage to the train station over Thanksgiving break for students living on campus without any other means of transportation.

$800 would allocated from the Student Activities Reserve for this bill.

The Dance for Kids Act, sponsored by Sen. James Shaw ’18 and Sen. Alaina Shreeves ’18, supports the Children’s Miracle Network by allocating $3,945 for a charity dance marathon.

Ackerman assigned the bill to the student life, finance and public affairs committees.

The Signage Act, sponsored by Brown and Whitaker, creates a sign to put in the Student Health Center to advertise the services the Student Assembly helps to subsidize.