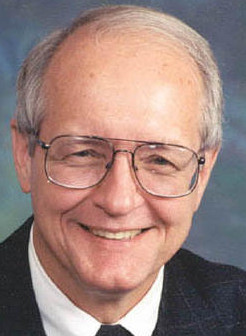 When economics professor Clyde Haulman first arrived in Williamsburg in the fall of 1969, cars still meandered through Merchant Square and the Marshall-Wythe Law School was housed in the building now known as St. George Tucker Hall.

47 years and six College of William and Mary presidents later, Haulman still teaches, but now he has a couple more positions to add to his resume: 16 years on Williamsburg’s City Council, including six as mayor. After three terms in office, Haulman will not seek reelection when his term expires this year on June 30, creating one of two vacant seats for the upcoming May 3 City Council election.

Despite his many years of public service, Haulman said he has never regarded himself as a politician. Only after serving as finance chair for a friend’s City Council campaign in the early 1990s did he first consider local office, serving as a member of the Williamsburg Social Services Advisory Board 1996-98 and on the Williamsburg-James City County School Board 1999-2000. Only when two long-serving City Council members chose not to run for reelection in 2000 did Haulman consider putting his name on the ballot.

“I thought I had some of the skills and interests to bring to it, so I ran for City Council,” Haulman said. “I never thought I would, I never saw myself as a politician and I probably am not a very good one. I don’t see myself that way — I see myself as someone who is interested in solving problems and making things happen for the community.”

Successful in the election, Haulman has remained in the City Council ever since, appointed by his fellow City Council members as vice-mayor in 2004 and then as mayor in 2010.

The City of Williamsburg operates under a city manager form of government in which the appointed city manager operates like a chief executive officer and implements municipal policy. A common structure in smaller towns, the City Council operates as a legislative structure, establishing policy and developing a vision for the community.

“Williamsburg City Council is really a policy board, and I’ve always been sort of a public policy wonk person, so that made sense,” Haulman said. “And city council isn’t a full time job, you can make it a full time job if you want, but it’s not. My interest in public policy and my interest in economics really came together in a nice way with the issues that the city was facing.”

Born in Maryland, Haulman moved with his family when he was young to Panama City, Florida, where his father worked in the Navy as an engineer specializing in anti-submarine warfare. When entering Florida State University in 1961, Haulman also had aspirations in engineering, but after a couple of years realized the subject was not for him. Eventually, he discovered a passion for economics.

Haulman was hired at the College as a professor immediately after completing his doctorate in economics at Florida State and has remained in Williamsburg ever since. Haulman said that the teaching experience he has now is more intimate than what he received as a student at Florida State, which is more than four times the size of the College.

“I guess I got turned off by the big state university approach to education and I thought I’d like to see what a smaller liberal arts college was like, and I think it was a good choice,” Haulman said.

After teaching economics for several years, Haulman was recruited for administrative roles, serving first as the Dean of Undergraduate Studies, where he chaired the general education curriculum review completed in 1993 and later as the Assistant to the President of President Timothy Sullivan.

Although Haulman said he was offered Provost-level positions and jobs at other institutions, he ultimately turned them down because none of the offers were sufficient to pull him away from the College.

Haulman said it was during those moments, when he took the time to step back and really consider positions elsewhere, that he realized the College and Williamsburg were the right places for him.

During his time as an administrator at the College, Haulman was recruited as acting chair of the department of music while the department underwent a search for new faculty.

“I just think being human requires exposure to and appreciation of the arts and I think it’s just part of what everybody should be involved with and engaged with,” Haulman said.

But as Chair of the Music Department, Haulman said one of the biggest things he learned was how different economists and musicians can be.

Even though being a public official was never in his grand scheme, Haulman said he has been focused on providing quality services for the present and ensuring fiscal viability for the future.

“I’d like to think I’m leaving the city stronger in a whole variety of ways then when I started on council, but that’s not just me — I’m one of five on [the] council — it’s really the staff who work for the city and the city council who have great relationships and are able to make that kind of progress,” Haulman said.

Throughout his time in Williamsburg and on City Council, Haulman said he has been focused on building and maintaining strong relationships between the city, Colonial Williamsburg, surrounding counties and the College.

Within Williamsburg, Haulman noted that striking a balance between the tourism and local economy is an ongoing priority: The city should be both an attractive location for visitors on vacation and young professionals seeking long-term residence.

Going forward, Haulman mentioned a complex issue for Williamsburg and other small communities in the shared economy — being able to accommodate new industries and technologies without generating public safety, health, and other issues that have led to regulations in the past.

Haulman said he is proud of the hard work the city has put into improving town-gown relations, crediting frequent meetings with the College administration and the Student Assembly. He noted that continual work is needed to reinforce the working relationship: It is better to deal with potential issues now rather than trying to fix them later, he said.

Although Williamsburg will confront challenges, one problem the city does not have to worry about is partisanship.

“Ultimately, local government, you’ve got to balance the budget every year, you’ve got to provide the services, you have to pick up the trash; when somebody turns on the faucet, the water has to come out clean,” Haulman said. “So in lots of ways, those are not partisan issues. If you keep your eye on what we’re trying to do here, and think about the community as broadly and inclusively as possible, then I think it’s pretty easy not to be partisan.”

As for the College, Haulman said he has enjoyed seeing it transform in both size and quality over his tenure.

“I think over the time I’ve been here it’s become really a top-notch institution and that’s the result of great faculty, good leadership from the administration, and terrific students,” Haulman said.

Going forward, Haulman will continue as a professor at the College and will be teaching a class on the history of economics in the fall. As a retired mayor, Haulman is also looking forward to spending more time with his wife, who recently retired from the Omohundro Institute of Early American History and Culture, and enjoying life in Williamsburg.