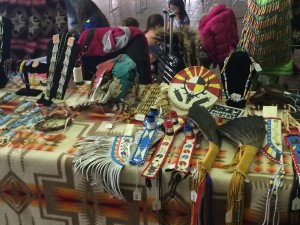 A diverse community from campus and beyond gathered for an afternoon of dancing, singing and culture at the second annual College of William and Mary Powwow, hosted by the American Indian Student Association.

The powwow ran from noon until 5:00 p.m. in Trinkle Hall. The event was open to the public, and students from the College were granted free admission.

The event incorporated several tributes to American veterans, including a “Veteran’s Dance,” in which master of ceremonies and Chickahominy tribe member Clark Stewart invited veterans to join the dancing circle and be honored for their service. Native Americans have served the U.S. military in greater numbers per capita than any other ethnic group in the nation.

American Indian Student Association co-president Vanessa Adkins ’19 said she publicized the event through social media, inviting everyone she knew from the Native American community. The crown Adkins wore to the powwow declared her “Miss Chickahominy,” a title she said she earned by winning an essay contest. She represented the Chickahominy Tribe, as well as the American Indian Students Association, in the opening ceremonies.

“A lot of times people have a stereotypical view of Native Americans,” Adkins said. “So it’s good to have an authentic view.”

The event began with some remarks from the Chickahominy Tribe’s chief Stephen Adkins, who mentioned the College’s controversial history with local Native Americans. He spoke about the Indian School at Brafferton Hall and argued that the College has fallen short of its promises to recruit Native Americans.

“I would challenge you, President Reveley, to again, redouble your efforts, to reach out to the Native students of Virginia,” Chief Adkins said.

I would challenge you, President Reveley, to again, redouble your efforts, to reach out to the Native students of Virginia,” Chief Adkins said.

College President Taylor Reveley later made a speech in which he discussed the importance of celebrating Native American traditions. He also mentioned the Brafferton School, but it was unclear whether he had arrived in time to hear Chief Adkins’ speech or whether he was responding to it.

“William and Mary and the Native Americans go way back,” Reveley said. “The third oldest academic building in the United States used to be a school for young men in neighboring tribes … I think we’ve come a long way in recent years in renewing those ties, and this great powwow is another indication of it.”

Aaron Staples ’17, who said he did not think Reveley had arrived to hear Chief Adkins’ speech, said that not enough has been done to correct past injustices.

“There were a lot terrible things that came out of those Indian schools, and the institutions themselves were just a very destructive and violent colonial force,” Staples said. “That is something that hasn’t been addressed by the school yet, and I think one of the things having a powwow was trying to promote was reconciliation by the college, and in my opinion, Reveley’s little blurb … was kind of shooting that dead in the water.”

Vanessa Adkins said in an email that she agrees with her cousin Chief Adkins that more should be done to recruit Native Americans to the College, both for the sake of her organization and for overall student diversity.

“The Brafferton is definitely a time in W&M’s history that needs to be talked about, as it was essentially a boarding school designed to assimilate natives into English/colonial culture (aka destroy/get rid of Native culture),” she said in an email. “I personally feel like talking about the Brafferton makes people uncomfortable, but that makes it that much more important to talk about. It will be interesting to see if President Reveley does try to reach out more to Native students, and AISA would be more than happy to work with him if/when he does.”

Amber Bryant ’16, who said she identifies as one-eighth Pamunkey, said she was glad to get in touch with her heritage in an available setting.

“I think the drum circles were just amazing. The first time [Turtle Clan] started singing I had goosebumps everywhere,” Bryant said. “There’s such a great communal aspect to that kind of music, and I can only imagine how wonderful it is to be a part of that.”

I think the drum circles were just amazing. The first time [Turtle Clan] started singing I had goosebumps everywhere. There’s such a great communal aspect to that kind of music, and I can only imagine how wonderful it is to be a part of that,” Bryant said.

Bryant also said that the College must recognize the darker aspects of its history.

“The school is trying to whitewash their history a little bit, and I think that’s a general consensus as far as Native American issues are concerned,” Bryant said. “So it’s like, ‘Yeah there was genocide and we kidnapped a bunch of your boys, but it’s all fine now. There has to be acknowledgment and a push towards greater education and inclusivity.”

3/23/2016 10:05 p.m. An earlier version of this article incorrectly referred to AISA co-president Vanessa Adkins ’19 as “Queen Chickahominy.” Her correct title is Miss Chickahominy.