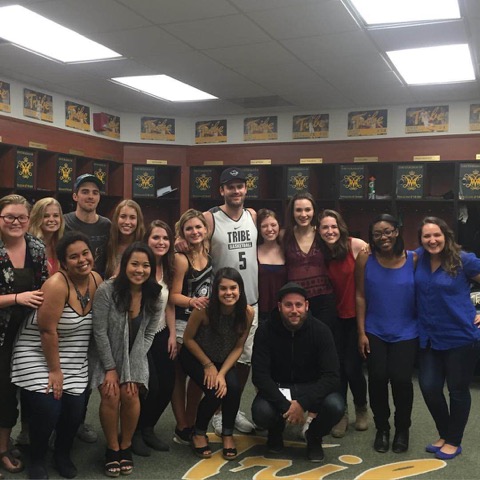 On Thursday night, Kaplan Arena came to life during the spring concert, featuring the Chainsmokers. The DJ duo, Andrew Taggart and Alex Pall, filled Kaplan with smoke, lights, colorful images and EDM loud enough to reach students in the last rows of the arena. Their onstage energy persisted backstage as several students participated in more than just a typical meet-and-greet.

The College of William and Mary’s a capella group, Reveille, sang a mashup of “Roses” and “What Do Ü Mean” for the Chainsmokers backstage after the concert. They had originally intended to debut the arrangement on April 20 at their Wren Ten concert.

“It was such a pleasant surprise to be able to debut it with the Chainsmokers as our audience,” Fallon Bridgeland ’16, president of Reveille, said in an email. “After listening to ‘Roses’ on repeat for months in order to make our arrangement, it was surreal to be singing it for the creators of the original song.”

Reveille’s Public Relations Chair, Natalie Ward ’17, emailed a contact listed on the Chainsmokers’ website about their arrangement of “Roses.” In the days leading up to the concert, she communicated with their manager about potentially performing the arrangement for the duo. However, Reveille didn’t know they would be performing until about halfway through the concert. According to Bridgeland, the group was nervous at first because they had just learned the song.

“As soon as we walked into the room, however, our nerves turned to excitement because Alex and Drew acted incredibly welcoming and genuinely pumped to meet us,” Bridgeland said in an email. “They treated us like friends and it made us so much more comfortable. Drew mentioned that he used to always wonder whether people would sing his music!”

Alex Pall also showed some Tribe pride by sporting the basketball practice jersey of sophomore guard Greg Malinowski ’18. The jersey was left in the locker room that served as a dressing room for the Chainsmokers. Malinowski and other members of AMP were able to meet Pall and Taggart after the concert.