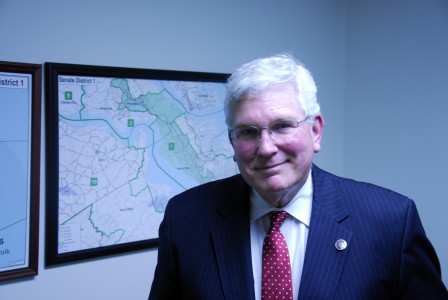 During the 2015 Virginia General Assembly Session, Sen. John Miller (D-1) was confronted with an issue he did not know much about: campus sexual assault policy. Wanting information and advice, he turned not to politicians or lobbyists, but to someone close to the community at stake — his intern Hannah McKiernan ’17.

For McKiernan, Miller’s attentiveness to someone who would not normally get a say in legislation was powerful, representing his commitment to students, education and his constituents. McKiernan said that moment is among her favorite memories of Miller, who died unexpectedly last Monday, April 4.

Journalist and news anchor at WVEC-TV,  administrator at Christopher Newport University, Little League umpire and Virginia state senator, Miller had a meaningful presence in the community and an impact on the people in it, according to people who knew him.

Although only representing the College after a 2011 redistricting, Miller immediately sought to get involved and learn about campus. A frequent guest at the College’s Young Democrats and Virginia 21 meetings, Miller met with students, took them out for pizza chow-downs and worked with them in his office.

In 2013, when the Virginia General Assembly was considering a voter ID bill, a few students in Virginia 21 realized the bill did not include student IDs as an acceptable form of identification. After the students contacted Miller and explained their issue with the bill, Miller went to the bill’s sponsor, Sen. Steve Newman (R-23).

Jakob Stalnaker ’16, who knew Miller through Young Democrats, said he saw this action as an important example of Miller’s dedication and receptiveness to students.

“They basically drafted a compromise which allowed students to use their student IDs on campus here,” Stalnaker said. “[Miller] was relentless in fighting for his constituents and higher education. As a higher education administrator, he was constantly fighting to represent the student body here and the Williamsburg community in Richmond.”

Stalnaker continued that he viewed Miller as a constant advocate of students of the College and a “fixture of the community.”

Delegate Monty Mason (D-93) ’89 also saw Miller’s dedication to the College’s student body. As a public official also representing the College and Williamsburg and an alumnus himself, Mason observed the close interactions between Miller and students.

“John loved the William and Mary students, whether it was the Young Dems club, Virginia 21, you could just see him light up when he interacted with students,” Mason said.

John loved the William and Mary students, whether it was the Young Dems club, Virginia 21, you could just see him light up when he interacted with students,” Mason said.

Not only a mentor to students, Miller supported Mason’s 2013 and 2015 campaigns for the Virginia House of Delegates.

According to Mason, Miller’s expertise, guidance and friendship were invaluable assets to have during the start of his political career.

“John was invaluable,” Mason said. “In these jobs everybody tends to tell you what you need to do, whether — you’ve got to do this, or you’ve got to pay attention and do it this way — but John never once told me what I needed to do. He was always there for me to hash issues out, to walk through the way of the land to discuss the big topics of the day and we tended to have very similar interests and issues that we both paid attention to — education, particularly early childhood education, just one of many examples.”

Much more than a political ally, Mason said that Miller was a personal friend.

First winning a seat in the Virginia Senate in 2007, Miller supported bipartisan action on redistricting, electing judges and environmental efforts, founding the Commonwealth Caucus with three other freshman Senators — two Republicans and one other Democrat.

Winning reelection in 2011 and 2015, Miller most recently served on three committees: Agriculture; Conservation and Natural Resources; Local Government; and Privileges and Elections.

Dylan Campbell ’17, an intern for Miller during the recent 2016 General Assembly session, said Miller even responded to the “ridiculous” people who proved difficult to reason with.

“I mostly did checking his emails and stuff for him, but honestly there’s not much you can do when you’re in his office, because he responds to every email and every letter,” Campbell said.

Although his committee assignments, district and the composition of the Virginia Senate changed over time, one element of his work always followed him: his passion for public education.

His supporters said that Miller was a constant advocate for Virginia’s children in government.

McKiernan, this made Miller a mentor and an inspiration to her.

“He was a quiet leader who was in it for all the right reasons and deeply, deeply cared about K-12 education,” McKiernan said. “It’s what I’m most passionate about, which is why I latched on to him and really admired him as a human being, because he devoted his entire political career to education.”

Government professor John McGlennon, who knew Miller for over 30 years, emphasized Miller’s thoughtfulness, both in the Senate and in the community.

McGlennon, who has a stack of handwritten notes from Miller, which he collected over the years, said Miller would always follow-up after a meeting or congratulate someone on an accomplishment.

“When you put together all of the attributes he had, he was a smart guy, he cared a lot about the issues, and he was able to articulate his plans for dealing with those issues. That’s a powerful combination and it’s really going to be missed in the Senate,” McGlennon said.

When you put together all of the attributes he had, he was a smart guy, he cared a lot about the issues, and he was able to articulate his plans for dealing with those issues. That’s a powerful combination and it’s really going to be missed in the Senate,” McGlennon said.

The College’s Student Assembly passed a resolution April 5 honoring Miller. During his funeral Saturday, members of the SA presented the family with the resolution, remembering a faithful public official and a man of character.