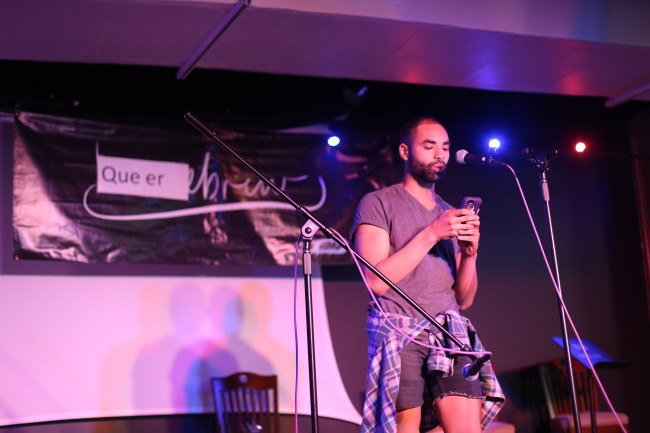 Building on a campus-wide conversation about diversity that has surfaced throughout the year, the Student Assembly Department of Diversity is hosting their annual I AM W&M Week, which started Saturday, April 9.

The week’s events include QueerBrew, King and Queen’s Ball, SIA’s annual Rock ‘n’ Roll Stroll Competition and a performance by comedian Kristina Wong, among others. Student organizations such as AMP, Humans of William and Mary and Sigma Iota Alpha sorority are helping co-host these events.

According to SA Secretary of Diversity Initiatives Meronne Teklu ’17, this week is important because it celebrates different cultural ideas and perspectives.

“To start, a definition of the week is that it is a celebration of different cultural ideas, personalities and perspectives coming together to define what the William and Mary community is, which is hard because it is such a diverse community,” Teklu said. “This week is trying to host events that expose students to different viewpoints and opinions and just to celebrate diversity and to celebrate William and Mary and how far we’ve come and how far we have to go. It is most important because it recognizes what we have and what we still need.”

To start, a definition of the week is that it is a celebration of different cultural ideas, personalities and perspectives coming together to define what the William and Mary community is, which is hard because it is such a diverse community,” Teklu said.

In the past, the SA sponsored the week’s events independently. Teklu said that last year’s I AM W&M Week was hindered by the lack of collaboration, which limited how many people came to events and the number of issues students could be exposed to as part of the week’s programming.

Although much of the logistics and planning of I AM W&M Week was done by SA’s executive branch, recently-inaugurated SA President Eboni Brown ’17 sponsored a bill in her previous role as a senator for the class of 2017 to help allocate funds for the week’s events. The I AM WM Week Act Part II, allocated $2,520 from SA reserves for materials needed for the week.

“This week is so very important to the College because it offers students a space to celebrate and embrace the many forms of diversity here and in this celebration, students from all different backgrounds can embrace who they are and their importance to make the College of William and Mary great,” Brown said in an email. “This is something that is near and dear to my heart due to the many experiences I have had as a student of color here on campus. I got involved with the funding aspect of this event because I understood its importance to campus. It is vital that the SA continue to lead this program. As the leaders of the student body, we must make sure our activities are representative of our campus and our week does just that.”

QueerBrew, one of the week’s events, occurred April 11. Hosted by SA and AMP, the event aimed to showcase the musical talent and poetry of the LGBTQ community at the College of William and Mary.

George Valdes-Dapena ’19 along with Ellie Grace ’19, performed “Luv, Luv, Luv” by Pansy Division, “The Moon Song,” by Karen O and “Transgender Dysphoria Blues” by Against Me!.

According to Valdes-Dapena, events like QueerBrew are important because they give students insight into issues related to sexual and gender diversity.

“[This event is] important for people to be exposed to gender and sexual diversity because a lot of people these days think [queer people are] a total joke because it’s so different from how they were raised,” Valdes-Dapena said in an email. “I just want people to know that we’re real, whole people, and we’re not just acting out for attention. Although to be fair, I love attention.”

[This event is] important for people to be exposed to gender and sexual diversity because a lot of people these days think [queer people are] a total joke because it’s so different from how they were raised,” Valdes-Dapena said in an email.

Other events throughout the week focus on different forms of diversity, such as racial diversity, ethnic and cultural diversity, and neurodiversity.

Some events, like Chalk the Crim Dell, are for students to identify what about them makes them part of the College.

According to Teklu, this week stems from the larger campus dialogue on diversity, as it aims to address the different issues smaller groups tackle throughout the year.

“I think that there is obviously not one specific definition of diversity — everyone has different interpretations,” Teklu said. “In terms of what the College is talking about right now, there’s talk about the current racial climate. In terms of policies, we just recently launched flexible housing. There’s a lot of talk on sexuality, gender and race. We also want to talk more about mental health and neurodiversity. In the context of this greater diversity conversation, we are in a very important time. It is important for SA to recognize this and be advocates for students. It is important to establish that we are here for students, for the community, and show that we want to do everything we can to empower students.”

Moving forward, Teklu said she hopes SA will increase marketing next year so that more students are aware of the week’s events.

Teklu also said she believes it is important to acknowledge that I AM W&M Week does not attempt to put diversity in one week and that SA aims to address diversity throughout the year.

“A lot of students don’t know what the Student Assembly is or what the departments are,” Teklu said. “The department of diversity has table talks that we host every semester, different panels discussing the LGBT climate on campus and we host financial seminars. We put on a lot of events throughout the year, we need to advertise how we can help them. My advice for next year would be to hone in on who we are as Student Assembly and how we can help.”