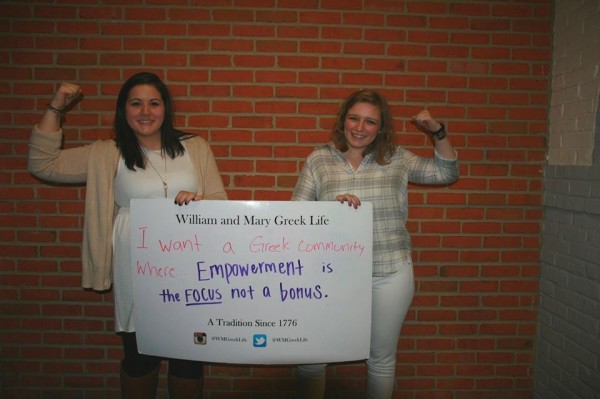 College of William and Mary students began an initiative to expand diversity and inclusivity in Greek life this Valentine’s Day.  Greeks for Respect, Inclusion and Diversity held its first event, a facilitated conversation that culminated in a whiteboard campaign held at the Sadler Center.

The student-led initiative grew out of a four-week series of facilitated conversations hosted by the Center for Student Diversity and the Office of Student Leadership Development. The initiative includes representatives from the Inner Fraternity Council, the Pan-Hellenic Council and the National Pan-Hellenic Council, as well as members of Sigma Iota Alpha, the College’s first and only Latina sorority.

“The idea for GRID came out of the problems we have seen,” Cook said. “I think this is an effort run by students to say, ‘We don’t want our Greek community to be represented like that. We want to hold ourselves accountable to a higher standard.’”

“The idea for GRID came out of the problems we have seen,” Cook said. “I think this is an effort run by students to say, ‘We don’t want our Greek community to be represented like that. We want to hold ourselves accountable to a higher standard.’”

Katrina McTigue ’17, a member of Pi Beta Phi, said that recent mixer themes that perpetuate stereotypes, particularly with regard to race and gender, have alarmed administrators and members of Greek organizations.

Cook said that traditions that enforce rigid social identities are problematic. Among these traditions, Winkowski cited the tradition of fraternities courting sororities for formals or homecoming.

“It is hard to show people the value of seeing things from a different lens when you have been around people like you for all your four years of college,” Winkowski said.

One of the ways GRID hopes to accomplish its goals is by facilitating dialogues like the one hosted Feb. 14.  Winkowski said that dialogues consist of a moderator providing a framework for what diversity is, and then asking participants to discuss how diverse they think their organization is.  He said the initiative is hoping to have these dialogues with individual organizations and also with groups of organizations.

According to Winkowski, dialogues are effective because members of an organization know more about inclusion in their organization and can come up with better ways to make it more inclusive than those from outside the organization can.

Both McTigue and Winkowski cited barriers to creating an inclusive Greek life.  Winkowski mentioned cost as a barrier to socioeconomic inclusion, while

“It is hard to show people the value of seeing things from a different lens when you have been around people like you for all your four years of college,” Winkowski said.

McTigue said that people often tell her that Greek life at the College differs from other universities’ Greek life because it is more inclusive.  Winkowski said that he believes that College students want to be more inclusive, even if they do not yet have the words to articulate that message.

Editor’s Note (2/25/16 at 5:46 p.m.): An earlier version of this article incorrectly stated that Winkowski is a member of Kappa Sigma Epsilon, not Sigma Phi Epsilon. Additionally, Winkowski never commented about the College being above other universities in terms of wanting to be more inclusive, and the article has been changed to reflect that.