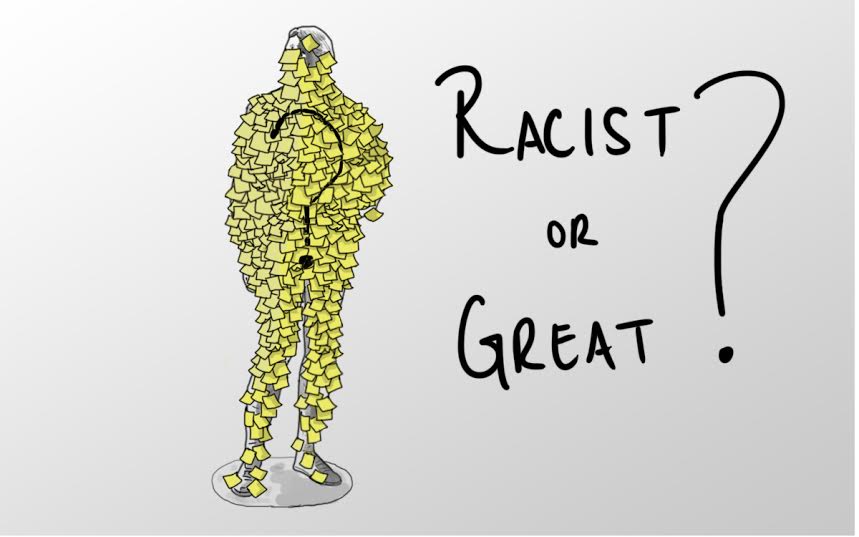 The College of William and Mary’s most esteemed alumnus, Thomas Jefferson, would have turned 273 this week. If he witnessed the state of the nation today, he would have also turned over in his grave.

Institutions across the country — from the Democratic Party to a host of elite universities — are removing founding fathers like Jefferson from our collective memory, all for the sake of values like “diversity, inclusivity, and equality.” The College is not exempt from this growing national trend. Last November, students anonymously adorned Jefferson’s statue with inflammatory sticky notes that featured messages like “racist rapist,” “incestuous pedophile” and, “He knew it was wrong.” Although the intent of their protest was never stated, one message demanded, “Stop glorifying racists,” and their actions ignited a campus-wide debate over Jefferson’s legacy.

One month later, I responded (anonymously, at the time) by posting contradictory messages of my own on the statue, which included messages like “deserves to be on this campus” and, “W&M doesn’t glorify racism.” In light of Jefferson’s birthday, I thought I’d share why I felt compelled to fight back against this particular bout of student activism.

This is not to excuse Jefferson for his wrongdoings, but to emphasize that he was much more complex than a “white supremacist slaveholder.”

The original messages painted an unfair picture of Thomas Jefferson’s life, and erroneously suggested that the unsavory parts of his past rendered him undeserving of commemoration. Yes, Jefferson was a slaveholder. He has received well-deserved criticism for it throughout the past two centuries, ever since his own time. But Jefferson also consistently expressed a moral aversion to the institution, drafted the Northwest Ordinance banning slavery in northern territories, and worked to end the slave trade, which he deemed a “human rights violation.” It was he who wrote that all men are created equal and endowed with inalienable rights — concepts central to the contemporary ideals of equality and diversity that evidently inspire his modern-day detractors.

This is not to excuse Jefferson for his wrongdoings, but to emphasize that he was much more complex than a “white supremacist slaveholder.” If we only celebrated historical figures whose every action and belief conformed to today’s prevailing socio-political standards, there’d be no statues or memorials anywhere in the world.

More troubling to me than the gross misrepresentation of history, however, was both the idea that the mere existence of his statue signifies the “glorification” of racism by the College, as well as the subsequent implication that its presence on campus inherently denigrates minority students.

More troubling to me than the gross misrepresentation of history, however, was both the idea that the mere existence of his statue signifies the “glorification” of racism by the College, as well as the subsequent implication that its presence on campus inherently denigrates minority students. For one, it is patently absurd to contend that a block of marble carved in the likeness of a man long dead, or the names of Confederate generals etched onto a plaque, can itself harbor racism or actively perpetuate discrimination on campus.

Yet groups nationwide who campaign for the removal of historical figures nearly always employ these flimsy charges of prejudice, arguing that because they feel unwelcome, oppressed or discriminated against as a result of these memorials, they are unwelcoming, oppressive and discriminatory. Many in academia refuse to challenge this factual relativism — this idea that there are no objective truths, and that your subjective truth is the truth. Instead, universities today actually encourage it by recognizing (and thus legitimatizing) frivolous claims made by hyper-anxious students who think learning about Western civilization upholds white supremacy or referring to professors as “masters” is violently racist.

If we accept the charge that Jefferson’s statue glorifies prejudice, what would be next?

Acquiescing to this moral and factual relativism leads down a precarious and dangerous path, one that is antithetical to reason and ultimately impedes freedom of thought, speech and expression. If we accept the charge that Jefferson’s statue glorifies prejudice, what would be next? Would we need to tear down the Wren building because Sir Christopher Wren’s architectural style is reminiscent of European colonialism? Will there be certain topics students can no longer discuss?

Political elites in ancient Rome practiced damnatio memoriae, a form of dishonor bestowed onto traitors that entailed the purging of names and images after death. They used it primarily to erase dissidents from social memory, but it also served to intimidate political enemies and suppress future opposition. In the wake of ever-increasing intolerance, we ought to remain diligent in preserving our history, lest we see the College’s illustrious past condemned and erased forevermore.