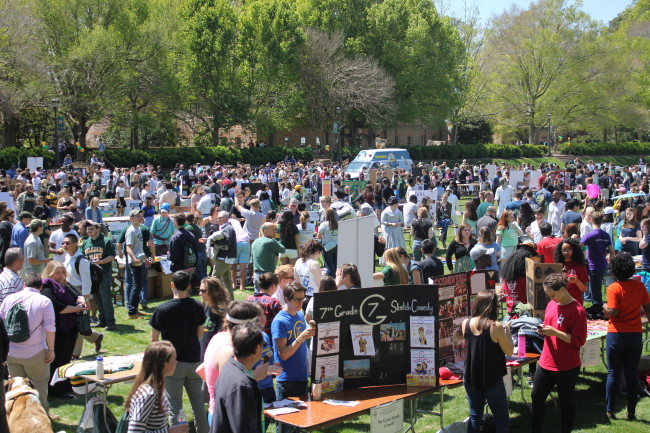 With 14,380 applications for 1,520 spots — 1,500 in the main class and 20 in the St. Andrews-William and Mary Joint Degree Programme, — the College accepted students from all 50 states, as well as Washington D.C., Puerto Rico, Guam and the U.S. Virgin Islands. However, after 11 years of an increasing applicant pool, the number of applications fell by almost 600 students, or 3.8 percent, from the class of 2019’s application pool size.

Associate Provost for Enrollment and Dean of Admissions Tim Wolfe ’95 M.Ed. ’01 said that he sees the newly admitted class as a good fit for the College, citing that they are already bonding as a community, especially on social media.

“Here are students who are still in high school, still in that stage of their lives, but they’re already coming together as the William and Mary Class of 2020,” Wolfe said. “That’s a very exciting thing to see.”

Admitted student Todd Kirks, who was walking by the Sunken Garden on Day for Admitted Students Saturday April 16, said he appreciated that sense of community as well.

“[My favorite thing] is probably how friendly everyone is, how open everyone is towards each other, how everyone’s smiling,” Kirks said. “I haven’t seen a frowning face.”

[My favorite thing] is probably how friendly everyone is, how open everyone is towards each other, how everyone’s smiling,” Kirks said.

Although he has not made a decision where he will attend next year yet, Kirks said the odds of choosing the College increased greatly from his experience on campus.

Speaking about the decrease in the size of the applicant pool, Wolfe said it was a product of two things: the drop in Virginia high school graduates and the College’s ability to provide aid for out-of-state students.

According to the Virginia Department of Education, the number of public high school graduates in the 2014-2015 school year was at its lowest point since the 2009-2010 school year after several years of sustained growth.

Because of the relationship between the number of high school diplomas and applications to institutions of higher learning, Wolfe said that the drop in applications was expected and has been seen across universities in Virginia.

Wolfe attributed a large part of this to the College’s inability to meet 100 percent of demonstrated financial need.

“This is a little bit of a tough scenario, because we’re a public university, but most of the universities that we overlap with are top private universities — almost all of which meet 100 percent of demonstrated need,” Wolfe said.

This is a little bit of a tough scenario, because we’re a public university, but most of the universities that we overlap with are top private universities — almost all of which meet 100 percent of demonstrated need,” Wolfe said.

After the implementation of the William and Mary Promise in fall 2013, there was a recalibration of the aid available to out-of-state students. Wolfe said that because of this, more out-of-state families may not see the College as a financially feasible option.

In fact, according to Director of the Financial Aid Office Ed Irish, for the class of 2019, the difference in the full cost of attendance between in-state and out-of-state students was $22,025, which includes tuition and fees, room and board and other allowances.

To Wolfe, increasing the application volume is not the focus.

“There are things you can do to increase applications, but if those end up being applications from students who never were going to be competitive in the admissions process, or were never going to enroll to begin with, all you’re doing is increasing applications,” Wolfe said.

Instead, Wolfe said that the College should focus on providing aid sufficient for students to choose to attend the College.

Tiffany Ko, an admitted student and Monroe Scholar touring Monroe Hall on Day for Admitted Students said she would most likely attend the College in the fall if her financial aid worked out.

Interested in pursuing psychology and neuroscience and starting a string ensemble, Ko said she considers the College her top choice.

“I love how green it is, just from the physical aspect,” Ko said. “And the buildings are old, but they’re so well maintained that it’s just so beautiful and of course the academics, hard to beat, and there’s just so much life on campus.”