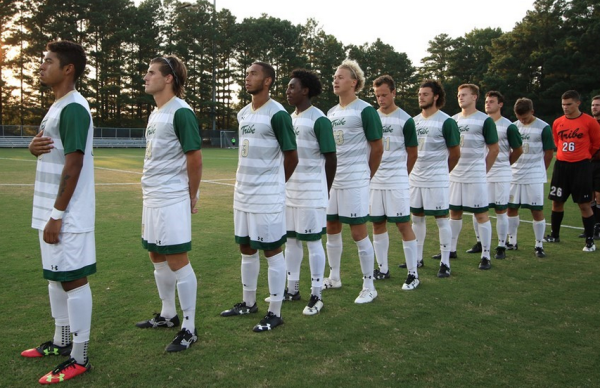 Three years ago, the Tribe suffered back-to-back heartbreak losses to end the season, falling to Drexel 1-0 in the 2013 Colonial Athletic Association Championship game before losing on penalty kicks to George Mason in the NCAA Tournament. This year might be William and Mary’s best chance to take home the CAA title since that season.

In 2013, Jackson Eskay ’16 led the Tribe in goals and points. Fast forward three years to his brother William Eskay, a junior forward, spearheading a returning group of nine starters from last year’s team. The attacking trident of Eskay and sophomore Ryder Bell and sophomore reigning CAA Co-Rookie of the Year Marcel Berry accounted for 56 percent of the Tribe’s goals last season.

The attacking trident of Eskay and sophomore Ryder Bell and sophomore reigning CAA Co-Rookie of the Year Marcel Berry accounted for 56 percent of the Tribe’s goals last season.

The defense is also relatively settled. Last year’s center back pairing of redshirt senior Ryan Perry and sophomore Remi Frost started every game together and return this year. Additionally, experienced senior Reilly Maw makes the shift from forward to right back.

The two positions that look up for grabs are left back and goalkeeper. Redshirt junior Phil Breno, a transfer from Maryland-Baltimore County, was tabbed to start in goal for the Tribe’s season opener against George Washington. However, redshirt senior Mac Phillips played a half against Old Dominion in preseason and is the most experienced of the keepers on the roster. Redshirt sophomores Sam Onyeador and Logan Jones both saw time in net last year, while the Tribe also added a 6’3” freshman goalkeeper, Daniel McBride.

The two positions that look up for grabs are left back and goalkeeper.

The other positional duel, at left back, seems to favor redshirt junior Alfonso Speed Jr. Speed started only four games last year, so senior Jordan Petit and redshirt sophomore Geoffrey Young could figure into the equation as well. Freshman Ricardo Acosta also joins the team as a touted outside back, as does transfer Hristo Bustamante, a redshirt freshman.

Last year, the College disappointed, finishing seventh in-conference and missing out on the CAA tournament. This experienced team will face some tough tests this year, including four teams in the preseason NCAA rankings: No. 8 North Carolina, No. 10 Georgetown, No. 17 Virginia and No. 21 Coastal Carolina. The Tribe is tipped to finish fifth in the CAA by the nine conference head coaches, and will have to battle past 2015 champion Hofstra, as well as other talented teams such as Delaware, Elon and North Carolina-Wilmington.

Although the team opened the season with a 2-1 loss to George Washington, the future looks bright for the Tribe this year. It faces a few early tests in September with Coastal Carolina, North Carolina and Georgetown, and kicks off its CAA schedule on Sept. 17. The season culminates with the CAA tournament on Nov. 5.