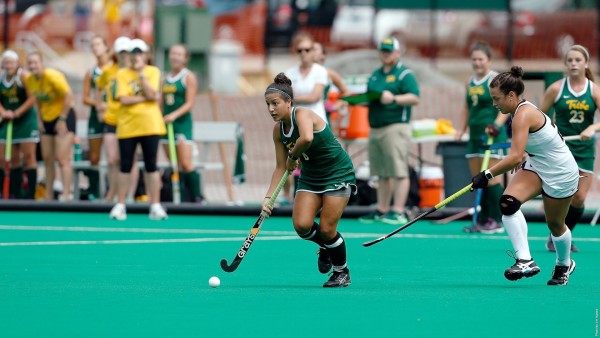 William and Mary dropped a pair of matches over the weekend, falling first at American 3-0 Friday before being defeated by Rutgers 2-1 in the Tribe’s home opener at Busch Field Sunday.

“Any schedule that we put for this team, I like challenges straight off the bat with a strong schedule,” head coach Tess Ellis said. “Going into American, I think they won the Patriot League and have gone to the [NCAA] final 16 for the last five years, and then Rutgers … will always come to the table with a lot of aggression, which is something that we’ve got to prepare for going into conference.”

Friday’s match at Jacobs Field in Washington, D.C. was the first shutout for the College (0-3) this season. Offense wasn’t exactly a struggle as the Tribe went shot-for-shot with American at 11 apiece. However, the College did have a tough time capitalizing on its shots as it was outdone 10-5 in shots on frame. 10 minutes into the first period, the Eagles scored off a loose ball that deflected from a Tribe save by freshman keeper Morgan Connor seconds prior.

The game remained 1-0 until midway through the second period when American successfully converted a penalty corner in the 52nd minute. With three minutes remaining, the Eagles found the back of the net for the third time, putting the game out of reach as the home defense shut down the Tribe’s chances. Both teams had five penalty corners, with American going 1-5 and the Tribe going 0-5 in their attempts. Connor finished with seven saves while Eagles keeper Maura Jacobs finished with five.

We definitely sometimes shoot ourselves in the foot and realize that we can be, when it comes to halftime, like, ‘You guys, there’s nothing this team is doing that we can’t handle and beat,’” Ellis said.

Following the 3-0 shutout was a more competitive match Sunday afternoon in Williamsburg. The Scarlet Knights of Rutgers (2-2) picked up a 2-1 win, dropping the College to a 0-3 start for the season. Just as in the Friday game, the Tribe opponent scored first in the first couple of minutes, this time from a recovery off a penalty corner in the fifth minute. The College’s offense took most of the half to warm up, not registering a shot until the 18th minute of the opening half. The Tribe would end the half outnumbered 11 shots to four.

“We definitely sometimes shoot ourselves in the foot and realize that we can be, when it comes to halftime, like, ‘You guys, there’s nothing this team is doing that we can’t handle and beat,’” Ellis said.

Defensively, Connor was in the cage once again, making the third start of her college career. Filling in for redshirt-sophomore Meredith Clay, who is out with an injury, Connor is still adjusting to the speed and aggression of the college game.

“Morgan’s in a unique situation,” Ellis said. “It’s always going to be that situation of, ‘Welcome to D1 athletics,’ and it doesn’t matter what you do over the summer, nothing can compare to the speed of a D1 game … We’ve definitely seen a huge improve[ment] from first scrimmage through even today.”

Connor and the back line surrendered the eventual game-winning goal in the waning seconds of the first half as the referees called for Rutgers to set up for a penalty corner. Scarlet Knights defender Sofia Walia converted the opportunity to put the Tribe at a 2-0 deficit at the break. Ellis spoke about tweaking her defensive strategies.

The College retook the field with high energy, nearly doubling the total shot count with seven second-half attempts for a total of 11. Rutgers was steadfast with eight shots of its own in the back half, though it was unable to score again. The score looked as if it would end 2-0 when senior forward Maria Jose Pastor sent an unassisted shot that rebounded off a Scarlet Knights save into the net with 31 seconds left. With another goal out of reach, the game ended 2-1 as the Tribe dropped its third of three games. Connor ended with four saves while a pair of Rutgers keepers combined for five. Junior forward Cammie Lloyd led the offense with four shots, three of them on target.

“If you look at our stats, our defense is improving every game, now we just have to finish at the other end,” Ellis said. “I’m hoping within the next week that everything comes together and we’re at the strength we need for our next two games.”

The Tribe heads north to face Georgetown Friday at 1 p.m. before returning to Busch Field to play No. 20 Old Dominion Sunday at 1 p.m.