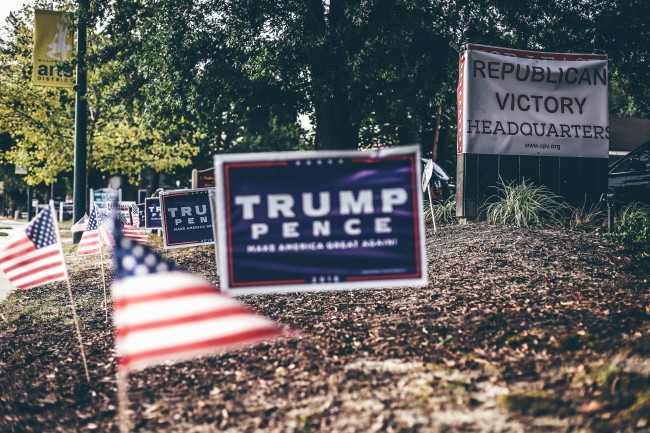 Walking past 901 Richmond Road — just a short distance from the College of William and Mary campus — it is hard to miss the Republican Victory Headquarters. Trump/Pence 2016 signs and American flags crowd the front yard of the the combined Williamsburg and James City County Republican Party office, which celebrated its opening Friday, Sept. 9. Local Republican politicians and supporters were gathered inside, wearing “Make America Great Again” shirts and snacking on cheese and crackers.

The event was organized by James City County Republican Committee Chair Elizabeth Keller and City of Williamsburg Republican Committee Chair Lori Goldstein, both of whom gave brief opening remarks before introducing Heather Cordasco. Cordasco is running to represent the 93rd district in the Virginia House of Delegates — a seat which was recently vacated by Delegate Monty Mason ’89, who resigned in order to run for State Senate.

In an election cycle dominated by Donald Trump, candidates further down the ballot keep a lower profile, but Cordasco made sure to highlight her position as a local candidate who has lived on the peninsula for over 23 years. Addressing the crowd, Cordasco described her ongoing campaign efforts and focused on her need for volunteer support and financial donations.

“We’re rock and roll. We’re ready to go,” Cordasco said. “Anything you want to do to help, I’ll take it.”

In her speech, Cordasco stressed the importance this seat could have for the party — if she wins this election, Republicans would have a two-thirds majority in the House, giving them the power to overturn vetoes.

City of Williamsburg City Council member Benming Zhang ’16 briefly stopped by the event and said he only attended out of curiosity after hearing that his friend and former City Council contender Greg Granger owned the property. While Zhang was a member of the Williamsburg Republican committee before he was elected to City Council, he said that does not interfere with his position.

I will stress that I am non-partisan when conducting city businesses,” Zhang said in a written response.

“I will stress that I am non-partisan when conducting city businesses,” Zhang said in a written response. “You will see me at constituent/city-related events all the time. For example, I volunteer at then-Delegate Mason’s College Creek clean-up every year since he started the program.”

The most divisive issue among attendees was Trump’s candidacy. While some embraced Trump as someone who has reenergized the party, others were not as enthusiastic in their support of the presidential candidate, choosing to focus instead on electing candidates down the ballot.

For Martha Hunsucker, a former French professor at the College, Donald Trump’s lack of concern for political correctness is invigorating; Trump’s campaign is the first in which she’s ever been passionate enough to become involved. According to Hunsucker, the stakes in this election are higher than ever because of the dangers she thinks a Hillary Clinton presidency would pose.

“If Hillary [Clinton] wins, this country is going — there is no more United States of America as we knew it,” Hunsucker said.

Hunsucker said she is not particularly bothered by Donald Trump’s history of perceived racist or sexist comments or by his inconsistencies. To her, the most important quality in a leader is honesty.

“Why would you be consistent if reality changes?” Hunsucker said. “Consistency is bad. You have to be flexible.”

One of the more Trump-skeptical attendees was Virginia delegate to this year’s Republican National Convention and co-president of the Federalist Society at the Marshall-Wythe School of Law Bethany Bostron J.D. ’17 M.P.P ’17. For Bostron, this election cycle is abnormal.

“This year is just weird. It’s weird on both sides; it doesn’t make any sense what’s going on,” Bostron said.  “I’m trying to focus more on state and local [elections], because I feel like we have more control there.”

Bostron said she hopes to see young people become more politically conscious. When she ran for national delegate, her focus was on doing a better job of messaging and trying to target the younger generation. For college students who want to get involved, Bostron advocates connecting with the local branch of the party, which she said is always in need of volunteers.

Tim Burns ’17 is also concerned about Trump’s polarizing political persona, and chose to focus his efforts more locally, as well. Burns, who works for Scott Taylor’s congressional campaign, considers local elections arduous yet critical components of the political process. Local elections, Burns says, are where votes matter the most.

One of Burns’ biggest concerns this election cycle is the polarization of both sides of the political spectrum, especially in an environment like a college campus.

“What’s hardest to deal with is that people can’t hold a civil debate about [politics] sometimes,” Burns said. “If you don’t agree with them, you’re automatically a bad person.”

Even among Republicans at the College, Burns said there is no universal agreement about Trump.

“There’s been a bit of a schism in the party,” Burns said.

For the candidates running at the state and local levels, it is unclear whether the “Trump phenomenon,” as former House Delegate Mike Watson called it, will help them or hurt them in their own races. Cordasco said many voters to whom she has spoken while canvassing are still undecided.

“About 40 percent of the doors I go to, they don’t know who they’re voting for for President. So there’s a big opportunity either way,” Cordasco said.

Further down the ballot is State Senate candidate Thomas Holstein. Holstein supports Trump and admits that he shares Trump’s controversial tendency for gaffes.

“I’m excited [about Trump], but if he would be a little bit quieter, and not express so many things — I’ve done it too, I’ll admit it, I’ve talked to some people and I’ve said something I shouldn’t have said,” Holstein said.

To Holstein and to other attendees, political correctness has no place in politics. Holstein believes this bluntness helps his campaign more than it hurts it, and he hopes to use this strategy to his advantage.

Holstein said that some of his biggest campaign concerns were developing local business, cutting taxes and increasing security. Additionally, he hopes to run a smear-free campaign.

You know, I run a clean election, I’m not mud-slinging at anybody,” Holstein said.

“You know, I run a clean election, I’m not mud-slinging at anybody,” Holstein said. “And them two are back and forth mud-slinging, and it’s not doing anybody any good.”

Mud-slinging aside, the enthusiasm for local elections seemed to unite the Republicans gathered at the Victory Headquarters more than their enthusiasm, or lack thereof, for Donald Trump.

“People are just kind of hoping ‘Let’s just get through this and get it over with,’” Bostron said.