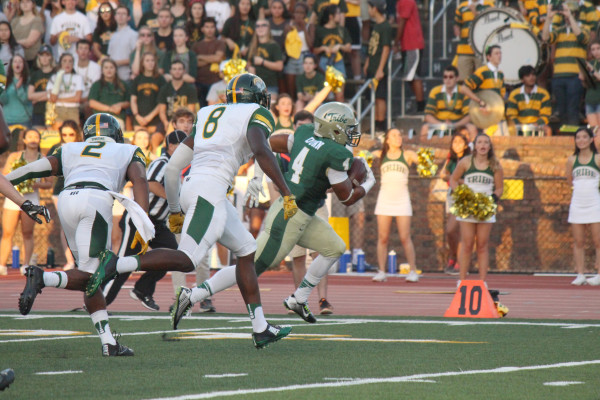 With nine and a half minutes on the clock in the fourth quarter, No. 13 William and Mary already held a 28-10 advantage. On the second play of the Tribe’s drive, redshirt freshman tailback Albert Funderburke sped past multiple defenders for a 57-yard touchdown run to put the nail in Norfolk State’s coffin, cementing victory in Saturday’s Zable Stadium Renovation Celebration.

With a final score of 35-10, the College (2-1) overcame a slow start to win its home opener over the Spartans. All five of the Tribe’s touchdowns came via the young running back pair of Funderburke and junior Jonathan Dunn, who combined for 226 of the team’s 277 rushing yards.

The game began at a slow pace, with the Tribe and the Spartans (1-2) trading three-and-out drives for the majority of the first quarter. Norfolk State found the endzone first when  quarterback Greg Hankerson charged in from 26 yards out at the 5:49 mark. The College responded quickly with the first of Funderburke’s three touchdowns with 1:48 remaining in the opening quarter. Funderburke took the ball in for the last yard of the drive, but the main highlight was the set-up. Senior quarterback Steve Cluley threw to the deep right side of the field on 2nd and 17, somehow finding junior wideout Daniel Kuzjak 45 yards away for the completion.

With the game tied at seven, the second quarter Tribe offense was all Dunn, as he broke open the scoreboard with both of his rushing touchdowns. After a NSU three-and-out right before the quarter break, Dunn struck with a 16-yard touchdown that had been set up by a pair of Cluley completions to wide receivers sophomore Jack Armstrong and junior DeVonte Dedmon, putting the hosts up 14-7. Finding a rhythm earlier than the first two games of the season, the defense quickly dispatched the Spartans, only allowing seven yards on the following drive and giving the College the ball near midfield after a punt. Funderburke and junior tight end Andrew Caskin kept the ball moving, though the Tribe entered the red zone via a Spartan personal foul that put the line of scrimmage at the NSU 14-yard line. A pair of Funderburke rushes followed, but Dunn ran the final yard for his second touchdown, making the score 21-7.

Norfolk State did not go scoreless in the second quarter, however, as NSU kicker Cameron Marouf drilled a successful 36-yard field goal on 4th and 9. With 10 points and 2:53 remaining in the first half, the Spartans would not score again for the remainder of the contest. The College looked poised to push the score to 28-10 before the break, but on 3rd and goal on the 6-yard line, Cluley threw his third interception of the season as Spartan defensive back Bobby Price picked off the three-year starter in the endzone. Entering halftime, the Tribe led 21-10.

Coming out of the locker room, the College had renewed energy as it appeared to pick up its pace on both sides of the ball. After a three-and-out to start the half, the Tribe made up its effort on defense with a significant sack by junior defensive end Matt Ahola that brought NSU back 17 yards. Facing 4th and 23, the Spartans were forced to punt from their own 8-yard line on a drive that had a total of -13 yards.

“We started playing with a little more enthusiasm on defense …  and a little more confidence,” Laycock said. “Our secondary guys were breaking some of the passes, being aggressive and going after them, and that’s something we haven’t done a lot of really.”

Following the stop, the score remained stagnant as Cluley threw his second interception of the game as he threw down the middle right to NSU cornerback Sandy Chapman. He took responsibility for his picks after the game.

[The interceptions] were both my fault,” Cluley said. “It was on me … I’ve got to be smarter with it.”

“They were both my fault,” Cluley said. “One was, I think, there were two guys stacked over each other, the guy in front didn’t think I was throwing to him so he didn’t put his hands up, miscommunication. Second one, I thought the route was going to go a different way. It was on me though; I’ve got to be smarter with it.”

After receiving the ball from another defensive stop — this time allowing just four yards — the College offense opted to march down the field with no passes, taking nine consecutive rushes for 65 yards to score with 3:10 remaining in the third quarter. The carrier on the touchdown was once again Funderburke, his second of the night. The score was 28-10 finally after several missed opportunities, the game appeared to be out of reach.

Entering the fourth quarter, Norfolk State continued to struggle against the Tribe defense. With a sack by redshirt freshman Bill Murray and another by freshman linebacker Arman Jones, the Spartans failed to convert on 4th and 13 to give the College the set-up for the final score of the night. Murray talked about the pacing increase after halftime.

“We’ve started out pretty slow the past few games, but once we got in the locker room we knew what we had to do,” Murray said. “We had enough exposure to the offense and we really just came out there with everything we’ve got.”

Funderburke shined on a two-play, 61-yard drive with his 57-yard rushing touchdown. With the score at 35-10, the final score was set as NSU punted twice more and sophomore backup quarterback Tommy McKee knelt to let time run out and seal the Tribe’s second win of the game.

We’ve started out pretty slow the past few games, but once we got in the locker room we knew what we had to do,” Murray said. “We had enough exposure to the offense and we really just came out there with everything we’ve got.”

The Tribe dominated on the stat sheet, led by Funderburke’s 137 net rushing yards and Dunn’s 89 rushing yards. After the game, Dunn credited the offensive line for the success of the running backs.

“They were getting movement all night,” Dunn said. “Obviously they created big holes as you saw, and that’s just opportunity meeting preparation right there. This is what we work for every day at practice, it should happen like that.”

Hankerson led his team’s rushing, cementing him as a solid dual-threat, but the defense held him to 43 net yards rushing and 125 yards passing. Cluley went 14 for 24 with the two picks and one sack, throwing for 179 yards passing.  Defensively, the Tribe had three sacks and held the Spartans to 11 first downs to the College’s 23 and a 5 for 16 third down conversion rating. Senior linebacker Stephen Lubnow led in tackles with eight.

As a result of the three touchdowns and game-high rushing yards, Funderburke was honored with Colonial Athletic Association Rookie of the Week honors. In the top 25 polls, the College moved up five spots to No. 8.

With the non-conference schedule complete, the College begins its CAA title defense this Saturday at Zable Stadium when it hosts Elon for the family weekend game. Kickoff is scheduled for 7:30 p.m.