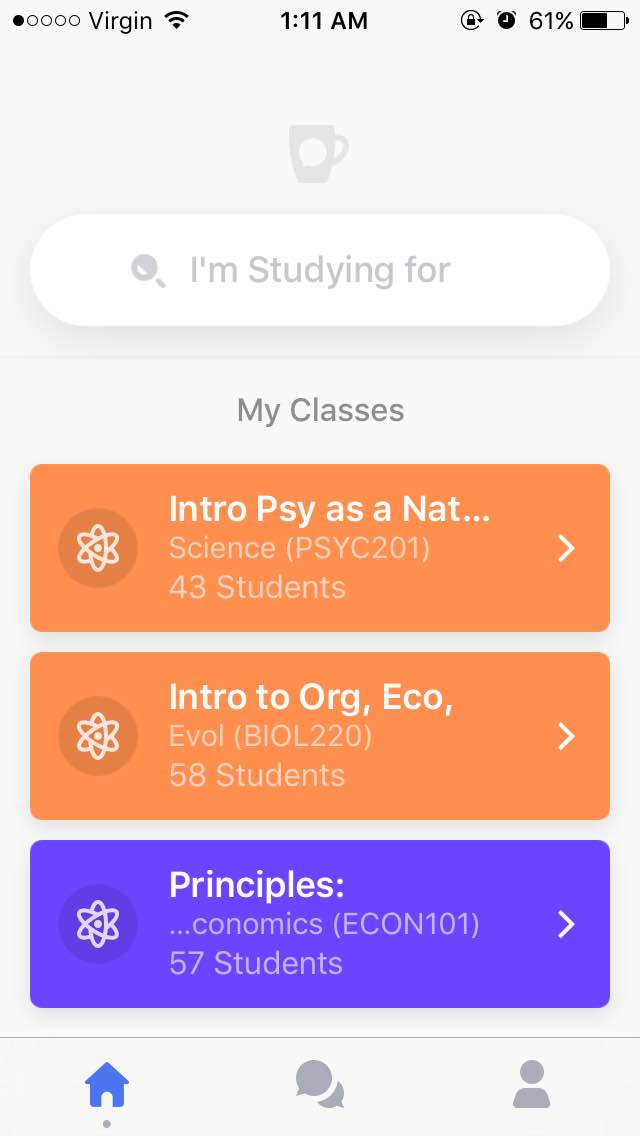 On the morning of Monday, Sept. 12, yellow fliers appeared in lecture halls and classrooms around campus reading, “Scan with Snapchat, we know you’re curious.” By mid-morning, with rumors of free coffee circulating, Aromas Cafe in Swem Library was experiencing a rush.

The fliers and free beverages were the work of founders Ryan Metzger ’18, Sravan Yeluru ’17 and six CoffeeCram interns who had gathered the night before to advertise the launch of their new app, CoffeeCram.

The two founders met in the  Entrepreneurship Club, an organization that Metzger founded in the fall 2015 semester.

Metzger, who was previously majoring in finance, subsequently dropped out to pursue CoffeeCram full time, while Yeluru is still a full-time student.

During the spring 2016 semester, the two said that they shared mutual dissatisfaction regarding their experiences at the College. They said they wanted to transform the nature of their education, which they described as one-directional.

Over this past summer, Metzger and Yeluru created a team composed of three developers, two designers, six marketers and three Snapchat specialists. CoffeeCram launched at the College Monday, Sept. 12, 2016, as a result of their efforts.

The founders said that they designed CoffeeCram to act as a medium for students on college campuses to connect to work on homework, review and ask questions. Upon opening the app, students are prompted to select their school, upload their course schedules, and then view and message other students enrolled in the same classes.

Yeluru said that CoffeeCram seeks to make large, lecture-style classes more personal. He continued that in many of the introductory science classes he has taken, he was often met with blank faces.

“College is a place to be collaborative,” Metzger said. “That’s what college was founded on. It’s a place for people to come together and share their ideas.”

According to the founders, this vision was the inspiration behind CoffeeCram.

Nathaniel Clemens ’17 was one of the students who downloaded CoffeeCram, enticed by the free drink at Aromas. Clemens said that he would typically use Facebook Messenger to contact other students in his classes about assignments or questions, but said he would consider using the app for collaborative purposes.

“To have a more concentrated place where you know you’re going to be talking about schoolwork, I think that’s a really cool initiative,” Clemens said. “It can facilitate that, and it can facilitate connections that you might not have made before.”

Abby Shukan ’19 said she was less convinced that the app would work. She said that the lack of students that have enrolled in her classes on CoffeeCram makes it difficult to use.

“I don’t really think people are using it,” Shukan said. “When I searched for my class, there were a bunch of classes that came up on the list, and a bunch of them had zero people in them.”

Sidney Lykins ’19, on the other hand, said that she downloaded CoffeeCram to take advantage of the promotions used to advertise it.

“I downloaded it for free ice cream,” Lykins said.

Metzger and Yeluru used funding from investors to fund promotions at Aromas and Baskin Robins, where students could receive either a free coffee or ice cream by presenting the app to cashiers. When asked to provide data, Metzger and Yeluru said they were unable to disclose usage statistics and costs of the promotions.

While the College is the first test for CoffeeCram, Metzger and Sravan said that they hope to expand the app to other schools in the area, such as University of Virginia, University of North Carolina at Chapel Hill and Duke University.