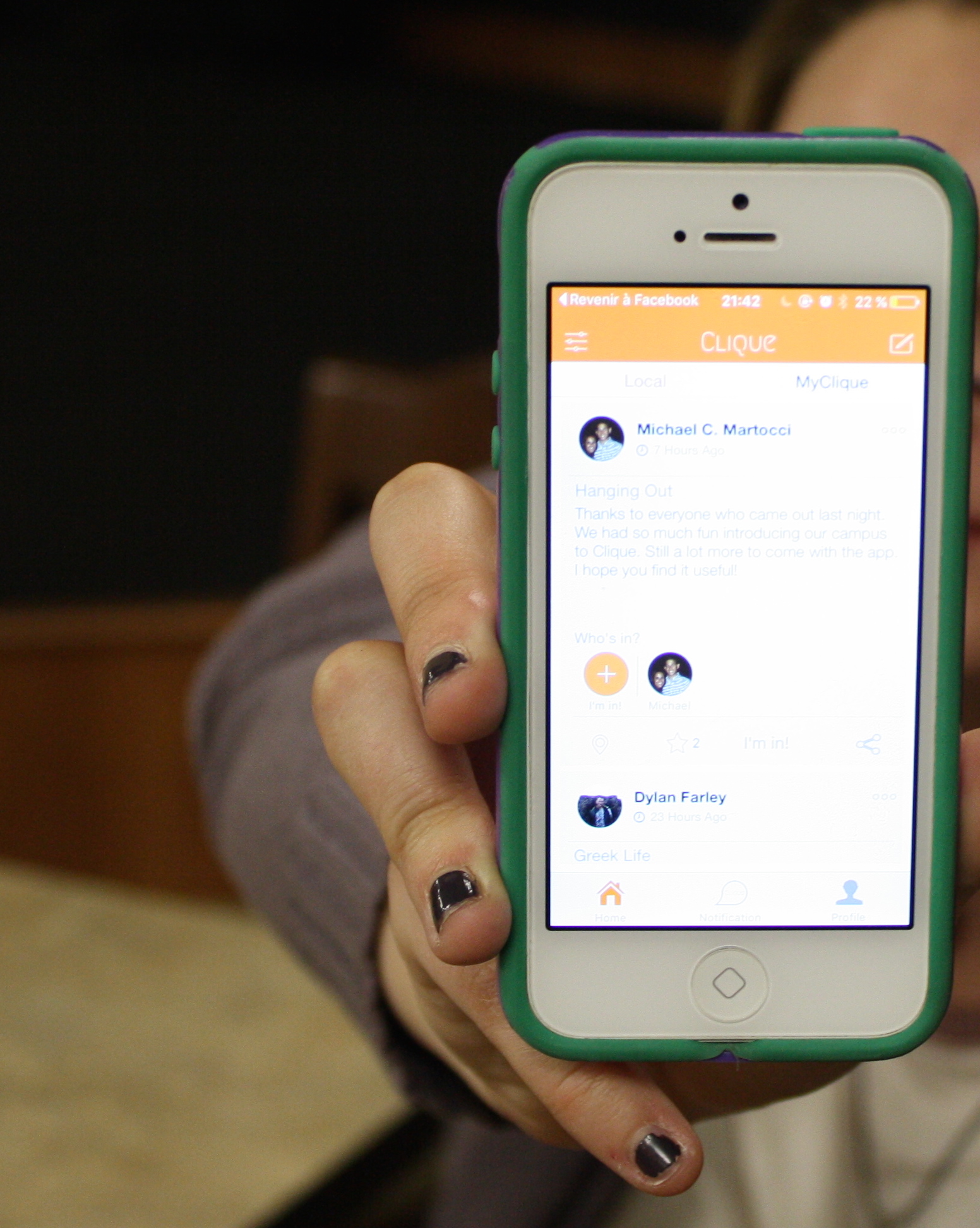 Clique, an app that aims to break down social barriers and create new friendships, officially launched at the College of William and Mary Saturday, Oct. 17.

The app’s co-founders Michael Martocci ’17 and Anthony Golaszewski from Rutgers University created the app that they hope will allow students to socialize with fellow students who share similar interests. The app lets users see groups of people who are hanging out nearby as well as see “sideline” users who are available but have not yet posted.

“The inspiration of the app came from the love of basketball,” Golaszewski said in an email. “The game taught me to compete and strive to win. Playing … helped me form long term friendships with teammates and opponents. The reason we formed these friendships was because of the common interest of basketball. After my first year at St. Joseph’s College in Brooklyn, New York, I realized I wanted to move back home and attend Rutgers University. I was eating at a diner and a teacher asked me how my day was going. We chatted for a bit and we had a common connection, we both loved the game of basketball. We named our favorite players and talked about who the best teams in the NBA were. I asked him ‘do you know where people play pick-up games on campus?’ and he replied ‘since I was here, I haven’t seen many people playing at the park or Rec Center.’ I searched the App Store for an app that could assist me but the results turned out negative.”

Following this encounter, Golaszewski reached out to Martocci to start designing an app. They began drawing out their initial visions for the app and then started using Photoshop to create more elaborate designs.

“I got this idea that there are more potential uses for this app than to find people to play basketball with,” Martocci said. “I thought it could be a way to bring campus communities together. Something I’ve been really thinking about is how we shelter ourselves and gravitate towards a small group of friends at the start of college. We get stuck there for a while, but there’s all these potential new friends out there on the other side of campus who you haven’t crossed paths with who could be a potential best friend. My driving passion for getting involved with this was that I wanted to bring people together that otherwise might not have come into contact with each other.”

The co-founders purchased a design theme for the app online and then modified it on Photoshop. Then they outsourced the coding to a the Indian company Colan Infotech. They worked every day making sure their design visions matched up with the coding. Once this process was done, they worked on getting their app approved by App Store.

Martocci and Golaszewski first launched the app on July 1, so they needed to have the app approved and uploaded to the App Store by then. After working with the App Store to fix some small errors, Clique was ready to be downloaded.

“It was a soft launch in July,” Martocci said. “We just shared it with friends and family back home to see how they interacted with the app. Over the summer we got about 1500 downloads, and we got good feedback. Once school started we went into hibernation mode and worked on it for two more months to get it to a point where it was ready to be shared at William and Mary.”

For current users of the app, like Perry Shands ’16, the app serves as a way to use technology while still getting to have face-to-face interaction.

“I think most apps and technology these days are designed to decrease the need for face-to-face interaction, but Clique is doing just the opposite,” Shands said in an email. “It uses technology to bring you closer to other people.”

The app has been advertised on Facebook and through friends, but an official launch party on Oct. 10 was the first big push to introduce it to the College. Once the founders are ready, students at other campuses will also start promoting the app.

“While I am not officially associated with Clique, I have been a witness and supporter of the idea from the beginning,” Gavin Oplinger ’16 said in an email. “We often discuss upcoming changes over lunch, and often bounce around ideas. This summer I took Clique to an international scale and made events in Europe, and I hope it really takes off.”

The partners have been working since October 2014 and have since made many changes, including bringing on a chief technology officer and intern developers who will help with making coding possible in-house. In the next few months, Martocci also says he sees much room for growth in the visual experience with the app.

While the partners do not currently make any profit off of the app and have funded it solely from personal savings, they know that sometime in the future they will also have to start making money. According to Martocci though, they don’t plan on doing that for a while.

“I have a weird background in this; I’m a finance major,” Martocci said. “This was never my plan in life. When I first started I thought we would make lots of money since apps are viable, but then I started to realize that what makes me happy about this app isn’t that I’m going to make money, but seeing other friends using this app and meeting up. I just want to see that this app becomes useful for people. I want to bring people together. It can be very helpful and important to our community. We pride ourselves on being a tribe, but in practice we all have our groups around campus. We want this app to really bring out that tribe feeling.”