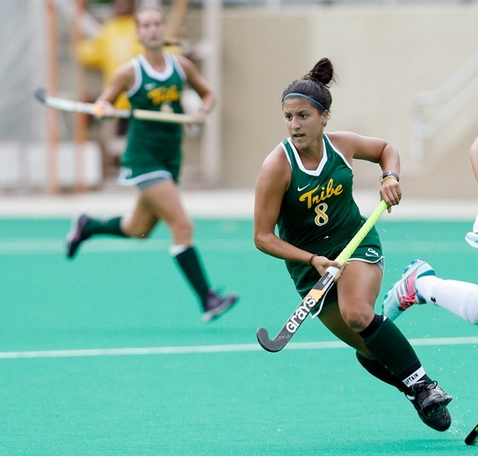 Coming off of a narrow 3-2 victory at Davidson last week, William and Mary returned home on Sunday looking to improve to 0.500, but fell 3-2 against in-state rival Liberty to drop to 3-5 on the season.

The College burst out of the gates in the first half, as junior midfielder Estelle Hughes ripped a shot toward goal from behind the dotted line. Junior midfielder Emma MacLeod met Hughes’ blast and deflected it into the net, giving the Tribe a 1-0 lead just over two minutes into the match. The Tribe appeared to have picked up where they left off against Davidson, where aggressive offense led to a victory.

Junior midfielder Emma MacLeod met Hughes’ blast and deflected it into the net, giving the Tribe a 1-0 lead just over two minutes into the match.

However, Liberty answered a mere eight minutes later, as forward Alynn Richardson leveled the score at 1 by scoring near post after strong buildup play. The College came close to regaining their advantage, but the Eagles blocked two close shots from junior forward Cammie Lloyd and senior forward Maria Jose Pastor in the 16th minute. Instead, it was Liberty that took the lead four minutes later, as substitute Carrie Logie tipped a shot in at the far post to put the Eagles ahead 2-1.

After being denied earlier, Lloyd and Pastor combined to tie the match in the 26th minute. Pastor delivered a pass to Lloyd down the baseline. Lloyd gathered and hit the ball to the opposite post to knot the score at 2. Both teams missed wide on several shots later in the half, and the teams entered the halftime break still tied.

The Tribe nearly went in front early in the second period, as Liberty denied four shots, including two from Lloyd, in under three minutes. Soon after, Liberty was awarded a penalty corner, but Rachel Suter’s shot was saved by freshman goalkeeper Morgan Connor.

Connor was unable to come up with a save on the next Liberty penalty corner, as Summer Parker tipped home a shot, giving Liberty a 3-2 lead it would not relinquish.

Even with an advantage, Liberty continued to pressure the Tribe defense, forcing Connor into four more saves in the final 20 minutes. The Tribe offense could not match Liberty’s intensity. In the final minute, however, the Tribe was awarded a penalty corner with a chance to tie. Liberty goalkeeper Allison Schaefer was up to the task, however, and made two match-saving blocks in the 70th minute to preserve a 3-2 victory for Liberty.

The Tribe must now regroup and prepare for the start of Colonial Athletic Association play, as it hosts Towson Friday at 7 p.m. and No. 12 Delaware Sunday at 1 p.m.