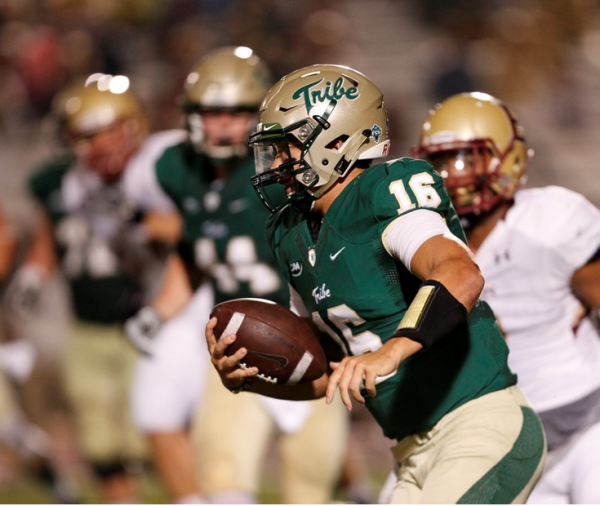 Thirty-three games played. 31 touchdowns. 22 interceptions. As of today, those are the career collegiate statistics for senior quarterback Steve Cluley.

For every 1.4 touchdowns scored, Cluley throws an interception. If he were a young quarterback on an unranked team, this would be a red flag. But, since Cluley is a three-year starter leading the No. 8 team in the Football Championship Subdivision, it’s something much more significant.

Through four games in 2016, Cluley has thrown seven interceptions. Three occurred during Saturday’s Colonial Athletic Association opener against Elon, while two occurred in the home opener the week prior against Norfolk State.

Last season, Cluley had only one interception through the opening nine games, a pick-6 against nationally-ranked James Madison. However, in the final three games of the season, he threw eight of his 10 interceptions for the season. Cluley’s turnovers in two of those games — both against archrival Richmond — stagnated the offensive production to a grinding halt that ultimately cost the College an outright CAA crown and sent the team home in the second round of the NCAA Playoffs.

The third game, a shootout with Duquesne in the first round of the playoffs, saw two interceptions, but the Tribe picked off the Dukes’ quarterback twice as well to keep momentum going. I’m still not sure what happened to the guy who went through nine games with only one interception at the end of last season, but the version of Cluley who replaced him is still hanging around in 2016.

In terms of scoring offense, the College currently averages 20.8 points per game compared to 2015’s 30.9 average, a decline of 10.1, the equivalent of a touchdown and a field goal.

After the Sept. 17 game against Norfolk State, Cluley took responsibility for the two picks, claiming he misread the situation or the route in both cases and that he would have to get better. So far, there hasn’t been any such progress. Elon may be a tougher team than NSU, but Cluley was 2-0 against them in previous meetings. The Phoenix appeared a bit stronger on special teams than in the past, blocking a kick and capitalizing on a bobbled snap on a punt attempt, but its defense didn’t appear anything exceptional compared to the last two years.

So what is the problem plaguing the Tribe offense? The picks are a problem, but I’m not sure if the cause is Cluley himself or if he’s a symptom of a larger problem on offense.

In terms of scoring offense, the College currently averages 20.8 points per game compared to 2015’s 30.9 average, a decline of 10.1, the equivalent of a touchdown and a field goal. The tight ends are the same while just one receiver, Christian Reeves ’16, and one rusher, Mikal Abdul-Saboor ’16, were lost to graduation. Some of the offensive line has shifted as well after the graduation of former center Andrew Jones ’16. In other words, not much of the offensive starting roster has changed, and in fact, running backs junior Jonathan Dunn and redshirt-freshman Albert Funderburke have been standouts in the rushing game so far. Yet the team is 2-2 with poor offensive statistics.

Head coach Jimmye Laycock ’70 said he thinks the offense was out of sync during Saturday’s game, which seems to be an accurate claim for every game except the NSU game, in which the passing game was out of sync but the rushing game was fantastic. Funderburke and Dunn accounted for five touchdowns on the ground to mask the problems in the passing game. In the Elon game, neither broke free on any big plays, nor did senior tailback Kendell Anderson, who reentered the lineup after sitting out with an ankle injury.

For now I can say that I, as a person who has always held an optimistic opinion of Cluley since I started watching Tribe football in 2013, am now a pessimist when it comes to having him at the helm.

The Tribe is first and foremost a rush-first team that has been a strong opponent in the CAA with its lethal combination in the backfield, usually switching between two running back options to move the chains and score. However, when that gets shut down by a defense, the passing game needs to be there as well. Going back to Cluley, I could excuse two picks against NSU and even the picks against Richmond in 2015, but the interceptions against Elon were definitely a sign that something is lacking in the offense this year.

Whether or not the fault rests with Cluley or the offensive schemes remains to be seen, but a question remains: Will the offense as a whole be able to step up and make another run at the CAA title, or will it be steamrolled by opponents like in Saturday’s 27-10 loss? At this point, my guess is we’ll be watching the Tribe stumble to another 4-4 conference slate and a narrow miss on the playoffs, though the two months between now and the selection show will hopefully prove me wrong. Cluley says he knows he has to get better, and with the offense that still seems to be in a “finding itself” phase through the first third of the season, it rests nearly entirely on him as the senior leader to turn the season around.

There’s a strong possibility that history will repeat itself and Cluley will continue throwing interceptions on key, must-score drives. We have to wait for more Saturdays to find that out, but for now I can say that I, as a person who has always held an optimistic opinion of Cluley since I started watching Tribe football in 2013, am now a pessimist when it comes to having him at the helm.