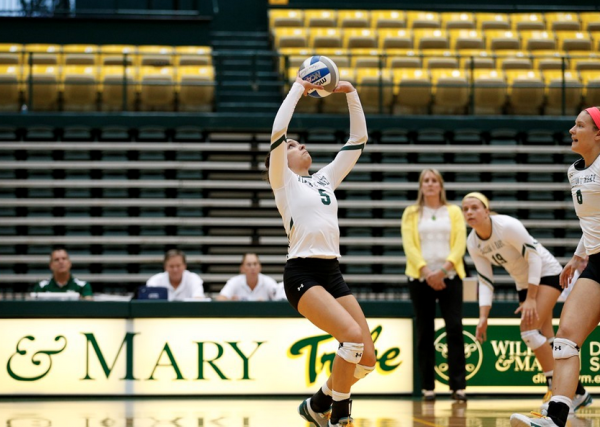 After a steady outing at the Gamecock Invitational last weekend, William and Mary’s team momentum went from an upswing to a sharp fall. With the beginning of Colonial Athletic Association play, the Tribe fell in straight sets to both James Madison and Elon.

On Wednesday, the College (6-9, 0-2 CAA) traveled to Harrisonburg, Va. for its CAA opener against perennial powerhouse JMU. The match began evenly, with the Dukes (10-5, 2-0 CAA) winning the first set by a slim 25-22 margin. Down 1-0, the Tribe stumbled through the second set and fell in a 10-point deficit, 25-15. Hope was not lost, however, as the third set went to extra points. Both teams exchanged points steadily, keeping the set knotted 16 times. At one point, the College held an 18-14 lead, and it looked like a set might go the visitors’ way. However, down 24-21, JMU charged through with a four-point rally to take the set to tiebreaker points. The College’s defensive wall was cut down by the Dukes as the home squad went 3-1 after tying at 29 to seal the 3-0 sweep.

“I have to give JMU credit,” head coach Melissa Ferris said to Tribe Athletics. “They are a good team who keeps the pressure on you. We battled in sets one and three and never gave up. In set two, we let them rattle us and we never got in rhythm. Even though we lost, I believe we got better as a program tonight.”

I have to give JMU credit,” head coach Melissa Ferris said to Tribe Athletics. “They are a good team who keeps the pressure on you. We battled in sets one and three and never gave up.

The Tribe had a chance to move to 0.500 in conference play Sunday afternoon but once again was overpowered by its opponent in a 3-0 shutout. The Phoenix (14-4, 1-1 CAA) was coming off a loss of its own to JMU two nights prior, so it was looking for its first conference win as well.

A close 25-21 set gave Elon an early 1-0 lead. Just as it did against the Dukes, the Tribe struggled with the middle set, falling by nine points 25-16. There would be no marathon third set this time, however, as the College fell 25-22 to give Elon victory in its home territory.

“This match was another reminder that we need to keep working hard and trusting the process,” Ferris said to Tribe Athletics. “These players are all in and that’s all I can ask for. Our time will come, and we’re going to work hard to make that happen sooner rather than later.”

This match was another reminder that we need to keep working hard and trusting the process,” Ferris said to Tribe Athletics. “These players are all in and that’s all I can ask for.

Foote and Biniak led the attack with 11 and nine kills respectively of the College’s 35, though the Phoenix out-killed the visitors 47-35. Sophomore setter Katie Kemp had a team-high 18 assists while Brenner had a rough outing with only 12 assists. Senior defender Gabrielle Pe led with 12 digs, closely followed by Zumbach’s 11. Blocks proved a big aid for Elon, as the Phoenix held a 9-1 advantage in that category.

Still searching for its first CAA victory, the Tribe heads to Boston to face Northeastern Friday night before heading to Long Island to face Hofstra — a team also 0-2 in the CAA — Sunday afternoon.