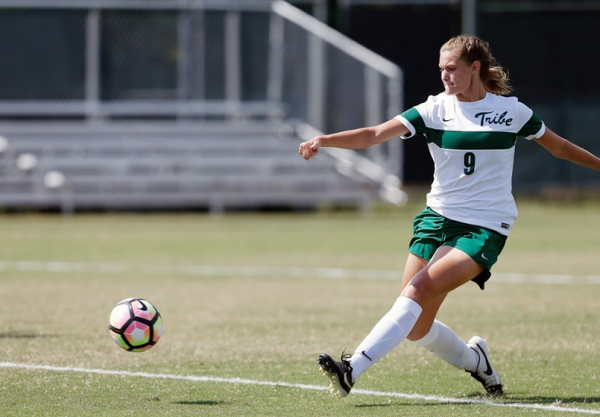 William and Mary endured an up-and-down weekend, doing the hard work by beating James Madison 3-0 before falling to Towson 2-1. The Tribe avenged its heartbreaking 2015 Colonial Athletic Association Championship loss to JMU by hammering home three goals in the opening period to close out the Dukes.

Last season, the College (7-4, 1-1 CAA) looked to be certain victors after jumping out to a 2-0 lead in the CAA Championship match last fall. However, that day the Dukes (3-7, 0-1 CAA) scored three unanswered goals in the second half to steal the trophy out from under the Tribe’s nose, winning 3-2. The College has not lost its penchant for scoring early and seems to have learned from last year’s trauma, holding strong for the second-half shutout.

After conceding one goal in her first start last week, freshman goalkeeper Katelyn Briguglio started for a second time against the Dukes and made a key early save from JMU forward Haley Crawford. Just minutes later, a Tribe freshman opened the scoring. Freshman midfielder Charlotte Hyland, starting her second game of the season, pounced on a free kick bouncing in the area to send home the College’s first goal.

The Tribe continued its pressure with junior forward Sami Grasso crashing a shot against the crossbar. The intensity paid off in the 13th minute, and freshman forward Sarah Segan notched her team-high 7th goal of the season. Junior midfielder Rachel Moore, the College’s other offensive catalyst this season, fed the ball to Segan one-on-one with the goalkeeper. Segan’s predatory instinct kicked in, and she knocked the ball over the advancing goalie to put the Tribe two up.

After a goalkeeper switch for the College, as junior goalie Samantha Johnson replaced Briguglio, Grasso’s offensive persistence paid off. She tripled the College’s advantage, trapping a free kick from the other side of the box before slotting the ball into the left corner for the third goal.

The Tribe is 3-0 in games decided by more than one goal, but the Dukes rebounded after half-time. Led by CAA Preseason Player of the Year Ashley Herndon, JMU had 13 shots-on-goal, forcing eight saves from Johnson. The Dukes were largely dominant during the second half, but a strong defensive performance from the College kept the shutout and the impressive victory.

However, the Tribe could not muster the same level of performance Sunday, slipping to a 2-1 defeat against a lackluster Towson team. The Tigers (4-7-1, 1-1-0 CAA) dropped their CAA opener in double overtime to Elon Friday, and Sunday’s match looked like another walk in the park for the Tribe after sophomore midfielder McKenzie Kober opened the scoring early. Kober scored her second goal of the season, playing a neat one-two pass with Segan and finishing at the left-hand post.

The Tribe has proven throughout the season that it can score early and often, but head coach John Daly will undoubtedly find room to improve the defensive unit. Right after halftime, Towson struck back. Tigers midfielder Justine Stoner struck a shot from distance, which pinged off the crossbar and just went across the line before bouncing out again. The goal was correctly counted by the referee.

The Tribe has proven throughout the season that it can score early and often, but head coach John Daly will undoubtedly find room to improve the defensive unit.

Immediately following the goal, both teams had chances, and Sami Grasso had a shot saved as the College attacked after kickoff. However, when the Tribe could not find a breakthrough, Towson could. A dangerous cross from the College’s left found Towson forward McKenzie McCaull, who looped her header over Johnson and into the back of the net.

Not to go down without a fight, the Tribe ratcheted up the pressure once again. Junior defender Elysse Branton’s shot was blocked, and both Segan and Grasso saw their shots saved. Towson heavily rotated its lineup as it clung to the lead, blocking Tribe shots left and right. Despite peppering the Tigers’ goal with 12 shots in the second half, and earning seven corners, the College could not make its dominance count, failing to score before the final whistle.

The College has the opportunity to get its CAA challenge back on track with a home match on Oct. 2 against Elon. The Phoenix, who were defeated comfortably by JMU over the weekend, are the type of team that the Tribe must beat if it wishes to fulfill their preseason CAA ranking, where it was chosen first by a vote of the league’s 10 coaches. Sunday’s match is scheduled for 2 p.m. at Martin Family Stadium.