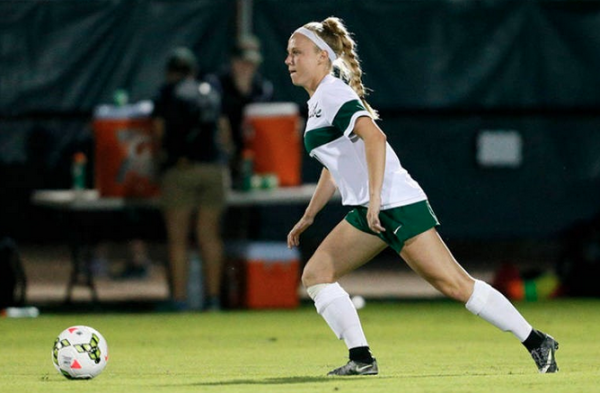 Riding a 2-0 advantage at halftime against an in-state rival in the conference championship match with its best record in three years, William and Mary couldn’t have asked for a better situation. Yet the College picked the worst time for its largest defensive breakdown of the season, as a James Madison trio of goals sealed the fate of the 2015 Tribe in a devastating 3-2 defeat Sunday in Hempstead, N.Y. with the Colonial Athletic Association title on the line.

The Tribe outplayed North Carolina — Wilmington in the semi-finals, shutting down the CAA’s No. 1 offense. Early into the championship match-up against the Dukes, it appeared that the College would repeat that defensive act. Senior midfielder Nicole Baxter fired in a corner kick to senior forward Katie Johnston in a play that looked eerily like the lone goal in the UNC — Wilmington game. Johnston’s header however, did not sail into the net, but rather was deflected to the head of freshman forward Mackenzie Kober, who placed the finishing touches on the goal. In the 15th minute of action, the Tribe held an early 1-0 lead.

Just before the close of the half, the Tribe fired another shot past Dukes keeper Ellen Forrest, as senior midfielder Leci Irvin sent a cross to the middle in front of junior midfielder Haley Kavanaugh for the shot, but the ball was deflected. William and Mary took a 2-0 lead off the foot of sophomore midfielder Rachel Moore, who raced up in the confusion after Kavanaugh’s deflected shot to take advantage of the rebound, providing the College with a key goal just before halftime.

As the first half ended, it appeared that the favored Tribe — featuring three players with All-CAA First Team honors, the Defensive Player of the Year in senior keeper Caroline Casey, a No. 2 ranking in the conference and the Co-CAA regular season champion title — would cash in on its first CAA title since 2011. The College was 10-0 in the regular season when holding a two-goal lead at any point in a game, and 14-0 when scoring first in a game in the 2015 campaign.

Yet the improbable defensive breakdown became reality. Despite outshooting the Dukes 17-8 on the game, the Tribe allowed three goals in the final 45 minutes to lose the conference title. The first of the Dukes’ strikes came right after the intermission, as a long pass and a cross provided James Madison with a quality chance in the 47th minute, of which the Dukes promptly took advantage.

Despite outshooting the Dukes 17-8 on the game, the Tribe allowed three goals in the final 45 minutes to lose the conference title.

Sophomore forward Sami Grasso nearly extended the College’s lead back to two goals with a shot off the crossbar in the 68th minute. William and Mary wouldn’t score again, yet the Dukes continued to be efficient on offense as JMU — ranked No. 4 in the conference in shots and goals — penetrated the No. 1 CAA defense again with a goal in the 75th minute off a perfectly-timed cross pass to a one-touch shot. Knotted at two-apiece, the Tribe tried to pull ahead to close the game, missing shots in the 81st and 82nd minutes.

The Dukes scored the game-winning goal in the 85th minute, a shot by junior Allie Bunner to the corner of the net. Bunner proved to be a thorn in the side of the Tribe all game long, providing an assist to CAA tournament Most Outstanding Player Ashely Herndon, a forward for the Dukes, who scored twice in the matchup. The final five minutes ticked down, and the defeated Tribe walked off the field having blown the biggest lead of the season and allowing the most goals of the season at the worst time possible in the 3-2 loss in the CAA championship final.

The loss is made all the more bitter by thoughts of what could’ve been. With the recent 2015 Women’s World Cup victory by William and Mary alumna Jill Ellis ’88 and her visit to the College’s team this semester, the storyline proved too good to be true, as the Tribe could not mirror the distinguished alumna’s success.

However, the Tribe received at at-large bid to the NCAA tournament playoffs, and oddly enough a better position in the post-season than CAA champion James Madison. The Dukes will play No.3 seeded Duke in the first round, while the Tribe has a matchup against No.7 seed Central Florida. The CAA as a whole did very well in the postseason selections, as both Hofstra and UNC-W earned post-season berth, marking the first time that the conference has sent four teams to playoff action. The game is set for November 14 at 7 p.m. As the lower seed, the Tribe will travel down to Orlando for the first round matchup.