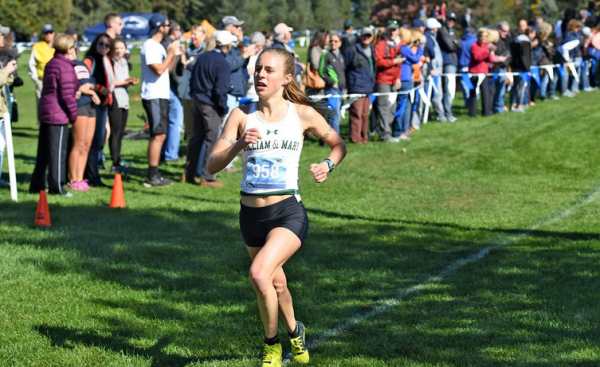 William and Mary cross-country turned in exceptional performances at two different meets over the weekend. The men’s and women’s varsity line-ups made the trek north to run in the Penn State National XC Open in State College, Pa., while the rest of the team competed at the CNU Invitational in Newport News.

In Happy Valley, junior Regan Rome placed fourth in a 20:17 clocking to lead the Tribe to an 8th place finish in the women’s 6K race. The NCAA All-American started off at a more conservative pace than the early leaders and planned to gradually reel them back in over the later stages of the race. But Rome ended up running out of real estate and had to settle for fourth.  Penn State’s Tessa Barrett, Elizabeth Chikotas, and Jillian Hunsberger swept the top three places to help the Nittany Lions defend their home course and capture the team title. Barrett won the individual race, recording a time of 20:06.

“My race didn’t really go to plan,” a disappointed Rome said to Flotrack after her race. “I was hoping to go out a little easier and catch but I was just a little too far back in the race and was never able to make contact with the leaders. So, I’m a little bummed out with my race today, but hopefully I can learn from it.”

In the men’s 8K race at Penn State, sophomore Ryan McGorty paced the Tribe with his 33rd place finish in 25:44. The Tribe had an excellent 1-5 spread to finish a solid eighth in the team race, with only 19 seconds separating McGorty and freshman JP Trojan, who crossed the finish line in 54th. The other scoring runners for the Tribe included Dawson Connell (25:49) in 40th, Faris Sakallah (25:56) in 46th, and Trevor Sleight (25:57) in 48th place. Christopher Hoyle (26:14) and Cooper Leslie (26:27) finished in 66th and 75th to complete the varsity line-up. The College recorded a score of 221 points; Oklahoma State narrowly won the team title over Ole Miss by scoring 47 points. The Rebels were a close second with 49, led by MJ Erb’s individual victory in a smoldering 24:49.

Head coach Chris Solinsky evaulated his race plan for his athletes after the race and noted to Flotrack that he had them start out a little too slowly. But he was pleased with how well they worked together as a pack to move up.

My fault is having them start out a little too far back today but they worked through the field really well as a pack,” Solinsky said to Flotrack.

“My fault is having them start out a little too far back today but they worked through the field really well as a pack,” Solinsky said to Flotrack. “We were 19-second spread one through five, just over thirty one through six, so they executed perfectly. It was just my fault having them go a little more conservatively, but that’s something we can remedy going forward.”

In Newport News, the William and Mary men dominated their race en route to the team title.  Junior Ryan Thompson placed first in the Division I standings, covering the 8K course in a time of 25:43 to lead the College. The Tribe recorded a team score of 27 points to top VCU’s 50.

In the women’s 6K race, freshmen Karina Tavares (22:35) and Julia Wood (22:38) paced the Tribe in third and fourth place. The College recorded a score of 42 points to place second in the team race. VCU won with a score of 22.

The Tribe will next head to Newark, Delaware on Oct. 29 to compete in the Colonial Athletic Association Championships. The men will look to clinch their 17th consecutive title while the women will look to seize the CAA crown for the fifth straight year.