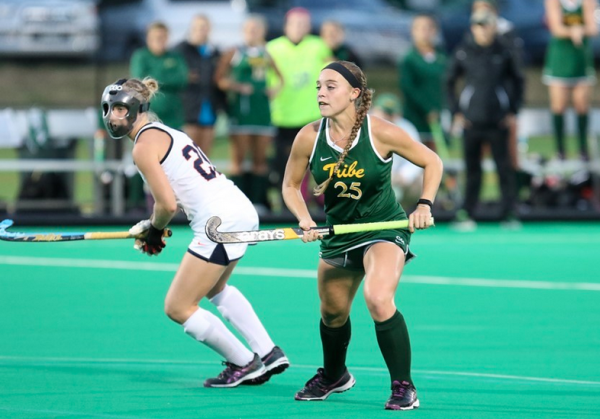 With the playoffs approaching, William and Mary (9-9, 5-1 Colonial Athletic Association) split their last two games, losing 3-2 to Fairfield and beating Hofstra 4-3. The team goes into the playoffs on a high note, clinching the second seed in the CAA tournament.

Friday night, the Tribe fell 3-2 at Fairfield (7-12) in a non-conference matchup. The Tribe started slow, surrendering the first two goals of the game to the Stags. In the first half, Fairfield outshot the Tribe five to four and created two corners while the Tribe had none.

15 minutes into the second half, the Tribe finally struck. Senior forward Maria Jose Pastor scored off a penalty corner. Her fourth goal of the year pulled the Tribe within one.

The Tribe continued their pressure and tied the game at 2 quickly in the 55th minute. Sophomore midfielder Ashleigh Nottingham hit junior midfielder Estelle Hughes, who promptly put the ball past the keeper from the top of the circle. The Tribe was riding a wave of momentum, pressuring the Stags and looking for the lead.

10 minutes later, that wave was stopped in its tracks as Fairfield took a 3-2 lead from a penalty corner. The Tribe rallied late, but could not find a goal to even the score. Despite a dominant second half in which the Tribe outshot Fairfield nine to four and was awarded four more corners than the Stags, it could not overcome a lackluster first 40 minutes.

The Tribe flipped the script Sunday, as they put away Hofstra (9-10, 1-5 CAA) in a back and forth contest in New York, 4-3. Yet again, the Tribe began sleepily, giving up the first goal to the Pride in the 15th minute of the game.

However, the College responded just minutes later. In the 21st minute, junior forward Cammie Lloyd scored on the Tribe’s first penalty stroke of the season after being brought down hard in the process of shooting.

Then, just eight minutes later, Lloyd hit pay dirt yet again, putting a cross from Hughes into the open net. The 14th and 15th goals of the season for Lloyd put her tied for third in the CAA in both goals and overall points.

The Tribe would go into the half up 2-1. ]Hughes found herself in the right place in front of the goal to finish a rebound in the 59th minute and gave the Tribe a 3-2 edge it would not relinquish.

In the 53rd minute, Hofstra tied the game, just putting the ball past freshman goalkeeper Morgan Connor. The Tribe pushed back, though, as Hughes put the Tribe back in front to stay. Hughes found herself in the right place in front of the goal to finish a rebound in the 59th minute and gave the Tribe a 3-2 edge it would not relinquish.

Quickly, Hughes put herself in a scoring opportunity once more, putting the ball home on a great pass from freshman midfielder Cassidy Goodwin. The score, in the 74th minute, marked her seventh on the year and pushed the Tribe lead to 2.

Hofstra would score with less than a minute to go in the game, but the Tribe would hang on to win their final conference game of the regular season.

In the second half, the Tribe got outshot significantly, 13-6, but they were both efficient with their offensive opportunities and stout defensively. Connor, fourth in the CAA in goals against average among qualified keepers, had nine stops on the day.

The Tribe clinched the second seed in the four-team CAA tournament Friday afternoon with the result of the James Madison win over Hofstra. The Tribe will take on three seed James Madison in one semifinal, while one seed Delaware, the tournament’s hosts, will battle with four seed Drexel in the other. The winner of each semifinal will advance to the championship game to be played Sunday, Nov. 6.