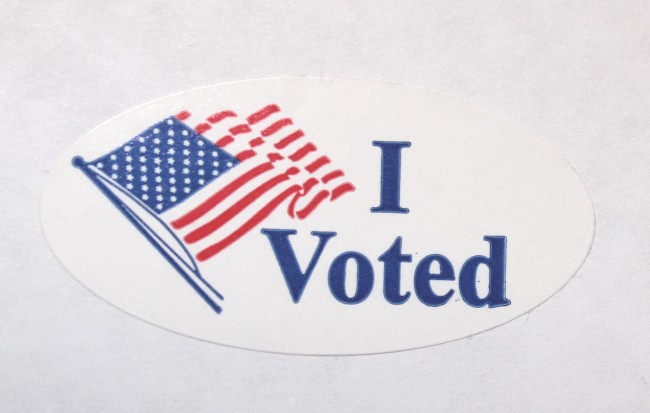 However, in the state of Virginia, there are also 16 official write-in candidates for president voters have the option of including on their ballot.

While Virginia voters are free to write in the name of any individual for president, the Board of Elections only counts separate totals for officially registered write-in candidates who have filed a Joint Declaration of Intent to be a Write-In Candidate.

Some of these 16 candidates are the nominees of third parties selected through the convention process, and others are running completely independently. Many of them were inspired to run after the presidential primaries, while others said that they have long felt that they are not represented in presidential elections because of the two-party system.

Robert Buchanan said that, in March 2016, he decided that even with approximately 20 candidates left in the primaries, there was no one who he thought represented him.

He decided to put together a website and start qualifying to be on the ballot in states throughout the country.

“You can see the people who are running in the major and minor parties, and I couldn’t vote for any of them and I started looking for alternatives and I couldn’t find any,” Buchanan said. “I’ve been involved on the periphery of politics for a long time but I’ve never run a political campaign. I do have 34 years of experience working for the federal government and worked for the Navy and the Navy Reserves, and have had involvement with how the government is run. It’s just that things are crazy this year and you can only take it for so long.”

Buchanan said that he has identified the economy as the highest priority issue in this election.

His dad was a steelworker in Ohio and Buchanan said that the steel mill regions of the United States have not been helped by the federal government.

He also worries that there are not enough jobs for Americans, especially with the new wave of technology, robotics and artificial intelligence.

“I mean, everything is going to chance and nobody is talking about how we are going to ride that wave of change and come out,” Buchanan said. “The first thing I’d like to see happen is an infrastructure program. Infrastructure and education would be the first two things that I do.”

Buchanan said that to help with the economy, he would also like to restructure the educational system in order to provide free education for all students in the United States.

He would also like to make pre-kindergarten more accessible to all students.

He said that if universities re-allocate the money they already get from state governments they would be able to help provide free tuition to their students.

Darrell Castle is the presidential nominee selected by the Constitution Party.

He has a three-pronged platform that addresses the issues he feels are most important in this election: making sure that the United States leaves the United Nations, gets rid of the Federal Reserve system and revoking access to abortion provided by Roe v. Wade.

“I care about getting the United States out of the United Nations,” Castle said. “I want the country to be a free and independent nation once again. The United States should end the Federal Reserve, which could easily be done, and back the system on something other than the promises of politicians. Also, the life issue — I think that those people who live inside their mothers are actually people regardless of what the Supreme Court says; we should not bestow upon government the power to decide.”

Castle said that to leave the UN, the United States could force the UN to relocate its headquarters and stop funding UN actions. To end the Federal Reserve, he said that Congress would have to pass an act that would transfer the monetary system to a group of private central banks so that it could be backed by silver and gold.

“Kennedy tried to do that, but he didn’t survive the efforts,” Castle said.

Scott Cubbler said that his experience working in homeland security after 9/11 made him dissatisfied with the process and the candidates from the two major political parties.

“I spent most of my professional life as a public servant, I worked as a businessman and joined the Marine Corps and have been in homeland security since 9/11, for the last 15 years or so,” Cubbler said. “It looked to me based on what I saw with the candidates that are out there that neither of them have the background needed to perform the role of presidency.”

Cubbler said that he believes the government needs to take a more holistic approach when addressing all matters it plays a role in, particularly the current hot-button issues of border security and racial tension.

He advocates bringing in the Departments of Commerce, Education, Labor, Agriculture and Justice to the issue of immigration and border security.

He said that he prefers to refer to this process as “border engagement.”

In terms of racial tension, Cubbler said that often times people don’t understand where people of color are coming from when they describe their experiences.

He said that he is sympathetic to both sides of the problem of police brutality, but that he saw racially motivated police brutality firsthand growing up in a predominantly black neighborhood.

To address racial tension, he would like to end the process of promoting criminal prosecutors based on conviction rates.

Cherunda Fox is a retired protective services worker who is running as an independent candidate for president. According to her campaign website, she has prioritized education, addressing racism and inequality in the government and policy reform as issues she cares about.

“I saw that Donald Trump might  make it to the front of the Republican ticket, and if he made it, he would be the worst possible candidate in the world,” De La Fuente said. “We need to stop Trump. I decided to run for my party, the Democratic Party, but I came in third in the primaries. In the meantime, I was selected as the nominee for the Reform Party.”

De La Fuente said he advocates for free, virtual reality universities, where students can attend classes online, so that the United States can be more competitive world-wide.

He wants to address the national debt, immigration reform and provide health care and government services to senior citizens as well.

One step he has identified to achieve this goal is to require pharmaceutical companies to lower the prices of all medications they produce.

Would you find it hard to believe that “less taxes, more beard” is the platform of a presidential candidate?

That’s the platform of high school teacher Ben Hartnell, who entered the political process in 2012 to show his students the nuances of politics.

Hartnell doesn’t have a published platform on all of the issues that have come up in this election, but he said that he welcomes people to vote in polls on his website about what the major issues should be.

One issue that he does prioritize is education.

“I don’t want to share my stance on things like abortion in front of 14 and 15-year olds who are very impressionable — that’s not my place to decide for them,” Hartnell said. “In terms of issues that I’m passionate about, there’s education, everything centers back to education. If nothing else, this election has been an education tool.”

Hartnell said he would like to push nation-wide to reform schools so that public schools would not have to cut extracurricular activities or arts programs.

He would also like to simplify the tax system to remove tax write-offs, which is something he’s discussed with his students in economic theory classes.

“I want people to know that change can happen,” Hartnell said. “We cannot sit on the sidelines and complain. Especially for the 14 and 15-year olds who are impressionable, I want them to be able to believe that they can change the state of affairs and that when they vote that they need to take it seriously.”

Tom Hoefling has believes there are 10 keys to saving the United States. According to his campaign website, the first is to remind people that their source of rights is God.

Following this, his other priorities include restricting abortion, opposition to same-sex marriage and the natural family, and opposition to gun control measures.

Chris Keniston, after years of serving in the United States Air Force, decided that he needed to find a political party that better represented his ideology, which prioritizes the Constitution.  Keniston  chose the Veterans Party of America.

“I chose the Veterans Party because I didn’t have to compromise anything at all,” Keniston said. “As a senior leader in the party I was part of vetting potential candidates for president. People encouraged me to seek the nomination, so I put my money where my mouth was.”

Keniston said that his campaign was built on three pillars: unity, security and opportunity.

He said he wants to reduce divisive and polarizing political rhetoric to prevent violence at rallies, ensure that the border is secure and create more jobs.

“We have got to do something to open opportunities,” Keniston said. “This was supposed to be the country where you could be born into abject poverty and change your station in life. That is much more difficult than it used to be.”

He said that he believed this could be reversed by creating more competitive jobs that will reassert the United States’ role in the global economy.

Michael Maturen is the American Solidarity Party’s official nominee for president this year and he said that in this election, the right to life is the issue he sees as being most important.

“When I speak of the life issue I am not speaking solely of abortion,” Maturen said. “To us in the American Solidarity Party, life doesn’t end when you cut the umbilical cord. There should be a sanctity and dignity of life from conception all the way to natural death.”

For Maturen, this means the government needs to consider euthanasia, physician-assisted suicide and ending the death penalty.

He also said that he supports a social safety net for women who choose to carry their pregnancies to term. Policy changes that he would like to see include a constitutional amendment declaring the personhood of the unborn that would negate Roe v. Wade.

Maturen also said that it is important to bring back statesmanship to American politics and work to end gridlock in Congress.

Michael Puskar said that he is mainly running on principle, since he doesn’t believe wealthy individuals can represent the majority of Americans.

Puskar said the two things that he supports the most in this election are children and anything to do with the military and veterans.

Puskar said that under his administration, all veterans would have a job through the federal government. He said that ideally, veterans could work to improve the infrastructure — perhaps fixing bridges and roads.

He said that while he has considered the issue of legalizing marijuana to help with this, he does not have a stance on that.

“One other thing that’s really important is that we need to get rid of the electoral college system — but that’s hard to do,” Puskar said. “That would give third party candidates a bigger piece of the pie. In general, the most important thing, is that students need to educate everybody.”

Others running for president as officially registered write-in candidates, including Laurence Kotlikoff, Luis Ramos, Robert Rice, Michael Smith, Kora Roberta Katz Vakil and Barbara Whitaker, could not  be reached by The Flat Hat.