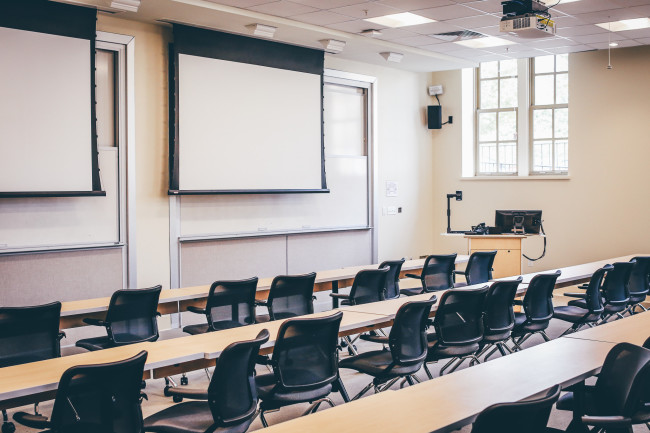 Last Thursday, the students in Professor Susan Peterson’s international security course were given a choice: they could either proceed with their scheduled topic on the syllabus or discuss the effects of Tuesday’s election on their class’s subject matter.

Her students chose the latter.

Last week, professors throughout the government and international relations departments improvised changes to their classes to address the results of the election and how President-elect Donald Trump will change students’ perspectives.

Peterson was not surprised by her class’s decision.

“Overwhelmingly, they wanted to talk about the election and what it would mean for foreign policy,” Peterson said.

Relating the discussion back to the subject of the class was also a top priority for her.

For both sections of her class on Thursday, Peterson and her students contrasted President Barack Obama’s ideology toward foreign policy with Trump’s.

According to Peterson, the class first looked at Obama’s foreign policy legacy — opening relations with Cuba, free-trade and the Trans-Pacific Partnership, and the Iranian Nuclear Deal.

After that, Peterson asked her class to focus on the future, specifically on what Trump would have to do to change these foreign policies.
Peterson also said that while the election’s effect on international security is not attracting as much attention on campus as other topics, it is still important in her field of study.

“What’s worrying people around campus the most is things like basic civil rights, anything to do with race, or sexual orientation or religion,” Peterson said. “Foreign policy does not elicit the same sort of tears or grieving that we’ve seen in other contexts, but people are worried.”

The day before, government professor Jeffrey Kaplow dedicated his classes on international security to the same discussion.

In both sections, he said that they talked about what the election means in terms of the global security environment, not discussing the election specifically, but instead its impact on international security.

Kaplow made the decision to change plans as soon as the election results were released.

“After I saw that Trump won, I made the decision to switch for a couple reasons,” Kaplow said. “One, it was unlikely given the late night that we had on election night that the class had done the scheduled reading, so I thought, I might have a better shot of getting discussion going if I talked about what the election meant in terms of the material. It really does make a change in how U.S. foreign policy works, so I think it’s an important piece of understanding international security.”

Kaplow also said that the policies of the United States are important on the international stage.

“Because the U.S. is such a major actor, I think that it’s important when thinking about international security to think about what the U.S. is going to do,” Kaplow said.

She said she could sense a somber mood in her class after reading their comments on an assigned reading the night before and expected to change from the intended topic of development in India.

“I started out saying, Look, I know it’s been a long night and some of you might have not gotten much sleep, and we usually discuss current events, and I’m happy to discuss topics related to India, but if you guys want to discuss this election and what your thoughts are I’m happy to do that also’,” Mullen said.

Like the other two classes, the students chose to spend the hour speaking about the election results. Mullen said she wanted to create an open forum for students to voice their concerns.

“There was a Hispanic woman who broke down in tears because she has family and friends who might be deported under a Trump administration, and another white female student who talked about the fact that her sibling had just come out in high school and she spent several hours the night on the phone with her sibling — her sibling was crying — talking about how hard it had been to come out and that the environment would be less accepting,” Mullen said.

Mullen said that her intention was to relieve some of the anxiety that her students were expressing by giving them a chance to talk.

“I kind of just let students just talk,” Mullen said. “I could tell there was all this frustration and worry, and I think it was cathartic in many ways just to talk about it.”
Going forward, none of the professors said that they were planning to make any changes to their syllabi or assigned readings; however, the lens through which they study international relations will not be the same for at least the next four years.

Peterson said that she anticipates her class’s discussion of foreign policy changing long-term after the election.