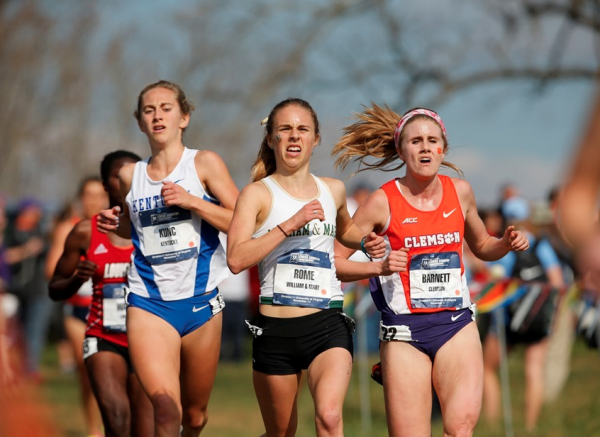 It was worth the wait.

Regan Rome finished sixth at Friday’s NCAA Southeast Regional in Charlottesville, Va. — one agonizing place shy of earning an automatic individual qualifier to the NCAA championship. However, the junior found out Saturday that she received an at-large berth in the national meet by the NCAA Division I Men’s and Women’s Track and Field and Cross Country Committee. The top four individuals in each region not on teams qualifying for NCAAs automatically advance to the meet, in addition to two at-large selections. Vanderbilt’s Sarah Tsai earned the second at-large selection after finishing sixth in the South Regional.

The 2016 NCAA Division I Men’s and Women’s Cross-Country Championships will be held November 19th in Terre Haute, Ind. Rome will look to repeat as an All-American after finishing 25th at the national meet last year.

Rome found out Saturday that she received an at-large berth in the national meet by the NCAA Division I Men’s and Women’s Track and Field and Cross Country Committee.

Entering the meet, the College was ranked second in the Southeast region and was projected to earn a trip to the NCAA championships for the fourth time in five years. But the Tribe struggled, finishing ninth out of 32 teams in the women’s 6,000-meter race with a score of 263 points. North Carolina State and Louisville punched their tickets to Terre Haute by placing first and second with 53 and 163 points, respectively.

In the men’s 10,000-meter race, the College finished eighth with 235 points to improve on its 11th place showing from last year. N.C. State won the regional title with a score of 90 points and Virginia finished runner-up with 105 points. Both advance to the NCAA championships.

In the men’s 10,000-meter race, the College finished eighth with 235 points to improve on its 11th place showing from last year.

Sophomore Ryan McGorty finished his season on a high note, leading the Tribe with his 35th place finish. A middle-distance specialist on the track, McGorty once again demonstrated his impressive range Friday with his 30:19 clocking. Senior Trevor Sleight capped off his collegiate cross-country career with a 37th place finish in a lifetime best of 30:22. Redshirt junior David Barney (30:30) and senior Faris Sakallah (30:50) finished in 45th and 57th, respectively. Freshman JP Trojan made the last race of his promising rookie campaign a good one, placing 61st in 30:56 to round out the scoring for the Tribe. Redshirt sophomore Dawson Connell (31:42) placed 100th and junior Chris Hoyle (31:44) finished in 104th to complete the varsity line-up.

Campbell’s duo of Amos Terer and Lawrence Kipkoech crossed the finish line together to finish 1-2 in the results and book individual tickets to NCAAs. Terer was credited with the victory in 28:48.7, while Kipkoech was clocked at 28:48.8.