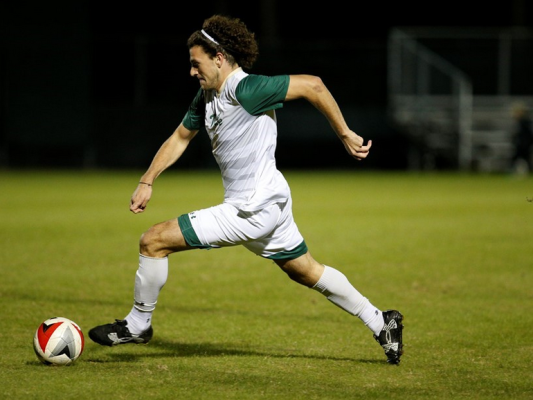 After winning its quarterfinal match last weekend at Elon, William and Mary headed to Hempstead, N.Y. for the Colonial Athletic Association semifinals and finals. The No.5-seed Tribe defeated No.1-seed and host Hofstra 3-1 Friday night to advance to the finals. Facing No. 2-seed Delaware in the championship Sunday afternoon, the College fell 2-1, ending the 2016 campaign.

The Tribe (12-7-2) had its best season since winning the CAA finals in 2013 by reaching the finals again on the momentum of a five-game winning streak dating back to Oct. 22. Going into Friday not having beaten the Pride (9-8-1) since 2013 as well, a big challenge presented itself.

Sophomore forward Antonio Bustamante continued to be a dynamic playmaker, scoring the first goal after finding the back of the net in the quarterfinal and senior day games. His goal came off a turnover caused by senior forward Reilly Maw, who was credited with the assist en route to a five-point night. With the score 1-0 after 12 minutes, the Pride and the College would trade possession but would not score again until the 63rd minute.

After 50 minutes without a goal, Maw scored his first of two goals for a 2-0 advantage. Hofstra found its lone goal off the foot of Pride forward Luke Brown in the 67th minute, but it wouldn’t stop the Tribe’s momentum. With five minutes left in regulation, Maw scored again after beating his defender for his sixth goal of the season. The goal established a 3-1 lead that would not be relinquished, giving the College a chance at the conference title.

“I’m very proud of the group tonight,” head coach Chris Norris said to Tribe Athletics. “We worked hard for each other and stuck to the plan. Hofstra is a very good team, but I thought we performed very well tonight.”

I’m very proud of the group tonight,” head coach Chris Norris said to Tribe Athletics. “We worked hard for each other and stuck to the plan. Hofstra is a very good team, but I thought we performed very well tonight.”

The Tribe outshout the Pride 17-14 (9-6 on goal), both teams doubling their shots after halftime. Despite Hofstra’s 10 corner kicks, the College defense and redshirt junior keeper Phil Breno held strong to allow only one goal.

Sunday’s match with the Blue Hens (12-7-1) was at a neutral site with the elimination of Hofstra. In the Tribe’s CAA kickoff during the regular season, it fell 2-1 in double overtime to Delaware. The result would repeat itself in the finals as a big first half gave the Blue Hens the edge and the trophy.

Maw found the back of the net in the 18th minute as he struck the ball so it flew over the Blue Hen keeper to score. Two minutes later, disaster struck as Delaware’s equalizer came from a Tribe own goal on a misfired header. With the momentum shift, the Blue Hens found another opening in the 28th minute for their second tally of the night. At 2-1 with more than an hour left, there would be no more scoring.

“Once again, I’m so proud of this group,” Norris said to Tribe Athletics. “They have been singularly focused on working to be the best they can be. Today, we fought hard and performed pretty well. However, sometimes against good teams, that still doesn’t get you the result you desire. Like we’ve done all year, we will learn from this as we try to get better.”

The Blue Hens outshot the Tribe 6-3 in the first half, though both teams fired six shots in the back half. Delaware held a tight 7-5 lead in shots on goal; Delaware saved four of those while the Tribe saved five.

Today, we fought hard and performed pretty well,” Norris said to Tribe Athletics. “However, sometimes against good teams, that still doesn’t get you the result you desire. Like we’ve done all year, we will learn from this as we try to get better.”

The loss ends the College’s season, as the team did not receive an at-large bid for the NCAA Men’s College Cup Monday afternoon. CAA Champion Delaware represents the conference in the tournament with a first round match at Providence.