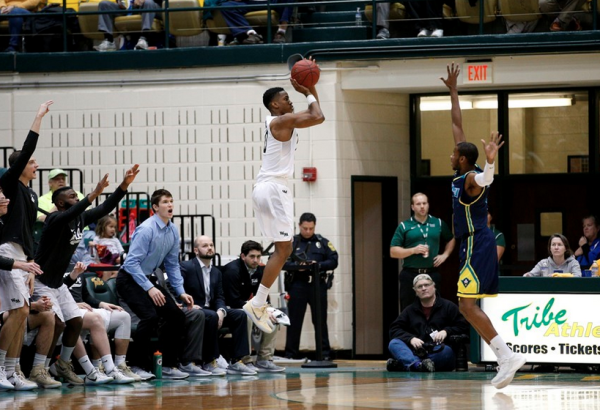 On the flipside, the Seahawks (20-3, 9-1 CAA) shot the ball poorly, going 28 for 79 from the field and 9 for 36 from three. UNC-Wilmington forward Devontae Cacok was one of the only bright spots for the Seahawks, putting up 21 points to go with 16 rebounds.

“You know, we beat a great basketball team tonight,” head coach Tony Shaver said. “It’s an old coaching cliché, I know, but it’s been said many times that you’re only as good as your seniors. Our seniors are really good right now.”

Against a team that was receiving votes for the Associated Press top-25 poll, the Tribe played its best game of the year, leading wire to wire.

The Tribe controlled the pace, getting into transition and outscoring the Seahawks 32-15 in fast break points. The home team was also able to get easy looks at the bucket, scoring exactly half of its 96 points in the paint.

“We got a lot of easy baskets in transition tonight,” Shaver said. “Our shot selection was a lot better tonight.”

Running the show for the Tribe most of the night was Cohn. He commanded the floor, finding open shooters for three-pointers or dishing for an easy layup. Cohn took care of the ball, not turning the ball over once against a team that pressed for the majority of the game.

“It just makes the game a lot easier when [Cohn] knows you so well and knows the spots you’re going to be in,” Dixon said. “It’s really easy when he’s playing.”

Both Dixon and Prewitt benefited from Cohn’s passing. The two combined for 55 points, the most between the two all season. Prewitt was 12 for 17 from the floor while hitting all three of his attempts from downtown. Meanwhile, Dixon went 9 for 17 but hit all eight of his free throw attempts.

Even though the Seahawks never led in the score, a win was not quite out of reach until late in the game. UNC-Wilmington had 15 offensive boards in the first half, outscoring the Tribe 11-2 on second chance points in the period. Early on in the second half, the Seahawks cut the lead to just five, 46-41. However, the Tribe embarked on a 17-2 run to put the game into a comfortable position.

The Tribe didn’t let UNC-Wilmington make another run for the rest of the game. Each Seahawks basket seemed to be met with a bucket by the College.

Despite giving up 78 points, the Tribe defense was impressive. While only forcing seven turnovers, it caused the Seahawks trouble when shooting the ball.

The Tribe got defensive contributions from freshman center Nathan Knight, who had four blocks, along with junior center Jack Whitman, who had two. Whitman played most of the game with a bloodied face, having been hit near the mouth early in the contest. He went on to score 11, while sophomore forward Paul Rowley added 10 off the bench.

Monday night, the Tribe will take on the Drexel Dragons in a makeup game from the originally scheduled for Jan 7. The game tips off at 7 p.m. at Kaplan Arena.