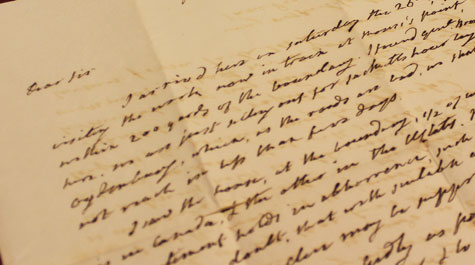 Feb. 11, an exhibit titled Written in Confidence: The Unpublished Letters of James Monroe will open at the Muscarelle Museum of Art. The Earl Gregg Swem Library acquired 25 unpublished letters written by and for James Monroe, containing an ongoing correspondence between Monroe and Monroe’s Secretary of the Treasury William Crawford.

Director of Special Collections Jay Gaidmore first heard about the letters’ existence from a historical documents dealer, Nathan Raab, who Gaidmore had previously done business with. Gaidmore said he was eager to acquire the letters because they were unpublished.

“We were able to negotiate a good price with him and set up payment over the next five years to make it much easier to purchase them,” Gaidmore said.

Instruction and Research Associate for Swem Special Collections Meghan Bryant M.A. ’12, Ph.D. ’16 was tasked with the transcription of the 25 letters. Bryant worked in collaboration with professors, historians and others to aid in her effort. She said that her biggest challenge was putting the letters in context in order to create a coherent narrative.

“Each of the letters is really a fragment from a series of letters that [Monroe and Crawford] were exchanging back and forth, and we don’t have each letter from each conversation,” Bryant said. “We have to present them in a way that is interesting and makes sense of these bits and pieces of conversations that were taking place.”

The exhibit will be in the print room at the Muscarelle. Designed to display art prints, the room is filled with waist-high glass display cases that will contain contextual information and relevant pieces of art in addition to 12 of the letters.

Bryant worked closely with Swem’s Warren E. Burger Collection Specialist and Coordinator Jennie Davy ’08, who was in charge of designing the exhibit.

“Some of the letters are in not great shape. It’s split in half,” Davy said. “So it’s a balancing act between making [the letters] accessible so that people can see [the exhibit] and can gain a new understanding of the subject matter by looking at it, but in a safe manner where we are still preserving it for future generations.”

The letters discuss a wide range of topics, focusing mostly on public business, including political appointments and issues of the day such as slavery, piracy and privateering, and the banking crisis.

However, the letters also show the personal relationship that existed between Monroe and Crawford.

Dan Preston, who helped prepare Monroe’s papers for publication, said that he sees the closeness of the two men in their correspondence.

“It’s an easy, casual relationship,” Preston said. “‘I was going to write you but my grandson was sick and I could not do it.’ And then they get on to the business.”

Preston cites this series of letters as just one example of Monroe’s reputation for working with those around him, even opponents, and being open to hearing all opinions.

“Monroe would rarely talk in the cabinet meetings,” Preston said. “He would sit and listen as the cabinet debated and discussed the various policies, asking questions occasionally.

Everyone understood that Monroe was a great listener. Whether he got along with somebody or not, he valued their opinion. He wanted to hear people’s thoughts, political opponents as well as his supporters and his friends.”

Davy also said that she recognizes Monroe’s affinity for those around him.

Monroe’s presidency from 1817-1825 was during a time of national and political growth, and he was unable to get to know every person that rose to power.

“What I find really interesting is Monroe’s reliance on other people,” Davy said. “As we’re going into a new presidency and we’re witnessing how these kind of decisions and appointments are being made and confirmed, it’s interesting to see how they were done 200 years ago.”

One of the two letters in the set not written by Monroe himself is a drafted letter Crawford wrote to be sent to Monroe.

The draft of this one letter contains many edits, showing that it was one of several drafts of the same correspondence.

“Many of the writers during that time wrote drafts of their letters before they actually sent them,” Bryant said. “I think that’s a really interesting point of comparison to now when we have Twitter and Facebook and we’re writing things all the time almost without thinking. Whereas they were really conscientious about making sure every word said exactly what they intended.”

The exhibit will run through May 14 and will be open to the public and free with a student ID.