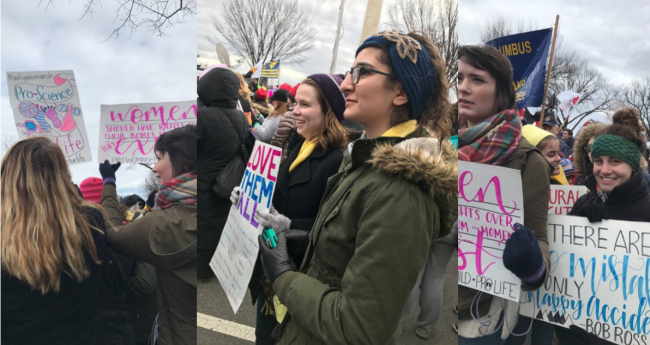 A week after an estimated 700,000 people gathered for the Women’s March on Washington, students from the College of William and Mary’s Students for Life traveled to Washington, D.C. for a different march — the annual March for Life.

During an average week in Students for Life, the group’s 15-20 active members write letters to state and federal representatives, volunteer with their Pregnant on Campus initiative and do volunteer work with Hope Pregnancy Care Center. This past week, students made signs as they prepared to join in the annual march of anti-abortion advocates.

One member, Rita McInerny ’19, who has been attending the March for Life since she was in the eighth grade, said she has continued to go because of the inclusion she sees in the movement.

I was awed by the realization that there truly is a place for everyone in the pro-life movement — it is inclusive of all men and women, at each and every stage of life,” McInerny said in a written response.

“I was awed by the realization that there truly is a place for everyone in the pro-life movement — it is inclusive of all men and women, at each and every stage of life,” McInerny said in a written response. “As I continued to attend the March for Life and the surrounding pro-life events year after year, it became even more apparent that the March for Life and the entirety of the pro-life movement provides a voice for the voiceless — the unborn, women, minorities, the abused, refugees, the elderly, the disabled, immigrants and all those who are unheard and vulnerable in our society. The pro-life movement is the movement for anyone who wants to be on the side of science, the vulnerable and the oppressed.”

This year’s March for Life occurred a week after President Donald Trump’s inauguration. During his first week in office, Trump signed an executive action to reinstate the “Mexico City Policy,” which denies US government funding to international non-governmental organizations that perform abortions.

Students for Life President Sam Malanga ’19 said that although she personally does not agree with many of Trump’s stances, she shares in the excitement following some of his recent anti-abortion actions.

“I don’t agree with most of Trump’s stances, except for his pro-life ones,” Malanga said. “People recognize that he isn’t pro-life after birth, like with immigration and prisoners. I think it’s hard for me because I don’t agree with the things that he says, but I am happy that there are certain things that are getting passed.”

For students like McInerny and Malanga, the March for Life is a positive event. Malanga said that while it does serve as a peaceful protest against Roe v. Wade, she thinks the overall atmosphere is “fun.”

McInerny echoed this, and said that she enjoys what she feels is an overall positive experience every time she goes to the March.

“Each year as I finish the march at the Supreme Court, I look behind me at the marchers who are still walking,” McInerny said. “The sea of happy faces holding signs declaring their belief in the beauty and value of each person, enthusiastically chanting and singing about their love for life never fails to inspire me with hope. One day, a society that values all of its members — from the beginning to the end of life — will be a reality. The pro-life movement demands that no matter who occupies the White House, that our country implements laws and policies that respect all life at every stage of development.”

Students for Life Vice President Grace Pluta ’19 said that for her, the March for Life advocates for more than the lives of the unborn.

“To me, pro-life encompasses the sustainability of the mother,” Pluta said. “Our group characterizes that broader sentiment … most of our posters encompassed that [life] past birth, like adoption, euthanasia, the mentally ill and homeless populations is important.”

Pluta and Malanga said that they agreed with the sentiment of other anti-abortion advocates in that they were disappointed that the Women’s March cut ties with anti-abortion leaders and organizations prior to the day of the event. While neither was able to go, they said they still would have if they could.

Malanga said that the excitement of the Women’s March made her feel ready for the March for Life.

[March for Life] is just as big of a crowd, it is kind of sad that we haven’t gotten the same amount of coverage,” Pluta said.

“[March for Life] is just as big of a crowd, it is kind of sad that we haven’t gotten the same amount of coverage,” Pluta said. “That’s not to say the Women’s March shouldn’t have gotten coverage, we are just such a large presence in D.C. for a whole day, and for 40-plus years we haven’t been given a voice when it is such a large demonstration that takes a lot of work. People fly in from all over the place for this.”

While members of Students for Life are so far pleased with abortion polices enacted by Trump, they said that they are not sure what to expect from Trump in the next few weeks — or even what they would hope to see.

However, a few months ago, she said Students for Life had a set agenda of bills they were lobbing against and in support of.

“Honestly right now everything is up in the air,” Pluta said. “I myself am very interested to see what happens and where we go from there. I don’t think anyone knows what’s really going to happen right now with these issues.”

For Malanga, the biggest takeaway from the March for Life is that it’s a peaceful protest.

“If they had no idea what the March was, I would want them to know that it’s been going on for 40-plus years,” Malanga said. “It’s a peaceful protest to protest Roe v. Wade, the Supreme Court case that legalized abortion. It’s a peaceful protest. It is very fun; I think that sometimes when you use the term ‘fun’ it has this connotation that diminishes the serious aspects of this march. What keeps people coming to the March is that they believe what they believe.”