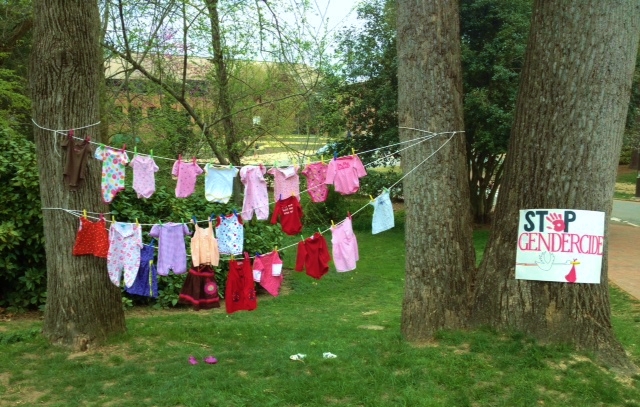 Pink onesies hung from a clothesline at the edge of the Sunken Garden Monday afternoon at the College of William and Mary. Students for Life constructed this display — which represented victims of infanticide and sex-selective abortion — as part of their Life Issues Awareness Week.

“China, right now, has its One-Child policy that was only supposed to last 30 years,” Maraist said. “It’s actually still ongoing. Basically, if you’re in a rural area and you have a girl, they’re not going to become the primary breadwinner for the family. The problem with [sex-selective abortion] is that the gender gap in China is huge, which will cause major problems in the future.”

In addition to tabling and distributing flyers around campus, SFL marked Life Issues Awareness Week with a visit from Virginia Delegate Brenda Pogge, R-96. Pogge did not speak specifically on sex-selective abortion in China; instead she addressed  pro-life legislation in Virginia. Life Issues Awareness Week Coordinator Zoey DiMauro ’14 explained SFL’s primary goal is to spread awareness of “gendercide” through this week’s events.

“SFL’s big focus right now is this week,” DiMauro said. “We have cupcakes with facts about gendercide in China on them. Babies are being killed because of their gender. That is wrong.”

Funds raised through Life Issues Awareness will be donated towards All Girls Allowed, a non-governmental organization that provides financial support to Chinese women who choose to give birth to more than one child despite external pressure to undergo abortions.

Program Director and Associate professor of Chinese studies Yangfang Tang noted abortion itself is a far less controversial subject in Chinese society than in American.

“China has a different culture, a different society and a different set of values,” Tang said. “From the Chinese [government’s] perspective, the population is so big, resources are so limited and you can’t have both. They have resource problems.”

China’s One-Child policy was introduced in 1978 in order to help the country cope with its resource scarcity problems. Despite its seemingly direct name, the policy allows rural families and families from ethnic minorities to have more than one child. Citizens who have too many children, however, are susceptible to stiff fines and career-damaging reprimands. Historically, many farming families have aborted female babies, as boys were perceived as more useful economic assets in agrarian society. Amnesty International USA’s Women’s Human Rights Coordination Group Co-Chair Tarah Demant expressed her organization’s concern over the long-term effects of sex-selective abortion across the globe.

“Amnesty International is deeply concerned that more than 60 million women are ‘missing’ from the world today as a result of sex-selective abortions and female infanticide, according to an estimate by Amartya Sen, the 1998 Nobel Laureate for Economics,” Demant said in an email. “China’s 2000 census revealed that the ratio of newborn girls to boys was 100:119. (The biological norm is 100:103.)”

Tang acknowledged China would face demographic issues going forward due to the influx of sex-selective abortions during the past few decades. She also expressed hope that a changing economy and rapid urbanization would cause preferential changes in Chinese society. Farming in China is swiftly being replaced with urban-based jobs, decreasing the emphasis on producing male heirs for plots of land.

“The people I interact with in China, they love girls,” Tang said. “There is a saying that boys are for someone else. Girls are for yourself.”

“China has developed really, really fast,” Clark said. “It was only decades ago that they were an agrarian society. It’s hard to relieve the cultural implications [of widespread sex-selective abortion] in a matter of years. At some point, it’s going to be a huge problem. You have a large population of men, young men, without any women. If you have one-child families, you’re not replacing anyone.”

Amnesty International operates under the UN’s Declaration of Human Rights. The organization has also created the “My Body, My Rights!” campaign, promoting sexual and reproductive rights for women around the globe. However, Clark noted the difficulties the advocacy group faces in addressing nuanced topics like sex-selective abortion in China.

“The government shouldn’t be allowed to force anyone to limit his or her choices,” Clark said. “If they want to have more kids, that choice should be up to them. Whether or not they choose negatively or positively isn’t our issue. You don’t petition a government for that. What you do is you educate the population. You tell them that [widespread sex-selective abortion] will lead to problems, but if people still come to [personal] decisions, then that’s okay.”