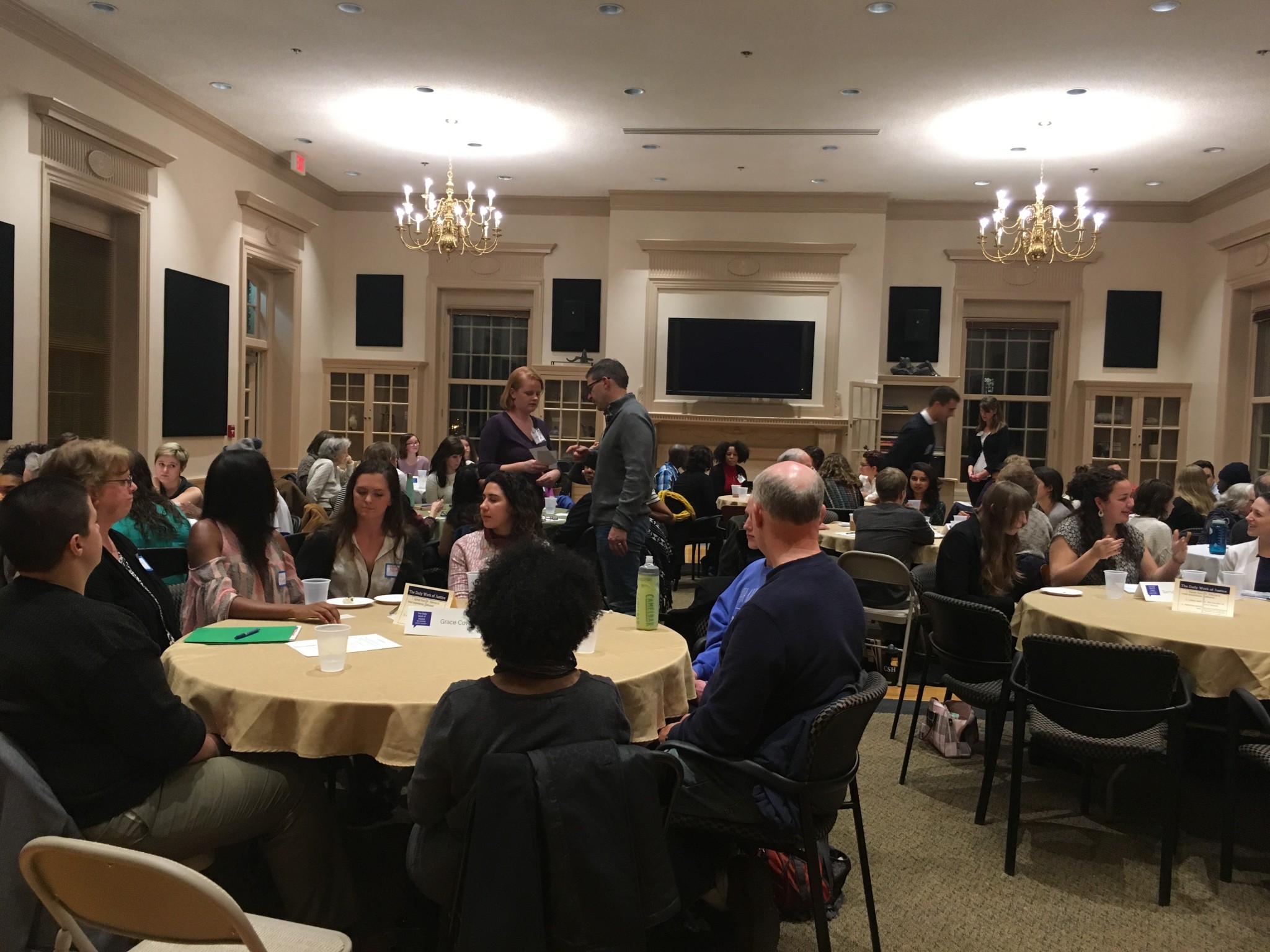 “Its focus is really to provide an opportunity to develop skills to address social justice issues within our own community,” Director of the Counseling Center Warrenetta Mann said. “We want to begin to engage with the issue.”

The event, held on Feb. 2, was set up with one or two speakers at each table as well as five or six community members and a conversation facilitator. The speakers came from a variety of backgrounds. Some had been previously incarcerated for offenses such as robbery or possession of marijuana while others had family members who had been incarcerated. Also in attendance were other community members who work to help people transition out of incarceration, including a paralegal.

“We were very intentional to create a format of intimate conversations with the focus being people’s lived experience,” Mann said. “It’s important for us to be informed about whatever social justice issue that we intend to engage with.”

“I personally am privileged enough to have never been part of that community but at the same time as a woman of color I feel like it’s kind of my obligation to be here and fight to empower those who are most vulnerable in our communities,” Nairuti Shastry ’17 said.

Attendee Shweta Kumar ’17 plans to apply to law school and is interested in specializing in drug rehabilitation within prisons.

“I went on a Branch Out Alternative Break two years ago … and we visited a rehabilitation center and something they used was a 12 step program, like for alcoholism, and there’s a lot of criticisms about that program,” Kumar said. “There’s very little evidence that it works and I’m interested in more evidence and other ways to treat addiction and learning about how to help someone break out themselves.”

Seated at a table were Assistant Director of the Office of Community Engagement Elizabeth Miller ’11, Diane Mims Langhorst ’68 and David Benedict.

Benedict is a founding member of both the Greater Williamsburg Outreach Mission to the homeless and the Williamsburg Walk the Talk program, an organization dedicated to helping people leave the Virginia Peninsula Regional Jail. He has been working with inmates at the jail for 14 years.

Langhorst brought her experience working with incarcerated women to the conversation. She is currently involved with both Williamsburg Walk the Talk and the SpiritWorks Foundation Center for the Soul, an organization whose mission is to help those affected by addiction.

Benedict discussed with the table how he had seen youth leave the prison system without transportation, food or jobs.

While working with an incarcerated youth, Benedict said he does his best to offer them a wholesome way to reenter the community.

Langhorst said that she believes the women she works with are resilient and that the sincerer she is with them, the more they will be able to connect with her. She said her experiences have taught her how to be direct and straightforward with people and that she tries to teach women to be resourceful rather than manipulative.

Attendees at the table were drawn to the event by their personal experiences with the criminal justice system and what they saw others endure.

Benedict argued that the probationary system keeps people tied into it. He said that the threat of reincarceration that the system holds makes people continue paying for their crimes even after release.

Samuel Biddle ’17, an attendee whose father is a public defender agreed, saying that many people are still metaphorically incarcerated after being released.

Another topic the table discussed was the issues prisons have with handling those with mental illnesses. Attendees discussed the lack of medical care in prisons and the high rates of illness and infection.

According to Penal Reform International, tuberculosis rates are 10 to 100 times higher in prisons than in outside communities due to overcrowding and poor nutrition. The rate of HIV/AIDS is much higher in prisons as well.

At the end of the event, each attendee came up with one word to capture how they felt about the conversation. One table came up with these eight words: mindful, connected, humble, energized, enlightening, present, engaging and integration.