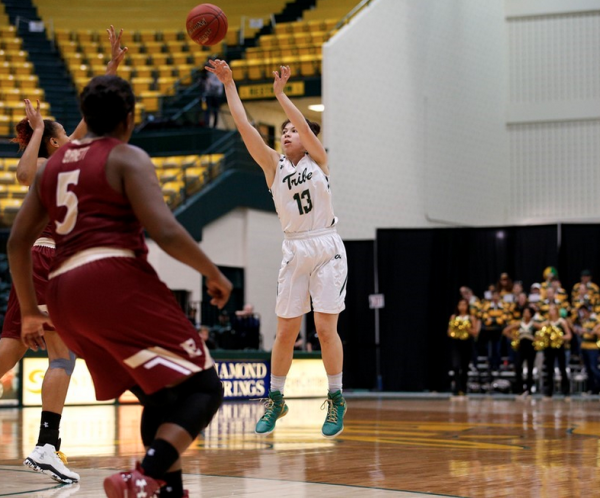 The College dominated the opening period, ending up with a 31-8 lead after a 19-2 run from the start and a 14-point run following a shot by Northeastern’s Gabby Giacone. Senior guard Marlena Tremba was on fire, scoring eight in the quarter. Senior guard Latrice Hunter added six points off the bench in the period.

The Tribe led the Huskies 38-7 in the second quarter, the largest lead of the half. The College continued to control the game throughout the second and third quarters, with Northeastern unable to mount any serious run to cut into the deficit. The largest lead of the night was 63-35 at the beginning of the fourth quarter, with the College up 28 points. The Tribe scored 28 points in the paint and 20 points off turnovers, all while winning the rebounding battle 40-36. Northeastern tried to come back with a 12-0 run in the last three minutes of the game, but it was too little, too late as the Tribe held on to win comfortably, 68-54.

Tremba scored a team-high 17 points Friday night against Northeastern, shooting 5-of-10 from behind the arc and stuffing the stat sheet with five assists, two rebounds and a steal. Senior forward Alexandra Masaquel secured her sixth double-double of the season with 10 points and 12 rebounds to go along with a block and a steal. Hunter, junior center Abby Rendle and sophomore guard Bianca Boggs each scored eight points. Hunter scored her eight points in just 13 minutes of play.

Sunday, the College lost a tight road game against Hofstra 64-61 after allowing the hosts to come back from 13 down in the fourth quarter. The Tribe held a slim lead for the duration of the first half. In the third quarter, the College asserted itself to take a 50-39 lead entering the fourth. However, the Tribe defense allowed a whopping 25 points from Hofstra in the final period while managing just 11 points itself, leading to a 64-61 final scoreline.

Pride turnovers accounted for 18 of the Tribe’s points Sunday afternoon. Rendle’s three blocks brought her up to 201 career blocks and earned her the honor of being the second player in Tribe history to top more than 200 blocks and the eighth player in CAA play to achieve this honor. As a junior, Rendle is just 55 blocks away from the College’s all-time record.

The Tribe will take on Hofstra again tomorrow at Kaplan Arena at 7 p.m.