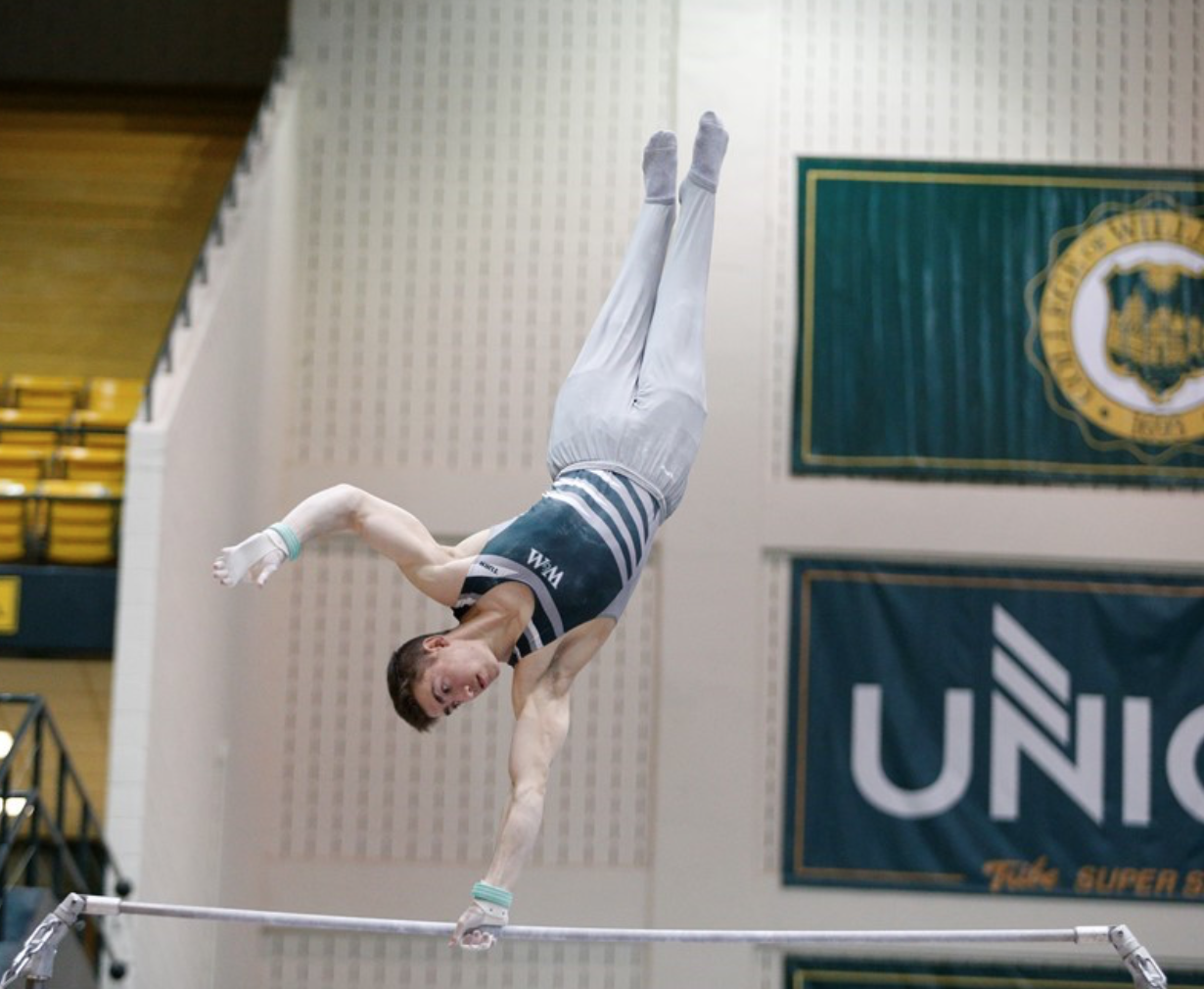 Floor was the only event not led by the Tribe, although freshman Tim O’Neill took second with a career-best 13.8 points and helped the Tribe to a season-high 67.1 points in the event. O’Neill also took first on vault with 14.3 points.

The Tribe in the vault and pommel horse to secure the victory. O’Neill’s win on vault was followed by junior Juan Palma in second with 14.2 points and senior Nick Van Dyke in third with 14.0, helping the Tribe to a season-high of 69.8.

Gliozzi’s pommel horse win, along with Meyer’s second-place finish of 13.25 points and junior Griffin Antle’s third-place finish with 12.4 points, helped the Tribe to an impressive 62.2 point showing in that event.

In addition to Meyer’s win on rings, junior Jeremiah McReynolds and sophomore Peter Makey tied for third with matching 13.5 scores. McReynolds also tied for third on parallel bars with freshman Tomas Palma, scoring 13.35 points toward the Tribe’s total of 66.55.

The men continue their season with a tri-meet against Springfield and Army at Army Feb. 25.

The Tribe women finished in fourth place at a quad-meet hosted by with a season-high score of 193.025.

Freshman Caroline Caponi stood out in this meet, taking second in the all-around with 38.925 points, as well as helping the Tribe to a 48.700 score on bars with a career-best 9.850 points, which tied for third place. Freshmen Erika Marr and Taylor White also helped the Tribe to this season-high with their matching career-bests of 9.725 points.

The Tribe also scored a season-high 48.550 points on floor with the help of Caponi, who scored a career-best 9.775 and tied for 10th, along with sophomore Aaliyah Kerr and senior Olivia O’Connor, who both scored 9.750 points. O’Connor additionally took fourth in the all-around, scoring 38.400 points.

Marr and sophomore Madison Dwyer both posted career-bests on vault, with Marr placing eighth at 9.725 points and Dwyer scoring 9.675 points. The Tribe’s score for vault was 48.100.

The women compete again Friday at a five-team meet hosted by George Washington.