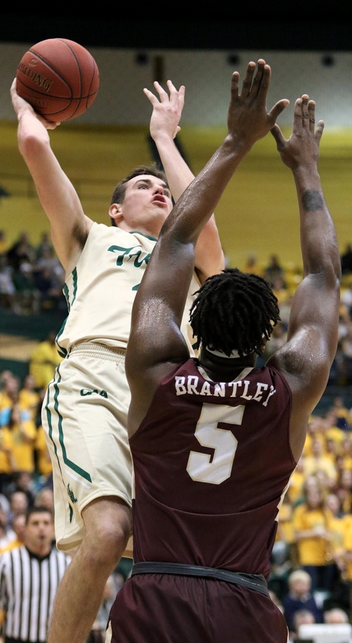 William and Mary fell flat in yet another road contest Thursday, getting blown out 79-61 to perennial Colonial Athletic Association bottom-feeder Drexel. The Dragons (9-17, 3-10 CAA) stormed out of the gate, blitzing to an 11-0 lead in under three minutes while the Tribe (13-11, 7-6 CAA) did virtually nothing but watch.

Guard Kari Jonsson led the early charge for Drexel, scoring eight of the first 11 and 16 in the first half. Throughout the first half, the lead grew tremendously for the Dragons. A 12-point lead with 15 minutes left in the half grew to a whopping 30-8 advantage with 10 minutes until the break.

A quick 7-0 Tribe run put the game back into contention, beginning with a layup from senior guard Daniel Dixon. Senior forward Omar Prewitt, who was the College’s most consistent player on the night, keyed the run with a steal, a three and a fast break jam. After the teams traded baskets for several minutes, the margin remained at a 15-point deficit, 41-26, with just under three minutes remaining in the first half.

The Tribe put itself in position to make a comeback in the final minutes of the first half. Junior center Jack Whitman, who came off the bench for the first time this season, scored four straight, followed by a big three from Dixon and a crafty basket from junior guard David Cohn in the final seconds of the half. This cut the Dragons’ lead to just 45-35 entering the break.

The College had, by all accounts, a dismal shooting night, finishing just four of 20 from beyond the arc and 13 of 23 at the foul line.

In the second half, the Tribe was again faced with a quick Drexel start. The Dragons rattled off a 15-6 run to take a massive 60-41 advantage midway through the second half. The run was aided in large part by three Tribe turnovers.

Seemingly deflated, the Tribe never again got within 16, allowing the Drexel lead to balloon as large as 24 with four minutes remaining.

In its defeat, the Tribe was led by Prewitt, who finished with 17 points on seven of 13 shooting from the field. Whitman added 14 off the bench, and Dixon and freshman center Nathan Knight rounded out the Tribe quartet in double figures with 10 apiece.

The College had, by all accounts, a dismal shooting night, finishing just four of 20 from beyond the arc and 13 of 23 at the foul line. The Tribe also turned the ball over 13 times, compared to just seven for Drexel. The Dragons also won the rebounding battle 39-32 and the points off turnover battle at 23-8. All five starters scored in double figures in a romp that featured a Drexel advantage in nearly every statistical category.

The Tribe returned home to top the College of Charleston 89-79 Saturday. The final road trip of the season kicks off Thursday when the College travels to face James Madison at 7 p.m. The road trip continues with a Saturday night matchup against Delaware at 7 p.m.