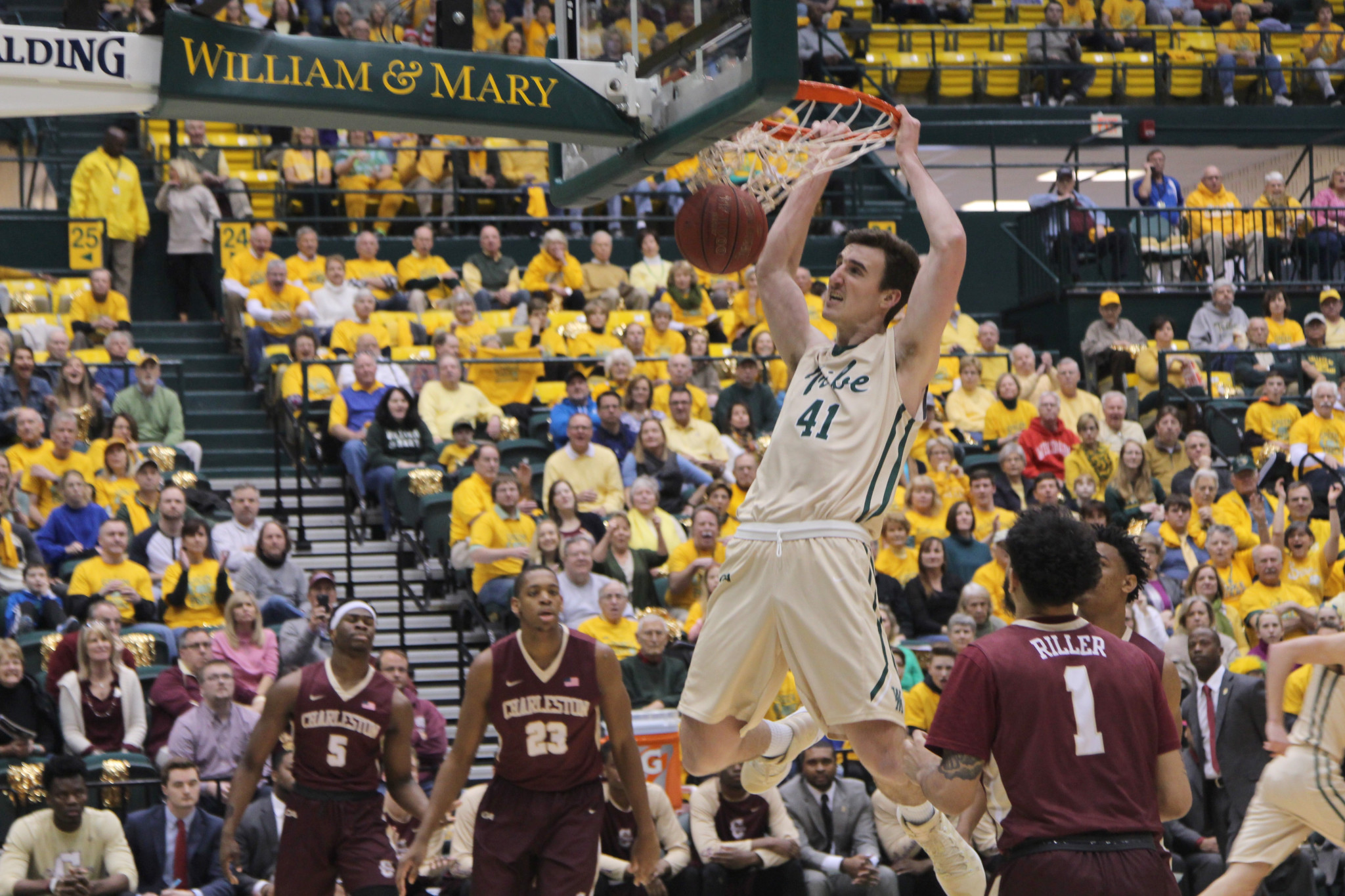 Saturday afternoon, William and Mary took on the College of Charleston in the annual Gold Rush game in Kaplan Arena. The Tribe, roused by an electric crowd, started quick and held on to defeat the Cougars 89-79. This upset of the No. 2 team in the Colonial Athletic Association marked an important conference win for the Tribe.

The College (14-11, 8-6 CAA) started out strong with a good layup by junior center Jack Whitman in the opening minute. The Cougars (19-8, 10-4 CAA) followed up with their own two-pointer before the Tribe took the lead and kept it for the remainder of the game.

Four players for the College ended in the double digits. By the end of the first half, two players were already in double figures. Junior guard Greg Malinowski led Tribe scoring at the end of the first half with 16 points, trailed by senior forward Omar Prewitt with 14. Prewitt went on to lead in overall scoring, finishing the game with a season high of 30 points. Malinowski followed with 16, while freshman forward Nathan Knight tied his career high with 15 and senior guard Daniel Dixon added 14.

“It’s an old coaching cliche, but we defended and our offense was a positive result of that,” Head Coach Tony Shaver said. “When we do that, everything flows for us.”

Prewitt, in addition to 30 points, added seven rebounds, three assists and two steals. Knight contributed six rebounds and was successful on all five of his free throw attempts, an impressive feat for the freshman. Whitman led with three blocks, followed by sophomore forward Paul Rowley with two. There were only 14 turnovers in the game, seven on each side.

“I’m just taking it one day at a time,” Knight said. “Focusing on what’s happening today, whether it’s a game or practice, not thinking about what’s going to happen next year, just focusing on how I play today and how I want to impact my team and how I want to make my team better today.”

The Tribe ignited the crowd in the second half with a series of four dunks in two minutes. Knight hammered home two of his own, followed by one apiece from Prewitt and Whitman.

It’s an old coaching cliche, but we defended and our offense was a positive result of that,” Head Coach Tony Shaver said.

The Tribe’s largest lead was 17 in the second half after two Dixon free throws made it 54-37 just moments into the second half. Impressively, the Tribe lead never dipped below seven points.

“I don’t really know what it is that makes us play so well at home,” Prewitt said. “Whatever it is, we really need to figure out what it is because we have to take that on the road with us.”

Charleston closed the gap to 54-45 in the second half with an eight-point run by Nick Harris, soon followed by a five-point run by Grant Riller. The Tribe responded with seven straight points courtesy of Knight, Dixon and junior guard David Cohn.

Junior guard Connor Burchfield offered solid minutes off the bench in the second half, knocking down a three that pushed the College’s lead to 15 with just under six minutes remaining.

The Tribe scored nine points off timeouts, 13 fast break points and 18 points off the bench for the game, all of which contributed to an impressive 89 points scored against one of the top defenses in the CAA.

I don’t really know what it is that makes us play so well at home,” Prewitt said. “Whatever it is, we really need to figure out what it is because we have to take that on the road with us.”

This win continues the Tribe’s undefeated streak at home, upping the record to 12-0. While the College may be undefeated at home, its away record is 2-11.

Shaver expressed his feelings about the team’s phenomenal home record versus its lacking success on the road.

“Have you ever gone to a full day of classes and William at Mary?” Shaver said. “A five, six or seven-hour bus ride to your location, practiced that night, got in a hotel room about 10:30 at night and played the next day in a gym you’ve never really been in? It’s just different on the road.”

The Tribe will hit the road for the final time this weekend in the final attempt to better its away record in the regular season. It will take on James Madison Feb. 16 at 7 p.m. and Delaware Feb. 18 at 7 p.m.

2/17/2017 12:28 p.m. An earlier version of this article incorrectly said that the Tribe was undefeated on the road. The College is actually undefeated at home with a 2-11 away record.