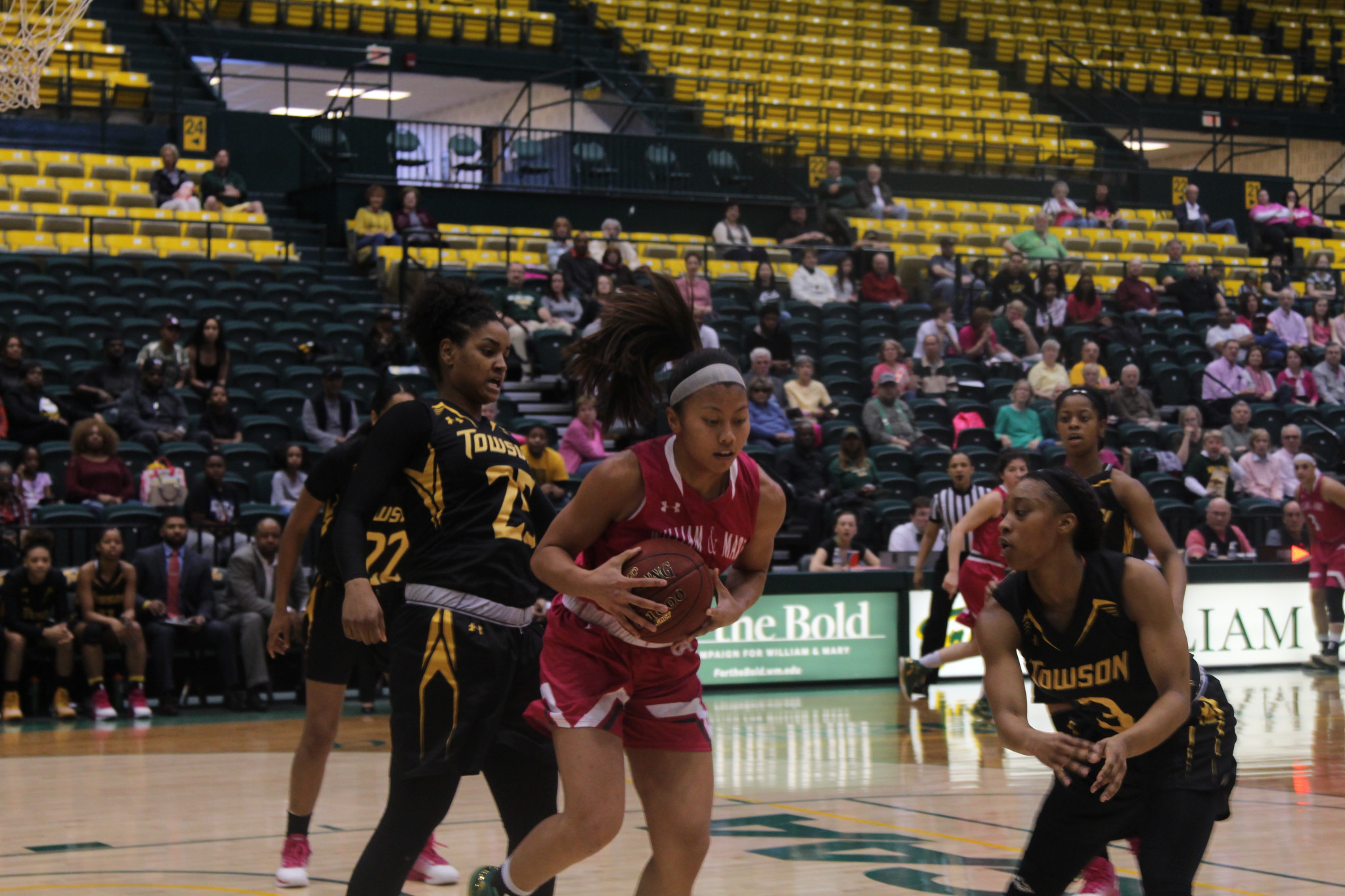 Friday night, William and Mary traveled to Philadelphia to take on Drexel. The Tribe was unable to overcome a slow start, falling 65-48. A 16-4 run to end the first quarter gave the Dragons (18-6, 9-4 CAA) a comfortable lead that they did not relinquish. Junior center Abby Rendle and sophomore guard Bianca Boggs each had 11 points for the Tribe, while senior guard Marlena Tremba had seven points and senior forward Alexandra Masaquel added six points.

After the road setback, the Tribe returned home to Kaplan Arena to take on Towson Sunday afternoon. The College grabbed the lead quickly and never looked back, leading wire to wire in a 68-55 victory. The Tribe (16-8, 6-7 CAA) used timely baskets and balanced scoring to tame the Tigers (11-13, 4-9 CAA) and keep control of what was a single-digit points margin for most of the game.

“That was a struggle; it was a hard-fought game,” head coach Ed Swanson said. “I thought our kids showed a lot of character a lot of times during the game, especially in the first half.”

The Tribe featured a balanced scoring attack, with three players finishing in double digits. Tremba led the team in scoring with 17 points, while Rendle and junior guard Jenna Green pitched in with 13 and 11, respectively. Boggs had nine points and nine rebounds and Masaquel had eight points.

“We really spread the ball and share the ball a great deal,” Swanson said. “We had 18 assists, which is kind of low for us, but I thought we executed terrifically in that fourth quarter.”

The Tribe started fast, with Green scoring the first five points of the game. Late in the first quarter, the College took a seven-point lead. Towson kept it tight, closing to within one on multiple occasions, including the end of the first quarter. The Tribe would extend the lead back out to six on several occasions, but Towson responded every time.

At the half, the Tribe led 31-30 despite shooting just 34.6 percent from the field. However, the College forced 12 Tiger turnovers in the half, helping to offset limited offensive production.

We really spread the ball and share the ball a great deal,” Swanson said. “We had 18 assists, which is kind of low for us, but I thought we executed terrifically in that fourth quarter.”

Coming out of the break, the Tribe took another six-point lead with Boggs and Rendle leading the charge. However, by the end of the period, Towson had closed to within one yet again.

In the fourth quarter, the Tribe would pull away. Masaquel and Tremba each had seven points in the period to fuel a 15-4 run. That spurt would put the game away for the Tribe, who cruised to the finish line for the comfortable victory.

I think we definitely rose to the challenge,” Green said. “We need more people to do that in more games coming up. I think, definitely, one through 15 stepped up today.”

The game was slow-paced, with a total of 53 fouls called and 62 free throws. Three Towson players fouled out, and multiple Tribe players were in foul trouble throughout the game.

“We were not in a great offensive rhythm, but the second half, I really thought our conditioning took hold,” Swanson said.

The Tribe were missing two players due to illness. Tremba played all 40 minutes in the game and Green played 37.

“I think we definitely rose to the challenge,” Green said. “We need more people to do that in more games coming up. I think, definitely, one through 15 stepped up today.”

Friday, the Tribe takes on Charleston in Williamsburg with a chance to pull back to .500 in Colonial Athletic Association play. In the last meeting between the two teams, the Cougars beat the Tribe 60-50. The game will be at 7 p.m. in Kaplan Arena.