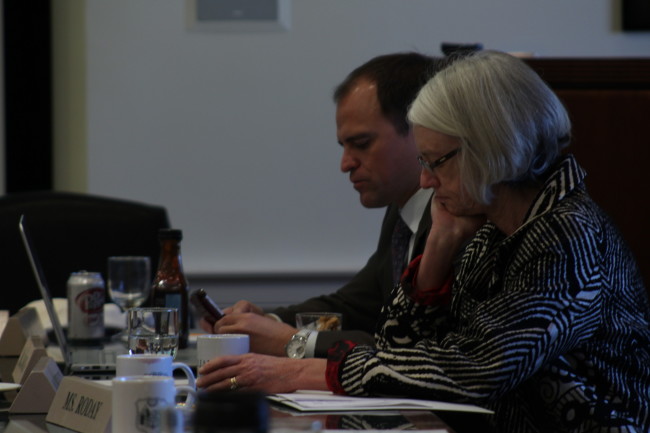 At the Academic Affairs Committee meeting of the College of William and Mary Board of Visitors Thursday, Feb. 9, administrators discussed a rejuvenation of the undergraduate applicant pool size after falling by four percent for the Class of 2020.

“Applications to the undergraduate program — you will recall that last year they were lower than previous year, dropped about four percent, and whenever that happens you wonder, is this a trend, or is this just a little blip? Well I believe according to this year, it was just a little blip,” Halleran said.

The applicant pool hasn’t recovered completely; the previous record for the Class of 2019 of 14,952 applicants has not yet been matched.

Associate Provost for Enrollment and Dean of Admission Tim Wolfe said that it is difficult to isolate specific reasons for the previous year’s transitory drop, but he partially attributed it to an overall fall in high school graduation rates.

With that said, the most likely reason is that after a decade of consistent growth in our applicant pool, some leveling off was eventually to be expected,” Wolfe said in an email.

“With that said, the most likely reason is that after a decade of consistent growth in our applicant pool, some leveling off was eventually to be expected,” Wolfe said in an email. “Since the beginning of this decade, many regions of the country have experienced declining numbers of high school graduates—a trend that is only now leveling off. Many universities, like W&M, experienced at least one year where applications dropped during this time.”

The primary source of fluctuation has been in out-of-state applications, according to Wolfe.

“It was also not surprising to see that the drop occurred entirely among out-of-state students given the current gap in our available need-based financial aid for out-of-state students,” Wolfe said. “This is one reason why raising money for scholarships is a top priority in the For the Bold campaign.”

In recruiting the Class of 2021, Wolfe said that the admissions committee sought to expand several different electronic and print campaigns, in addition to increasing the number of students in communication with the College.

For the future, Wolfe said it is difficult to predict the exact pool size but noted that despite the dip and recovery in applications, the quality of applicants has remained strong.