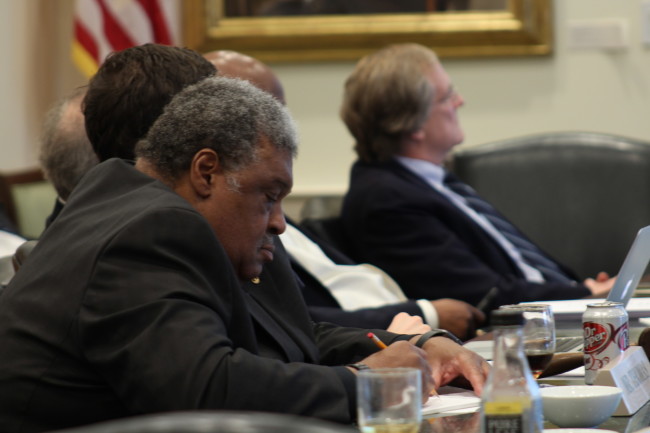 Our slogan is ‘Building on the Legacy’ because we must understand the past in order to move forward and build a better future,” Mclendon said.

“Our slogan is ‘Building on the Legacy’ because we must understand the past in order to move forward and build a better future,” Mclendon said. “This year is about the anniversary of William and Mary’s desegregation, but these three women are at the center of it all.”

The steering committee in charge of planning the anniversary is preparing events to commemorate these women and the achievements of many other African-Americans who have attended the College.

Among these events is a mural project which will involve an African-American artist leading a class of 10 students in creating a mural to hang in the President’s Collection of Art. The Marshall-Wythe School of Law will honor Edward Travis ’54, the first African-American alumnus of the College, with a new bronze plaque and a portrait.

There will be an exhibition at the Muscarelle Museum of Art commemorating work by African-Americans at the College and Colonial Williamsburg will be reenacting the moment of the three women arriving at the College. The Steering Committee is also hosting a Legacy Weekend from April 12-14 which will consist of story-tellers, student group performances, an opera and an awards ceremony.

The Alumni Association also announced that Briley, Ely and Strafer will be the Grand Marshalls for the Fall 2017 homecoming parade. Additionally, these three women will be given a brick at the Alumni House to commemorate their accomplishments.

“These three women would like a brick at the alumni house and I have made that promise to them,” McIendon said. “It’s the very least we can give to those who have given and continue to give so much.”

Valerie Cushman, Director of Alumni Initiatives for the William and Mary Alumni Association, discussed plans for the 100th anniversary of co-education at the College during the 2018-19 academic year.

According to Cushman, the Earl Gregg Swem Library is looking to add a position for an oral historian to document the lives of both African-American and female alumnae. The anniversary of co-education has been allocated a budget of $273,000 and will also be given money from pre-existing budgets in numerous departments.

During the anniversary, the College intends to shape a variety of new COLL 300 classes around themes that relate to women and gender in society. It also intends to partner with the Muscarelle to host an exhibit honoring female alumni and to host a student media competition.

The Steering Committee is also in the process of getting a resolution passed by the Virginia General Assembly and a proclamation from the Virginia Governor Terry McAuliffe commemorating the anniversary. It would like to offer new scholarships to African-American students and to create a physical memorial of the anniversary, possibly in the form of a garden or a waterfall.

The Committee is also planning a fundraising initiative entitled “Leading Women Philanthropists.” This initiative consists of 100 female alumnae donating $10,000 each to the College. While the original goal was to achieve 100 female donors, Cushman said that they have received interest that far exceeds their original goal.

The anniversary will also include a Women Alumnus Summit from September 20-23. The Summit will include a ceremony in Kaplan Arena, but the speaker is still undetermined. The Committee is also planning to launch an exhibit in the Sadler Center during the fall of 2018 to commemorate female alumnae and is seeking nominations for women to be featured.

It is our hope that this feels like the year of the woman and no matter what building you walk into you will see a presence of accomplished William and Mary women in the building,” Cushman said.

“It is our hope that this feels like the year of the woman and no matter what building you walk into you will see a presence of accomplished William and Mary women in the building,” Cushman said.