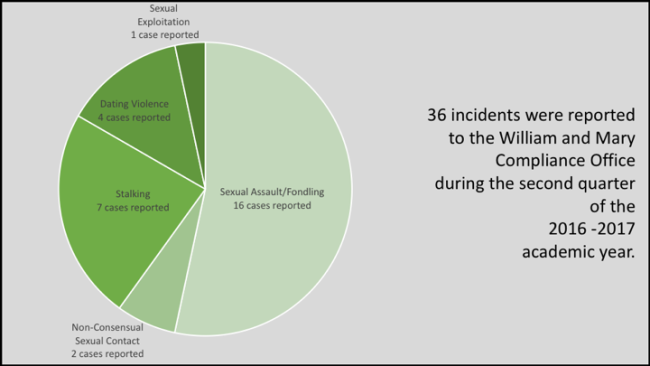 During Thursday morning’s Board of Visitors Audit and Compliance committee meeting, Chief Compliance Officer Kiersten Boyce updated members of the Board on Title IX data for the second quarter of the 2016-17 academic year. According to Boyce, reported incidents have increased, but not in a way that surprised her.

[These incidents] have increased in the second quarter, but that’s because in July and August the activity here is a lot quieter,” Boyce said.

“[These incidents] have increased in the second quarter, but that’s because in July and August the activity here is a lot quieter,” Boyce said. “I wasn’t surprised to see an increase.”

Boyce said that in the second quarter, her office received 36 total reports of crimes listed in the Violence Against Women Act. These crimes broke down into 16 reports of sexual assault/fondling, two reports of non-consensual sexual contact, seven reports of stalking, four reports of dating violence and one report of sexual exploitation.

Additionally, while Boyce said she didn’t have data to compare year-over-year, she anticipated a slight increase in this academic year’s total reported incidents. Last year, the compliance office received 80 reports.

Out of these 36 reports, 11 were investigated under the College of William and Mary’s investigative proceedings including three athletics-related reports. 18 incidents were considered non-actionable, which means that they were either reported anonymously, had unknown respondents, lacked response from the victim or did not fall under the College’s jurisdiction. The College took remedial action — such as developing a no-contact order or creating a safety plan — for the other seven reported incidents.

Out of the 11 incidents investigated, four were referred to the Commonwealth Attorney’s office and in one of those, an arrest has been made.

Boyce said that this breakdown of responses to incidents was not different than what she had expected.

“One thing that we’ve considered is maybe making a new reporting interface through the current system,” Boyce said. “There’s a lot of options and a lot of information about what’s confidential and what’s an anonymous. An improvement that will highlight that may be helpful.”

Vice Chair of the Audit and Compliance Committee and BOV member Christopher Little said that he was unsure if students who wanted action to be taken knew that reporting anonymously could make it hard for administrators to follow up.

In response, Boyce said that the reporting system includes options for students to report what action they wanted to be taken and that if students were to fill out a form with conflicting information, there is a way for administrators to get back in touch with them and follow up.

BOV member DeRonda Short asked what had happened to the four incidents that had been referred to the Commonwealth Attorney’s office. When Boyce told her that three of the cases had not been pursued because the victims hadn’t wanted to pursue criminal investigations, Short questioned how out of 36 reports, just one had resulted in an arrest.

So what it looks like, is that of the 36, there is only one with criminal action,” Short said. “How did that happen?”

“So what it looks like, is that of the 36, there is only one with criminal action,” Short said. “How did that happen?”

Short also asked questions about the seven reported incidences of stalking, particularly about how none of the seven resulted in criminal investigations.

Boyce said that she would be able to discuss more details of these cases in closed session and that there were two other incidents that had criminal involvement.