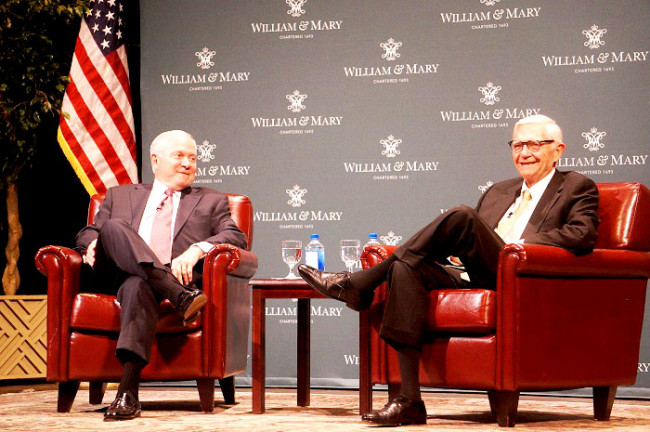 Following the election of U.S. President Donald Trump, former U.S. Secretary of Defense and Chancellor of the College of William and Mary Robert Gates ’65 sat down with College President Taylor Reveley to discuss the state of the nation and give policy prescriptions for current foreign policy issues.

“We have one of the most experienced people in national affairs,” Reveley said. “One of his most delightful characteristics is that he says something when you ask him a question.”

Reveley asked Gates to discuss his opinions, focusing on issues relating to November’s presidential election, Trump’s Cabinet appointments and issues of foreign policy. Afterwards, there was time allotted for audience members to ask him questions.

Relating to the election, Reveley asked Gates if he saw any useful lessons that the general public could learn from the election. Gates said that this past election was a great reminder that not enough “moderate” voters show up at the polls during the primaries.

I have a sense that a lot of Americans said ‘How did we end up with this choice?’ and it’s because none of you showed up in February and March,” Gates said.

“I have a sense that a lot of Americans said ‘How did we end up with this choice?’ and it’s because none of you showed up in February and March,” Gates said. “The election is so polarized because moderates only show up in November … The founding fathers were amazingly prescient of the failings of mankind, but they didn’t anticipate career politicians.”

Another topic of discussion was President of the Russian Federation Vladimir Putin, his alleged involvement in the U.S. presidential election and the appointment of U.S. Secretary of State Rex Tillerson.

Gates said that he thought Putin was a “stone-cold killer” who acted the way he did because Russia’s borders have increasingly tightened to where they were at the time of Russian monarch Catherine the Great.

According to Gates, Putin’s goals are to reassert Russia’s role as a great power and to create a buffer of frozen conflicts or friendly states around Russia. He recommended that the United States consider arming Ukraine or showing force.

Gates also said that he thought Tillerson was the right choice for secretary of state and that he had personally recommended him for the position.

During his confirmation hearings, some questioned the former CEO of ExxonMobil’s ties to Putin.

“I know he was very controversial, I suggested him,” Gates said. “Rex is an American, a boy scout to his marrow. Once he was confirmed, it’s going to be all about America.”

Some students, like Vanessa Adkins ’19, disagreed with Gates’ support for Tillerson.

I didn’t agree with him suggesting Tillerson and how he basically implied that his patriotism was a reason enough to suggest him even though he wasn’t qualified,” Adkins said.

“I didn’t agree with him suggesting Tillerson and how he basically implied that his patriotism was a reason enough to suggest him even though he wasn’t qualified,” Adkins said.

Moving farther into discussions of foreign policy, Reveley asked Gates about what the United States should choose as a productive response to China.

Gates said that he believes Trump has exaggerated the nature of the threat posed by China, and that he still believes that the United States should pursue a more aggressive policy without offending NATO allies.

“We can’t be chickening out over rights,” Gates said. “To assert our rights, we must be prepared for conflict.”

When the audience began to ask questions, Gates gave answers regarding topics such as what lessons the United States should have learned from conflict in Afghanistan, how to deal with the ripple effects of conflict in Iran and what the nation should expect after the confirmation of U.S. Secretary of Education Betsy Devos.

“Everyone needs to take a deep breath,” Gates said. “Those people will be held accountable for their actions. [DeVos] will do her thing and she has very little power.”

After this response, Reveley decided that “taking a deep breath” would be a good note to end the conversation on, and said that Gates would be taking no more student questions.