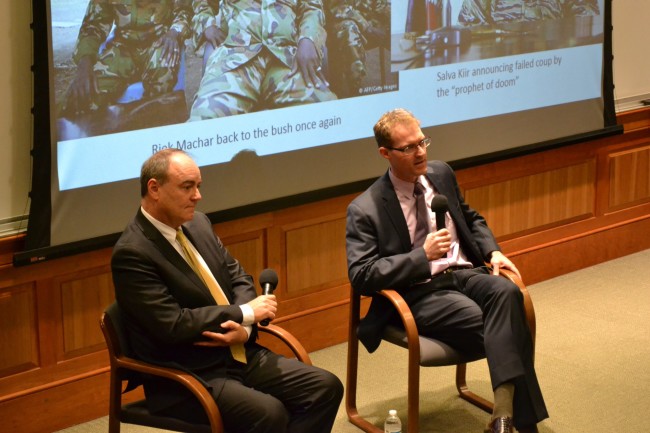 And the next thing I know, everyone in the village grabs the belongings they have, and they say ‘let’s go,’ and we start to run — literally running — and we run for forty-five minutes,” Roessler said.

“And the next thing I know, everyone in the village grabs the belongings they have, and they say ‘let’s go,’ and we start to run — literally running — and we run for forty-five minutes,” Roessler said.

Roessler was trapped in the summer of 2002, escaping armed conflict during the Second Sudanese Civil War.

He described his experience during a book talk sponsored by the College of William and Mary’s Institute for the Theory and Practice of International Relations. The talk focused on Roessler’s extensive research in African states such as Kenya, Congo, Sudan and Syria.

His research developed models for states caught in a coup-civil war trap and documented how allies in the Congo betrayed one another in the aftermath of their revolution. Last year, he published his work in two books: “Ethnic Politics and State Power in Africa: The Logic of the Coup-Civil War Trap” and “Why Comrades Go to War: Liberation Politics and the Outbreak of Africa’s Deadliest Conflict.”

Roessler said that he first became interested in conducting research in Africa while on a trip to Kenya during the AIDS epidemic. That research led him to expand his work, and he eventually covered other African states.

Early on, he discovered that his research would involve personal interaction.

“My research is trying to understand the onset of civil war — so why a government ends up at war with its citizens who are organizing rebellion,” Roessler said. “So to understand this, I want to talk to the people. These guys know each other better than everyone, and they would take a bullet for each other in the past, and now they’re at war. They do open up about it, but it can be very emotional for them. So it kind of does put a human face on it.”

ITPIR’s Communications and Development Manager Morgan Goad said that the desire to give students a “behind the scenes look at how scholarship comes about” is part of what motivated them to organize this talk.

Goad also viewed the talk as a space to recognize Roessler’s recent work.

“To have two books come out within one semester is an achievement worth celebrating,” Goad said.

Roessler directs the Center for African Development, an ITPIR department that focuses on research projects in Africa.

Abigail Nickerson ’20 plans to major in applied mathematics but attended the talk for her course on international development.

“It was really interesting to me because I don’t know too much about conflicts in Africa,” Nickerson said. “War is not just anarchy; there is actual strategy to it and a lot we can learn about it.”

Roessler responded with a quote from a former United States president to describe the final impression he wanted to leave with the audience.

“Some good advice is something that Lyndon Banes Johnson said: ‘You ‘gotta be lucky and plucky,’” Roessler stated. “Plucky meaning you have to work hard, you have to have grit, you have to create opportunities for yourself. But then you hope that fortune looks down on you and favors you and gives you opportunities. I think the takeaway is that if you work hard, you put yourself in the position to do that.”