Home Latest News Around the 'Burg Stepping up to the plate: Williamsburg seeks to integrate economy with sports... 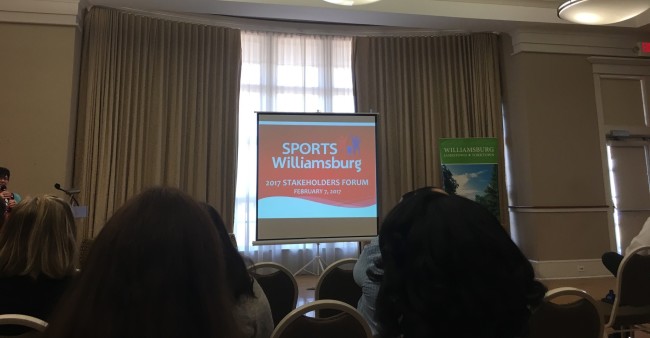 Sports Williamsburg, an organization dedicated to improving Williamsburg’s economy by integrating the sports industry into the surrounding city, held a meeting for stakeholders Feb. 7.

City of Williamsburg City Council member Barb Ramsey ’75 listed a renewed focus on sports tourism as a way to grow the City’s economy during her April 2016 bid for a seat on City Council.

Sports Williamsburg is a division of the Chamber of Tourism Alliance. The organization works with Williamsburg Parks and Recreation, the Williamsburg Police and Fire Departments and the Virginia Department of Transportation to host sports events within the city and the Historic Triangle.

“The Sports Williamsburg mission is to establish our destination as a top five year-round sports destination within Virginia,” Director of Conference Sales and Sports for the Greater Williamsburg Chamber and Tourism Alliance Lisa Pacheco said. “Our goals are to grow the economic impact of sports each year by five percent, continue to manage strong repeat sports events, promote our sports destination to influential event holders and build up our reputation for high quality events in both youth and adult sports.”

According to a study done in 2015 by the National Association for Sports Commissions, the sports travel industry is worth $10 billion and has an annual growth rate of 6.5 percent.

Sports Williamsburg maintains partnerships with local cities and organizations to build relationships and encourage teams to host their tournaments in Williamsburg. Local attractions and restaurants participate by offering discounts to athletes and their families.

“Our Parks and Rec [employees] maintain the most contact with our clients during the events and the City’s Economic Development Authorities help in negotiating rental fees and bid fees,” Pacheco said. “Our police and fire [departments] create race routes, emergency plans and they also provide safety to the athletes and to our local citizens. The Virginia Department of Transportation has the final route approval for all of the roads including road closings and detours that we may need.”

Sportsimpacts President Patrick Rishe conducted a study in Williamsburg and found that between 2014 and 2015, there was measurable amounts of new money brought into and maintained in the area. The impact in 2014 was between $8 million and $10 million and in 2015 was between $9 million and $12 million. During 2016, Williamsburg hosted a sporting event every month and hosted almost 50 groups from across the United States.

Frank Hopka, a member of the National Softball Association, spoke in a video at the Sports Williamsburg Stakeholders Forum about the benefits of hosting sports tournaments in Williamsburg.

It’s no secret Williamsburg is a great vacation destination and more and more sports tournaments are centered around vacations for the family, not just coming in for the weekend and playing ball,” Hopka said.

“It’s no secret Williamsburg is a great vacation destination and more and more sports tournaments are centered around vacations for the family, not just coming in for the weekend and playing ball,” Hopka said. “Be it the outlet malls, be it other retail places, the parks attractions, all of that plays into teams, parents and coaches picking Williamsburg along with the facilities that we have to play the sport.”

Rev3, a triathlon series hosted nationally and internationally, is holding their fifth Williamsburg race in July 2017, and Sports Williamsburg plans to host a free kid’s race to supplement the event. There has been a 120 percent increase in the preregistration for the event since last year.

Additionally, the National Softball Association is holding their World Series in Williamsburg in July and will be hosting teams from the United States and Canada. Sports Williamsburg is also hosting a pro-cycling race in August.

“We are going to be the start of this four-day event,” Pacheco said. “This is a huge opportunity for us to establish ourselves in pro-cycling with major TV coverage. We’re going to have thousands of racers, spectators, teams, and we’re estimating the direct economic impact to be at least $3.5 million.”

The sports travel industry also impacts local businesses and restaurants. Anna Lisa Dill, co-owner of Anna’s Brick Oven restaurant in Williamsburg, said in a video presented at the Sports Williamsburg Stakeholders Forum that the sports industry has helped to expand her and her brother’s business.

“I can definitely tell you that during the off season in Williamsburg we’ve really gotten a lot of sports groups that come,” Dill said. “We’re not as busy as we’d like to be, and teams fill our rooms up on the weekends and stuff so it really does help a lot and we do a lot of banquets and team dinners and stuff so it really makes a huge difference in our business throughout the year.”

Sports Williamsburg hopes that by bringing in new teams from all over the country, they can attract revenue for the city and help local businesses flourish. They expect to continue their progress in the next few years by building upon existing events, strengthening their relationships with their partners and increasing their marketing.

“We want to develop and share a comprehensive sports calendar with our municipalities for 2017 through 2020 for everyone to access,” Pacheco said. “We want to conduct and publish a complete sports facility inventory, and we want to create a searchable venue database for our event holders.”

In 2018, Sports Williamsburg plans to bid on large rotational sports events and increase funding for their grant program, which they use to promote tourism and increase the economic impact of sports in Williamsburg. They would like to bring in more adult sports and diversify those they currently offer by adding golf, cycling, fishing and pickleball.

“We are definitely an area that has great sports venues, lodging, dining and shopping but we also have unique tourism attractions,” Pacheco said. “We have amusement parks, we have museums and historical sites and other destinations don’t have that and that really helps us in the bid process because we are a destination that can show that we’re more than just the tournament.”