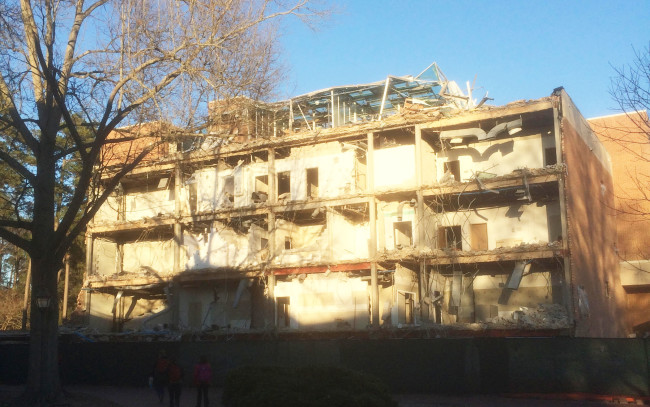 Over the next two years, the College of William and Mary will break ground on construction projects and review architectural designs for projects to send before the Virginia General Assembly. Demolition, renovations and designs for new buildings will manifest across campus from One Tribe Place to the proposed Fine and Performing Arts Complex.

Construction on the Integrated Wellness Center is planned for April 2017, with an estimated completion date of April 1, 2018. According to Director of Facilities Planning, Design and Construction Wayne Boy, construction will begin after Commencement, which is scheduled for May 13.

This project’s goal is to create a “holistic health center” which houses the Student Health Center and Counseling Center under one roof.

As of now, the budget for this project is $17 million, and construction drawings are being reviewed by the College.

Boy said that construction drawings for Landrum Hall are due in the next two or three weeks and a builder for the project has been selected. With a budget of $17 million, construction on the residence hall will start after Commencement and is set to be completed July 15, 2018.

During the 2017-2018 academic year, Landrum Hall will not be a housing option for students, as the planned renovation includes a “true gut” of the building, replacing the windows and roof, and re-doing the gutters to prevent leaks in the top floors.

“One of my favorite parts of this project is that it will have a commons like Tyler [Hall] in the basement level,” Boy said. “It will be two floors and hollowed away like in Tyler.”

Other additions to the residence hall include air conditioning and glassed-in conference rooms for studying. At this time, the builder also estimates adding two beds through an updated floor plan.

After demolition plans to One Tribe Place were halted due to news that this demolition will require shutting the power off for two weeks, Boy said that the College will begin work in the next few weeks, with a goal of completing the demolition before Commencement.

The 1984 wing of the building was not up to the College’s building code when the College purchased the property formerly known as the Hospitality House. Water penetration damaged the 1984 wing and rooms under the hotel, such as the ballroom and restaurant.

This planned demolition will remove the 1984 wing with a budget of $4.447 million. Additionally, the College learned that the switchboard that much of One Tribe Place relies on is flooding, so over the summer months, the College plans on raising it upstairs away from moisture. This summer renovation will also include digging up the side alleyway, located in between The Green Leafe and the residence hall, to re-do the storm water drainage system.

From March to May, Boy said that the demolition of the 1984 wing will be restricted from 8 a.m. to 5 p.m. and not during quiet hours.

Following the Americans with Disabilities Act, the College will be completing a two-part construction project. The first part will add an elevator in Adair Hall, which will also involve re-locating the first floor bathroom. Boy said that he expects this project to be completed by the end of 2017.

The second part of the project will add “curb-cut” sidewalks, which are sidewalks designed for individuals in wheelchairs, around the Sunken Garden and between the Earl Gregg Swem Library and William H. Small Hall.

At this time, $2.889 million has been allocated for these projects, and Boy said it is not clear if it will fully cover both parts.

The first two phases of the Fine and Performing Arts Complex received funding from the Virginia General Assembly for $118 million. The third phase, which is included in the College’s Campus Master Plan, has not received funding yet.

According to Boy, design on the first two phases is underway. These renovations will create a new building in between Lemon and Hardy Halls and the Phi Beta Kappa Memorial Hall and renovate the existing space in PBK. The dance classes offered in Adair Hall will move to PBK, which will meet national accreditation standards for the College’s dance minor.

Music classes will move from Ewell Hall to the new building. Renovations to the existing space in PBK will add student theater spaces for extra performances, additional office space for professors and a larger box office.

The third phase will add a building between the Muscarelle Museum of Art and Morton Hall.

According to Boy, construction on updates to the Alumni House would ideally start in May 2018 and be completed by July 31, 2019.

All funding for this project is coming from private donors, which Senior Vice President for Finance and Administration Sam Jones said is estimated to be somewhere between $13 million and $21 million. Jones said that currently, the Alumni House is not meeting the reported needs of alumni, so the renovations would create support spaces for them as well as a larger gathering space.

This gathering space, as it is currently designed, would add 400 seats around round tables or 900 seats in a theater-style space. Boy said that he would like to use this three-story renovation to emphasize the Bright House, which is one of the current parts of the Alumni House.

The College is beginning a feasibility study, which will examine what the College can afford in terms of renovations to the Muscarelle Museum of Art. Boy said that this renovation will renovate the existing building and create a new addition that will extend towards Morton Hall to add space for more exhibits.

“One other thing that we will be doing is adding an entrance worthy of a gallery of that magnitude,” Boy said.

Jones said that this renovation will also be funded entirely by private fundraising and that an architect has been selected for pre-planning.

“We really would like this to be a space that serves as a complement to the Performing Arts Center,” Jones said.

Construction drawings are underway for the West Utility Plant, and construction is estimated to take place from July 2017 to January 2019. The pre-planning study will cost $1.3 million and the College will be asking the General Assembly for approximately $25 million to fund the rest of the project.

This new utility plant will support Swem Library and the new Fine and Performing Arts Center and will face Adair.

Construction will also take place on two best management practice sites, one by the Student Health Center and one on the Wildflower Trail behind Swem Library. Best Management Practices are acceptable structures that can be implemented to protect water quality and promote soil conservation.

Some, like the air system in the Crim Dell, are physical structures that can be installed. These renovations will begin in May and run through the end of the 2017 calendar year.

These will include dredging the Crim Dell to replace the air system and paving a gravel path behind Washington Hall and Ewell Hall for a total of $3.391 million.

Jones said that the William and Mary Real Estate Foundation is responsible for purchasing the Days Inn to be used as undergraduate housing, something that was announced in September 2016. Because the building was used as a hotel and was not designed for College use, the Real Estate Foundation must acquire a special use permit from the City of Williamsburg’s government.

When the Real Estate Foundation announced that they had purchased the Days Inn on Richmond Road, they planned to open it up for student housing as early as August 2017.

All of the City’s committees recommended “yes,” but with qualifications for whether or not the College should move ahead with using the building for student housing.

Early in March, the College will go before City Council to ask if 180 students could be housed in the hotel. Earlier in February, the City’s Planning Commission recommended that it was only fit for up to 80 students.

“We will have to see what City Council says,” Jones said. “Is it financially feasible for 80 students? No. We’d have to make significant renovations as is.”

Demolition of Millington Hall, initially halted because of remaining hazardous materials found in the building, such as asbestos, will be completed by July 24, 2017.

A pre-planning study for the Sadler Center addition is underway. Jones said that potential builders will be speaking with administrators whose offices are currently located in Campus Center to determine what space is needed for the planned 76,000 square foot addition.

While he said he is not sure if the College would go ahead with demolishing Campus Center afterwards, Jones said it is still a possibility.

“When you do a master plan, sometimes you’re looking 10 or 15 years out,” Jones said. “We were able to move quickly through the Integrated Wellness Center and now we start pre-planning for this. It all is moving quickly.”