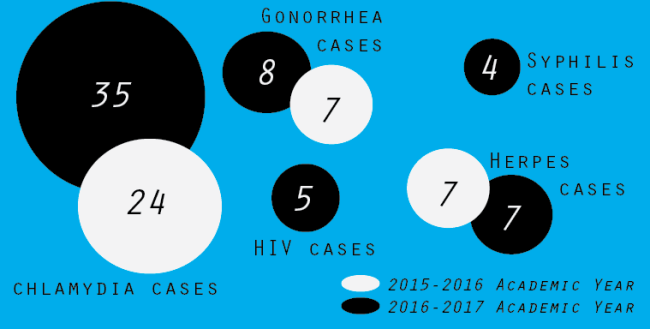 During the fall 2016 semester, what the Student Health Center considers an “epidemic of unprotected sex” occurred on campus at the College of William and Mary, resulting in an increase in the number of diagnosed cases of chlamydia that exceeds the national average as reported by the Centers for Disease Control.

There has been no cluster of cases in any particular dorm or among any group of students,” Wells said in an email.

“There has been no cluster of cases in any particular dorm or among any group of students,” Wells said in an email. “It involves all classes from freshmen to graduate students. On campus and off campus residence halls. It is preventable. The plan is personal accountability. There is no outbreak. Our goal in reporting the numbers to the students was to raise awareness to the consequences of unprotected sex… including herpes, syphilis and HIV.”

After the Student Health Center noticed this fall’s increase in diagnosed cases of sexually transmitted infections, physicians decided to hang posters featuring these numbers in the Student Recreation Center, interfraternal Community Building and in some residence halls.

“By reporting the actual numbers to students we hope it will serve as an incentive to change behavior,” Wells said. “Our passive messaging encouraging condom use has not worked. This is real and hopefully powerful information that will change behavior and encourage personal responsibility. Knowledge is power.”

According to Assistant Director of the Office of Health and Wellness Eric Garrison M.Ed. ’94, this outbreak can be attributed to abstinence-only sex education that doesn’t include curriculum on comprehensive safe sex.

Garrison said that this outbreak happened this year, not due to a lack of condoms, information or financial access at the College, but because of an increase in population at the College in combination with a lack of sex education.

“We just have to keep on keeping on,” Garrison said. “We knew this was going to hit us. We have to encourage people to know their status, don’t wait for Student Assembly to pay for testing. This has just been a build-up. Sex is always easier to do than to talk about. A lot of times people don’t want to talk about their history.”

Once he has identified these populations, he said it is important for the College to continue to provide condoms and then to discuss safe sex with students who feel uncomfortable talking about sex. He said that he believes that students are consenting to sexual acts of which they don’t fully know the risks, including sex without a condom or other protective barrier.

“The College has a very important role in all of this,” Garrison said. “We have to provide condoms out the wazoo, we can have all the condoms, but if students don’t sit down and talk about sex with us that doesn’t solve the problem.”

Additionally, Garrison said that the College works to comply with national guidelines for safe sex, including the CDC’s order that condoms should be available 24 hours a day, five days a week to students.

Vice President of Sexual Health for Health Outreach Peer Educators Amy Zhao ’19 said that, while she was not sure of the exact numbers for STI diagnoses during the fall 2016 semester, she believed that looking at the increase in diagnosed cases might be misleading.

Many people are on other forms of birth control rather than using condoms (especially as of the last election), and see the usage of a condom as a means of contraceptive, rather than a way to prevent themselves from getting STIs,” Zhao said in an email.

“Many people are on other forms of birth control rather than using condoms (especially as of the last election), and see the usage of a condom as a means of contraceptive, rather than a way to prevent themselves from getting STIs,” Zhao said in an email. “Another point was how many students don’t feel the need to use a condom because in the case that they get an STI, they can treat it or recognize the symptoms and simply take medicine to get rid of it, like a common cold.”

Zhao said that one of the problems with this way of thinking is that people, oftentimes men, are asymptomatic with STIs and that there can be long-term consequences if an STI is left untreated, including infertility and nervous and immune system damage.

According to Zhao, HOPE’s response to this will be similar to that outlined by Garrison, because much of what the Sexual Health branch does is preventative work and programming. She said that HOPE will continue to have initiatives to increase access to free condoms.

“Students need to go to HOPE, their practitioners, the Counseling Center or their religious leaders to talk about this if they have questions,” Garrison said. “They need to know that there is no judgement.”